Pebble Time Round Review: Should You Buy It? 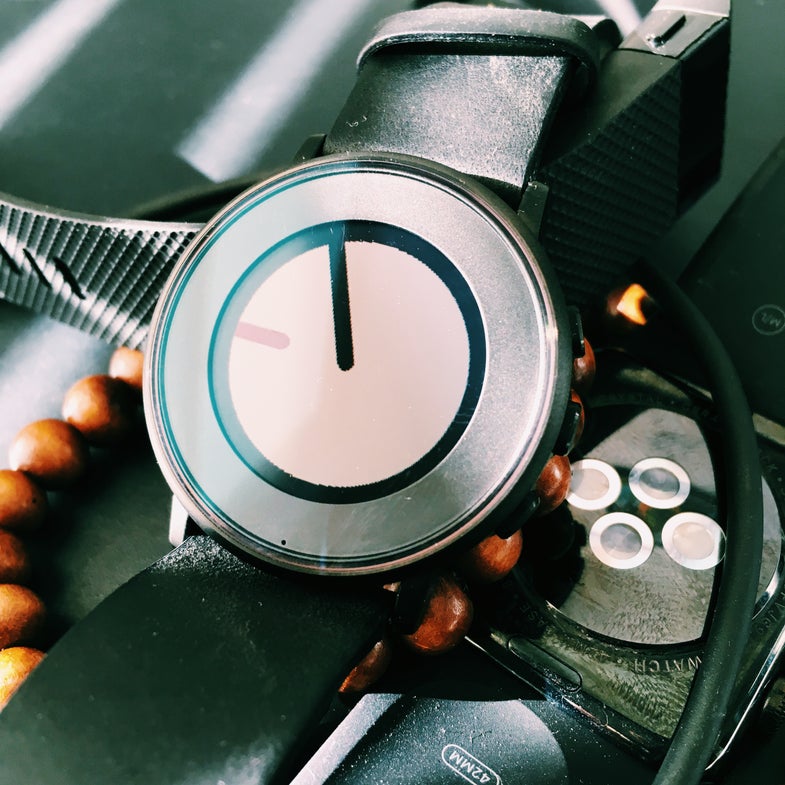 Pebble was making smartwatches long before it was cool. While Apple and Google played to their strengths (luxury design and open platforms, respectively), the Kickstarter-company-that-could never wavered in its commitment to building a reasonably priced smartwatch. Following the release of its first smartwatch in 2012, the company followed up with the Pebble Time in May of 2015. Shortly after, in August of the same year, the company released the Pebble Time Steel. Now, the company’s newest device, the Pebble Time Round, builds on the success of its older devices. With a razor-thin circular screen and great battery life, the Time Round proves that Pebble has staying power despite competing against tech’s biggest companies. Here’s what it’s like to use it as a primary wearable for a month:

But smartwatches are more than just tiny computers—they’re watches as well. The Time Round employs a standard 22mm band opening, so you can swap it out for a regular watch strap of your choosing. Proprietary bands like the ones used on the Apple Watch or Samsung Gear S2 can’t be swapped out for regular watch bands, which means there are less options to choose from. Customizability is one of the great strengths of the Pebble brand, and that extends to its watch bands. Pebble’s assortment of official straps can be found here. But if those aren’t enough, you can always swap them out for a different 22mm option. Just make sure the bands are separated to leave the charging port exposed. 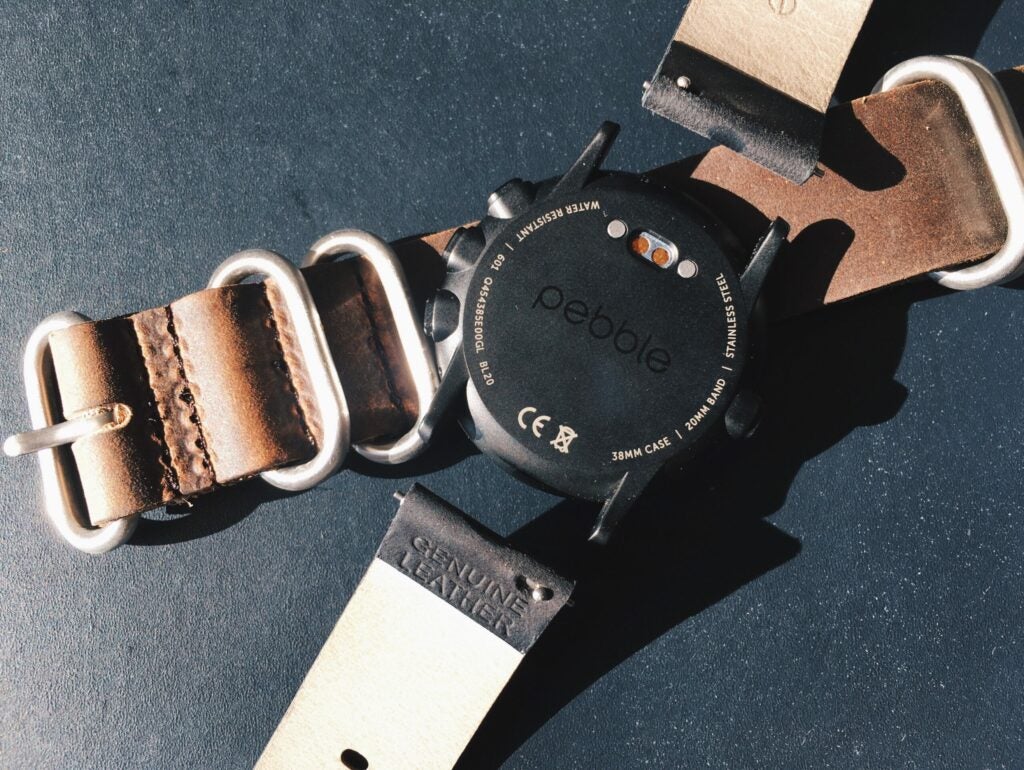 Unlike some smartwatches, the Pebble Time Round supports standard watch bands. Small prongs on the lugs make removing the default bands easy–though some cutting may be required to get the lugs out. Make sure your strap leaves the charging port exposed.

The Time Round—like Pebble’s previous devices—makes use of side buttons. Pebble chose to forgo the use of a touchscreen since its first smartwatch in 2012, and it’s sticking to that decision to this day. Some may prefer Pebble’s decision to keep the device simple, but in 2015, screens that you can navigate via touch feel most natural. Especially when having to firmly press watch buttons result in pinching arm hair every single time. Damn you, arm hair. We’d prefer a touchscreen or at least an option to pay more for one.

A Window Into Your Pocket, On Your Wrist

The killer app for the Pebble, and smartwatches in general, continue to be notifications—saving you from digging for your phone when you’re on-the-go. Before notifications can get sent over, you’ll need to pair your Time Round to the Pebble app on your iPhone or Android device. When using with my iPhone 6S, I consistently had trouble when the connection required me to tap my Pebble against my phone. In a new update however, all that’s required is holding the watch near the phone and this works much more consistently.

During actual use, the Pebble came in handy when I was walking and carrying groceries or at my desk. For the latter, glancing at incoming notifications without unlocking and being distracted by my entire phone is an underrated feature. Quick glance, then back to work.

The Pebble Time Round’s use of an e-paper colored display makes it very usable in strong daylight and well-lit settings. Smartwatches with actual LCDs with rich colors look much better when viewed in the dark, though Pebble addresses this by making use of a backlight. If you plan on using your watch in the dark frequently, the Time Round can handle it, but there are better options. If you’ll primarily use a wrist device in daylight or brightly-lit environments, the Pebble Time Round will look better than all competitors. 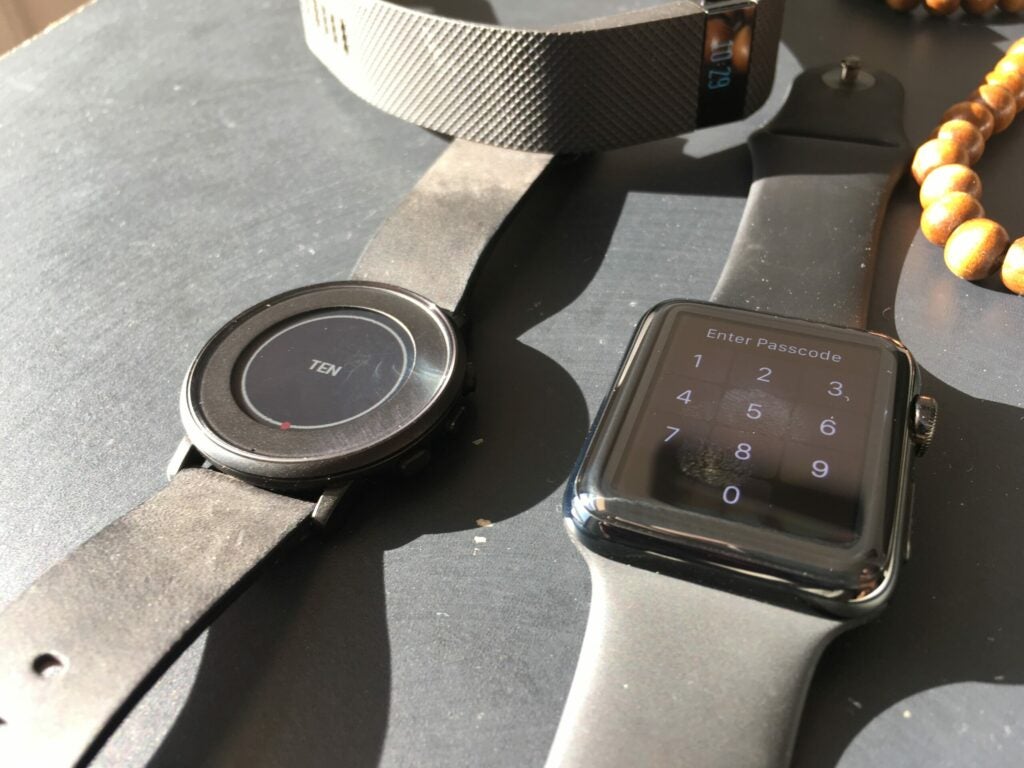 The Apple Watch is visible in broad daylight, but the Pebble Time Round shines under these conditions. No smartwatch is clearer in brightly-lit situations. Slight scratches on the Pebble’s screen however show the usefulness of Apple’s sapphire glass

As for notifications themselves, the Pebble Time Round serves them reliably. On our iOS device, we saw incoming messages, reminders, and more relayed consistently. Unlike the Apple Watch, users are unable to choose which notifications get sent to the watch and which your wrist will spare you—it’s either all or nothing. Fortunately for Android users, it’s easier to choose notifications on the Android version of the Pebble app. 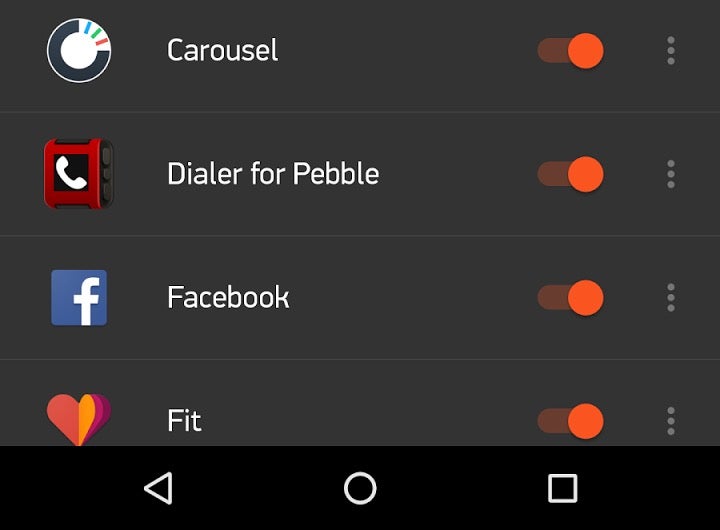 Pebble Time Round on Android

Tighter integration on Android than iOS is a running theme with the Pebble Time series of watches. Due to Apple’s restrictions, non-Apple Watches are allowed to show messages you’ve received, but you can’t respond to them. Save for the recent addition of sending SMS messages if you’re on AT&T, Pebble’s devices can’t respond to texts or iMessages. For many iPhone users, this could be a dealbreaker.

Apps On Your Wrist

Smartwatches are great at serving up notifications, but many consumers hope to get more out of them with customized applications. Pebble offers several third-party applications for its smartwatches through its companion app. The Pebble Time Round features many apps you’d expect on a portable, smart device. Apps like Alarms, Stopwatch, Uber, and ESPN are all available for in Pebble’s app marketplace. Some applications like XKCD make use of the e-ink-like screen to show crisp comics on your wrist. Though—like most smartwatch apps—with the full experience available on your smartphone nearby, you might as well use that. Quick check-ins using apps like Foursquare’s Swarm does make a bit more sense, however. 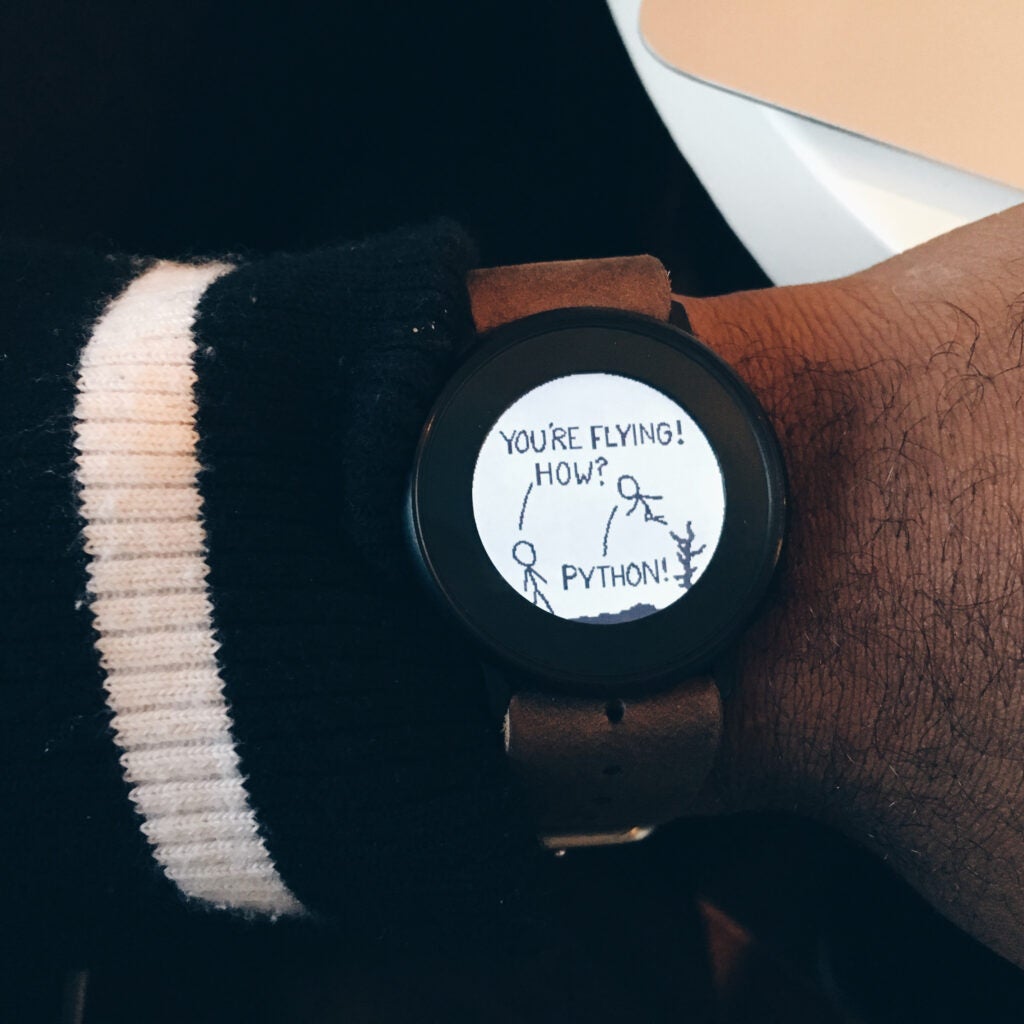 XKCD can be read on the Pebble Time Round. If you’re into that sort of thing.

Much like visibility in bright environments, the Pebble Time Round’s battery life is one of the best in the business. The e-paper screen only uses battery life when changing what’s on screen, not from keeping the display on. Therefore what you see on-screen will only change when it needs to. While your notifications—which could be private—remain visible at all times until addressed unlike other options, this also leads to stellar battery life. The Pebble Time Round lasted us, on average, around 3-4 days during normal use. While this ended up being shorter than the 6-7 days I received out of the Pebble Time, it still trumps every other smartwatch in this respect. I didn’t mind having to charge the Time Round twice a week.

For $249, the Pebble Time Round is a great entry-level smartwatch for those that simply want a heads-up of the notifications firing off in their pocket. I found myself using the device as a watch first that I occasionally paired with my phone for notification-serving when the situation called for it. Like most wrist wearables, being able to swap the watch face made the Time Round fun to wear as a daily driver—even if we did wish it came in a larger size option like Apple and Motorola’s offering. For those who aren’t quite sold on the smartwatch craze, the Pebble Time Round is a great choice for testing one out. It’s a good bang for your buck—and it looks great too.