Smartwatches aren’t meant to become family heirlooms. Here’s how to pick the best smartwatch when trading up to the latest model. 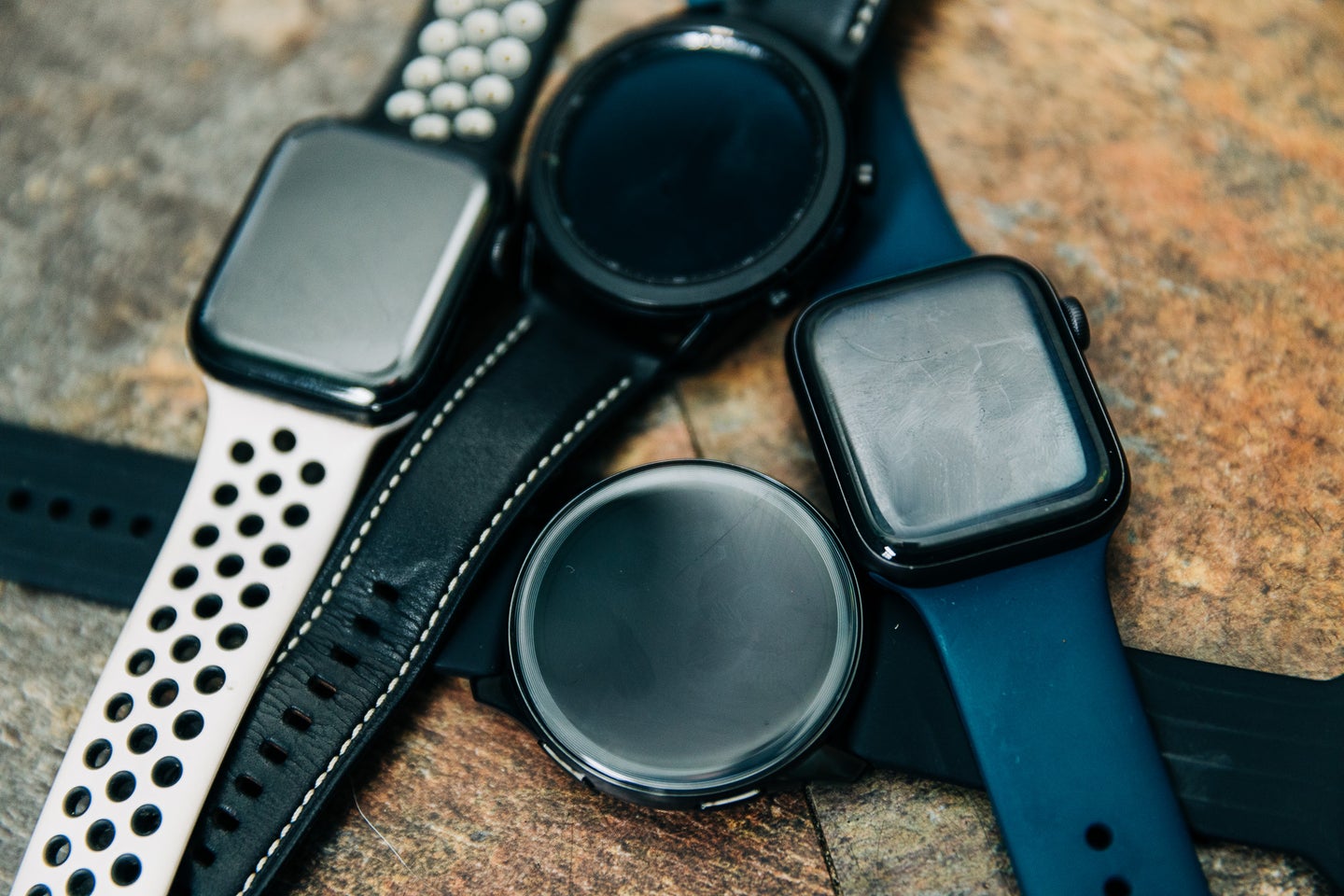 There are more smartwatch options on the market than ever. Stan Horaczek
SHARE

The first iteration of smartwatches were forced to emulate the PC experience. It was the late ’90s and smartphones were still far off in the future. Deciding how to pick the best smartwatch was simple because there weren’t many out there. Those first-generation models had clunky folder systems and limited user interfaces, which made them more of a novelty than a game-changing breakthrough. The Seiko Ruputer (also known as the OnHand PC) was introduced in 1998, and could connect to a PC and run limited applications. You actually controlled the bulky and unwieldy device with an eight-way joystick below the screen. It could make to-do lists, write memos, and even use a primitive version of MS Paint.

The smartwatch has evolved tremendously since then, and now the product cycle is shorter than ever. That model you bought several years ago may still suit your needs, but it could also be missing out on cool, useful new features. But, upgrading isn’t always as simple as buying the latest and greatest version of what you already have.

How to pick the best smartwatch

Smartwatches have evolved to the point where there is more to the category than just “a smartwatch.” There are variations, hybrids, specialty devices, and more depending on your specific needs, wants, and use cases. Maybe you want better access to messaging and social media apps. Perhaps you’re looking for a workout tracker to keep tabs on your hardcore CrossFit workouts. Then there are people who want to head out into the wilderness with their watch. Finding the right one requires a sense of your own tendencies and proclivities, but there are certain key elements that relate to all smartwatches that can help narrow your figure out how to pick the best smartwatch and answer lingering questions.

Your smartphone has already made your first major decision when you’re deciding how to pick the best smartwatch. In order to sync and, well, even use your smartwatch, you have to pair it with a compatible device. Apple smartwatches, for example, will only provide access to all of their features when paired with an iPhone. But some, such as smartwatches made by Samsung, Garmin, Fitbit, and others can work with both iOS and Android devices. There are Android smartwatches that run on Wear OS by Google (formerly known as Android Wear) that include options from major designers such as Fossil, Michael Kors, Ticwatch, and others, while Samsung relies on its own operating system called Tizen OS.

This year, at its I/O developers conference, Google announced that it’s collaborating with Samsung to combine Wear OS with the Tizen platform to create one massive anti-Apple wearable leviathan. Still, Samsung has committed to three years of security updates on its current Tizen models. In the future, however, Tizen will be no more.

Currently, both Wear OS and Tizen work well with any Android phone of recent years, and also work with iPhones at least to get notifications from your iPhone on Tizen and Wear OS (but you won’t be able to access apps like Apple Health). Google Fit also isn’t available on iOS (though Samsung Health is). Wear OS has Google Assistant and Google Pay, while Tizen devices offer Samsung Pay. Heart rate monitoring is available on both platforms as well.

When it comes to Tizen, you have access to all of Samsung’s own apps and a small number of third-party options, including Microsoft Outlook and Spotify. You’re covered for the basics like a calendar, an alarm clock, reminders and music, you just don’t get much else (or any Google apps). Aside from Google’s own apps, Wear OS devices include Spotify, Outlook, Dark Sky, Todoist and Uber. At the end of the day, it’s about specific preferences more than anything. There are plenty of parallel apps and programs available no matter what OS you choose.

How to pick the best smartwatch touchscreen

Most people already have a certain comfort level with touchscreen devices thanks to their smartphones. It seems only natural that they would expect their smartwatch to have the same level of interface. That’s not true in every case, though.

For one, a smartwatch screen is considerably smaller than a smartphone. People who have difficulty seeing small words or images may find the touchscreen difficult to navigate. Others may feel like tapping apps and scrolling on a watch feels clumsy compared to buttons. There are some watches, like the Apple Watch, that offer a little bit of both (although they are clearly designed with touchscreen as the primary method of interaction). If you are looking for style over function, consider that most hybrid watches—most of the Fossil smartwatch lineup, for example—typically opt for button control and offer limited to no touchscreen capabilities. Some smartwatches also have more purpose-driven displays. Consider devices like the Garmin Instinct Solar watch—which actually draws power from the sun using its displays.

If you’re already using a smartwatch, you probably already have a good feel for whether or not you prefer a smartwatch. Newer models, however, sometimes offer more screen real estate, which can make navigation easier. If you’re still on an Apple Watch series 3, for example, moving up to the Apple Watch Series 6 can get you an extra 2 mm of screen to work with.

Do you want a workout partner or a business partner?

Most modern smartwatches feature fitness apps front and center. They monitor heart rate, count steps, and even provide coaching. The Apple Watch, Garmin fenix 6, and Samsung Galaxy Watch Active2 are lightweight, water resistant, and allow for detailed data collection and logging so you can track progress. They are also designed to be slim, and usually feature wristbands intended for sweaty, active use—unlike less fitness-inclined smartwatches which can feel out of place in the gym. Cheap smartwatches may look cool, but they’re not meant to stand up to endless rounds of burpees.

If you don’t need the best fitness smartwatch, the next most important consideration is app compatibility. Business and entertainment applications are typically sparse on fitness smartwatches, but they thrive on more advanced models. Choose something that offers access to the apps you want.

You may also be looking more at hybrid smartwatches, such as the Fossil Latitude, which will offer limited fitness tracking but is more inclined toward looking stylish and allowing you to access messages and notifications more easily.

How you intend to use your smartwatch goes a long way toward narrowing down your style choices. The Apple Watch ecosystem, for instance, offers two sizes and endless bands. The Watch itself, however, is the same rectangle that everyone else has.

One of things potentially keeping people from taking the dive into smartwatches is how a lot of them look—they tend to look more like wearable tech than a fashion timepiece. For those, there are stylish options like the Skagen Jorn Hybrid, which wears its smartwatch functionality subtly. However, options such as the Samsung Galaxy Watch Active2 nicely split the difference between a fitness smartwatch and a fashion accessory. As the category has evolved, the options have opened up, allowing for increased flexibility around your personal style.

In addition to the overall look, consider a smartwatch that has customizable features. This can range from the ability to easily change the watchband, to the option to “bump up” frequently used features. The Fossil Latitude, for example, allows you to put your choice of three specific apps on the “home” screen, so you can prioritize, say, step counting and heart rate above weather alerts and email notifications.

Get the most up-to-date sensors

Most smartwatches have a standard suite of sensors inside. Almost all of them will include an accelerometer to help track your movement, as well as GPS to keep tabs on your location. Some models change their sensor arrays from generation to generation.

For instance, if you’re still using an Apple Watch 3, you’re missing out on the ECG sensor that can closely monitor your heart rate, as well as the blood-oxygen sensor on the back of the case. Other models, like the Samsung Galaxy Watch 3, however, don’t make a huge hardware leap.

Even if you don’t get something totally new in terms of health tracking, smartwatches tend to improve their accuracy and sensitivity over time. Improved processing power and hardware can combine to offer the same basic features, but with much more reliable results.

Decide whether you really need to upgrade

It’s almost always fun to get a new gadget, but smartwatches aren’t budget buys. Even the most basic, non-junk models will typically set you back close to $100. Jumping up to a newer model will typically get you a more powerful device and more features. You have to decide whether those are features you’ll actually use.

Consider a top-of-the-line Garmin Fenix 6 smartwatch, for instance. It will be an upgrade from almost any fitness-oriented model on the market. However, it costs considerably more than basic models and you’re paying for things like detailed ski and trail maps. Some people will never use those. Maybe something like the much cheaper Garmin vivoactive 4 will fit the bill.

A good rule of thumb before upgrading: Ask yourself what your current smartwatch can’t do, but you wish it could. Then look for those features to guide your search.