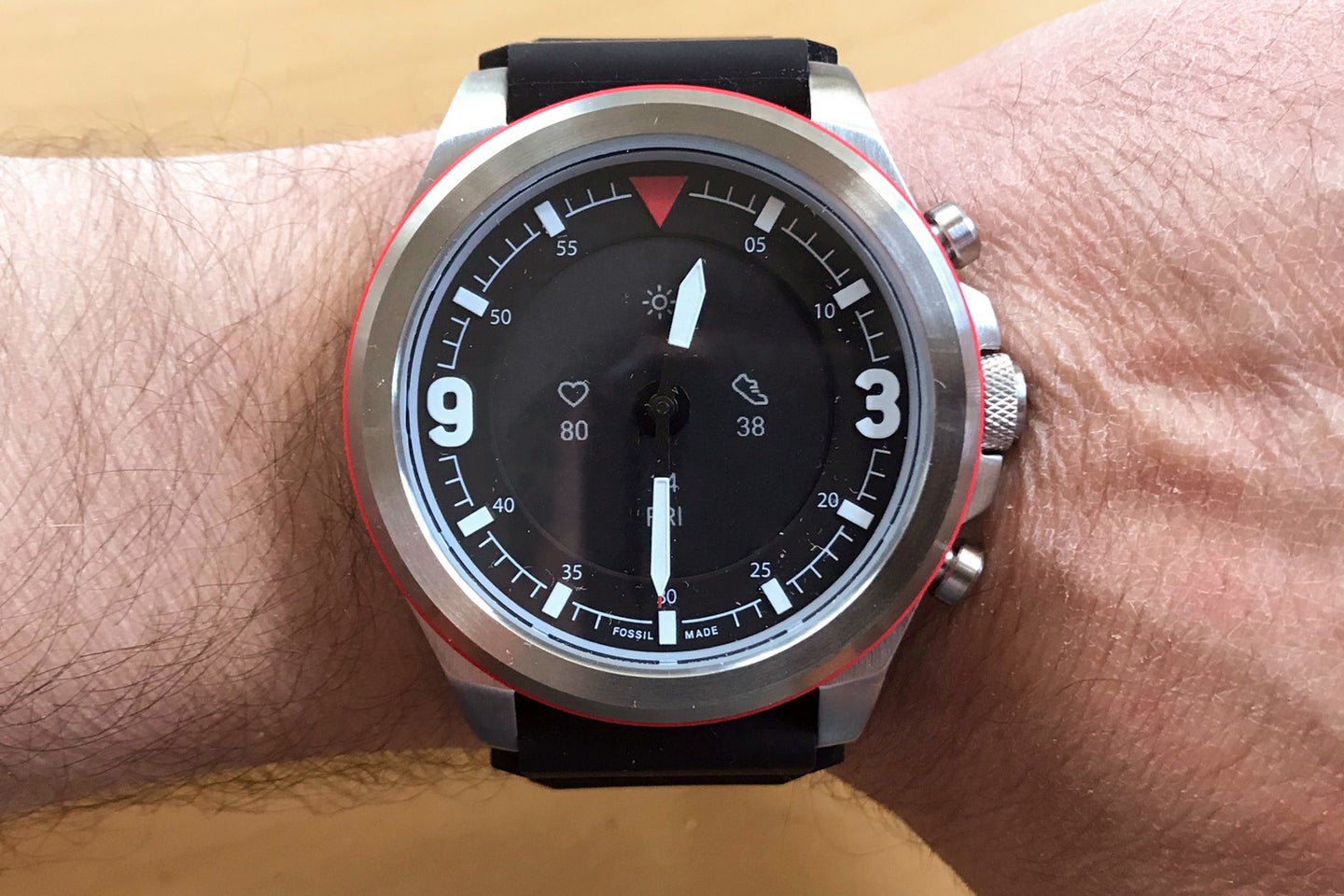 The face is clean and easy to read when there are no complications on it. Eric Alt
SHARE

Before a piece of technology becomes ubiquitous, there exists a period where you have early adopters going all-in on the shiny new toy and others who continue to cling to the old, comfortable ways of doing things. The smartwatch is still kind of in that phase, where some people are reluctant to give up their familiar watch for something that offers more functionality, but also potentially more complications.

Traditional watchmakers such as Fossil are doing their best to usher these people into the new era by manufacturing hybrid smartwatches that have the look and feel of traditional timepieces—showcasing classic mechanical action atop a display for features like step trackers, weather reports, plus text and email alerts, etc. The Fossil Latitude Hybrid HR—the most fully-featured of the Fossil smartwatch connected lineup with the inclusion of an always-on display and heart rate monitor—may not market itself as a “Smartwatch for People Who Don’t Like Smartwatches,” but it may as well.

A great smartwatch design for newcomers

Fossil has long been known for making stylish—but ultimately straightforward—watches. The company puts years of design experience behind its Fossil watches, and the end result shows. The Fossil Latitude Hybrid HR has the heft of a good sports or diving watch, and it doesn’t scream “smartwatch” on your wrist.

Right out of the box, the most striking thing about the Hybrid HR—like all the Fossil Latitude lineup—is, well, how much like a watch it looks. The hybrid Fossil smartwatch we tested was black and silver, with red highlights. It was simple, classic, and could easily be paired with work clothes or workout clothes. It simply looks like a quality timepiece, smart capabilities aside, which is to be expected for a timepiece that retails for $195.

The analog arms and large watch face are easy enough to read without any backlighting or digital display, and the watch’s 50mm case has considerable heft to it. It feels sturdy. The main drawback to this as a smartwatch is its weight. The Hybrid HR clocks in at a relatively hefty 5.6 ounces, which is considerable when measured against the Fitbit Versa 2 (1.41 oz) and the Apple Watch (1.07 oz); again, more in line with a “regular” Fossil watch that is typically around 6 ounces. The addition of extra weight renders some of its activity and fitness tracking capabilities moot, as it’s not comfortable as an all-out fitness accessory.

The silicone watchband of the Fossil Latitude likewise feels sturdy and comfortable. At 24mm wide, it sits comfortably and doesn’t irritate nor does it feel like it’s ever in danger of overstretching or wearing out during typical day-to-day activity or even moderate exercise. Being a standard band size, as well, means it’s swappable based on your preferences.

The eyes have it

The Hybrid HR uses an e-ink display like the one you’d find on a Kindle, so it doesn’t glow like the OLED on an Apple Watch. This is a standout feature, because it can remain on all the time without eating up the battery life as greedily as a powered screen. The only drawback is that e-ink has a slow-ish refresh rate, so it may feel a bit sluggish compared to lit screens. Still, it’s easier on the eyes, but it can make the digital readouts tough to see at a glance. A firm double tap on the crystal kicks on a backlight in these instances.

The best feature as far as the Hybrid HR’s overall design is how the timepiece handles switching between traditional watch functions and the digital display. When you press the main side button to access digital information, the hour and minute hands automatically go to 9 and 3 to get out of your way.

If easing into smartwatch use is your plan with the Hybrid HR, then you will not be disappointed with this Fossil smartwatch. All you really have to do is download Fossil’s smartphone app, which is compatible with Android devices running OS 5.0 or higher and iOS devices on 12.0 and up. Once you do so, it walks you step by step through syncing and customizing your Fossil Latitude watch.

The watch also comes with a USB cord for magnetic charging/syncing with a desktop device for downloading music or aligning calendars. Only two to three hours on its USB charger should provide a full, lasting charge of its lithium-ion battery. That juice-up can last well over a week: We tried the Hybrid HR with a fairly consistent amount of use and made it about 11 days before the battery was depleted.

Like other offerings in the Fossil Latitude line, the Hybrid HR doesn’t have a ton of customization options, but it does allow you to prioritize certain functions and make them easier and quicker to access. The readout on the watch face itself is minimal, based on the company’s custom software, as opposed to a more robust OS like Google Wear. So, for example, if you intend to use this primarily for fitness, you can make activity trackers (such as steps and heart rate) your default display. If you are more interested in weather reports, you can bump those up easily as well. Through the smartphone app, you also select the apps you’d like to receive messages from—such as Gmail, Facebook Messenger, and even Slack—and you can set the watch to receive all messages from everyone, or only from favorite contacts.

The learning curve with the Fossil Latitude Hybrid HR comes from getting used to which buttons on the watch itself do what. The main “big” side button is the “enter” button in most instances, which is different from other hybrid smartwatches that tend to use that as the default “back” button. Because the Hybrid HR’s crystal isn’t a touchscreen, scrolling is also button-based: the other two smaller buttons act a bit like scrolling cursors.

The rest of what you need to know

Although not the most sophisticated or detailed smartwatch available—being a hybrid, it is a bit of a dilettante—it combines enough to convince you of its usefulness beyond telling time.

The step tracker and heart rate monitor provide some insight, but the fact that it isn’t the best fitness tracker (coupled with its overall bulk), which will likely make it a poor substitute for a dedicated monitor if you’re focused on highly accurate tracking. We used the Hybrid HR only for light activity (brisk walks, jogging), but did appreciate that you can set a “Challenge Profile” through the app to establish fitness goals, such as number of steps per day). The information is also easily accessible in the app and even displays alongside a handy calendar for keeping tabs on progress.

The Fossil Latitude Hybrid HR features an alarm clock function, text alerts, and the ability to sync with social media for notifications. You are able to accept text messages and emails, control music, and access a calendar and weather alerts. It’ll also notify you of incoming calls, but there is no speaker or microphone on the watch itself, so you’re not able to accept calls as you would an Apple Watch. When a call comes the watch hands move to their horizontal positions, with text on the screen notifying you of an incoming call, which you can accept or decline with a push of the side button.

It also has standards like a stopwatch. Again, not extremely deep or sophisticated—you won’t be able to sync up contactless payment, for example—but functional enough to do basic jobs.

So, who is the Fossil Latitude for?

At the end of the day, the Fossil Latitude Hybrid HR is a great option for those who wouldn’t mind a few bells and whistles, but maybe aren’t ready to dive into a full smartwatch. Overall, it’s a nice-looking timepiece first and foremost, with a few added functions, like the step tracker and heart rate monitor, etc., that may not be necessary for all folks. Hardcore fitness enthusiasts who want to track and accumulate data might find this Fossil smartwatch too bulky for use during exercise, and too slight when it comes to numbers and measurements. People who like the look and feel of a traditional Fossil watch, however, will appreciate the overall simplicity of the user experience. Weight is a factor, however: It’s not the kind of wearable that blends in and you almost forget it’s there. Overall, though, the Fossil Latitude Hybrid HR is very well-constructed and feels likely to survive as one’s everyday watch for a good long while.