The iPhone 7 Is Rumored To Tout New Dual Camera Feature 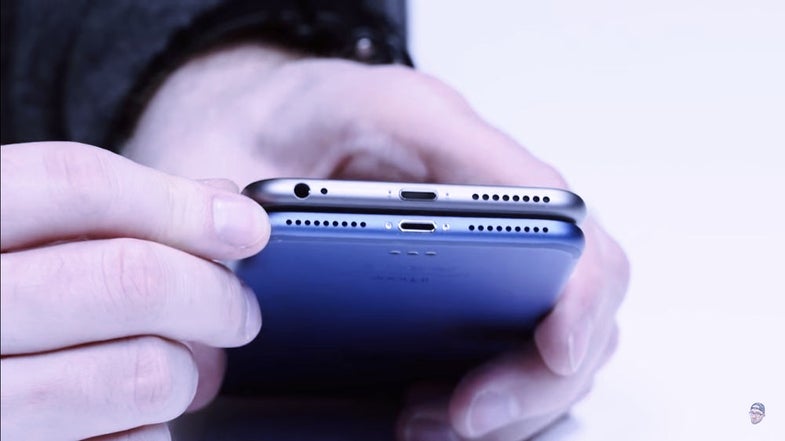 It's been rumored that the upcoming iPhone 7 won't have a headphone jack, forcing users to buy adapters or use the Apple-provided headphones that will potentially attach to the port that also charges the phone. In this image, a screenshot of a video from YouTuber Unbox Therapy, who claims to have a mockup of the iPhone 7 Plus, we see a blue iPhone without a headphone jack, a change in thickness, and a few other additions that you can read about here. But we won't know for sure until it comes out. YouTube
SHARE 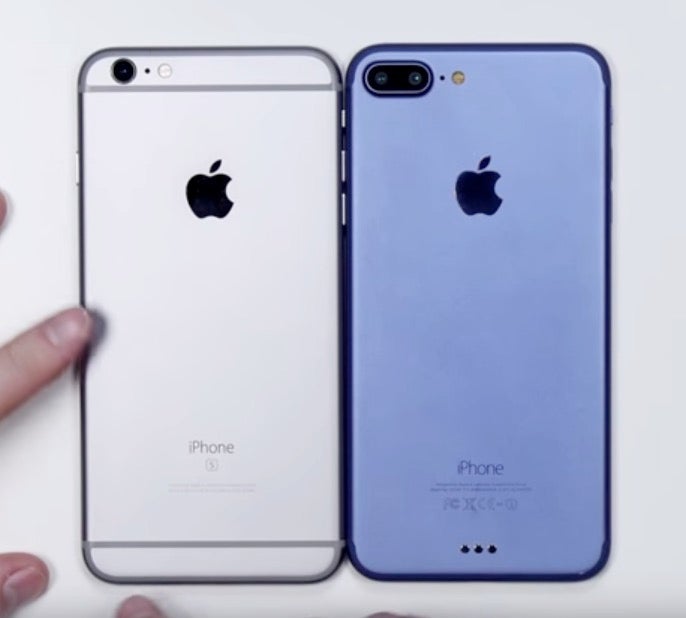 The iPhone 7 is rumored to release sometime later this year, and Apple’s flagship product it’s bound to be a big release for the company. Unlike the “S” upgrades iOS users have come to expect from the company’s tick-tock release cycle, the iPhone 7 would likely bring sizable changes to Apple’s smartphone lineup. And today we have a clearer idea of what to expect.

According to Mark Gurman over at Bloomberg, the iPhone 7 will tout a new dual camera design and an altered home button. But it won’t all be additions: the lead iOS device is set to come to users without a headphone jack.

While the regular-sized iPhone 7 may not tout the new rear shooter, a dual camera system could appear on the larger iPhone 7 Plus. Adding in the second camera, according to Bloomberg, is rumored to improve the photo quality of pictures produced by the new iPhone.

If Apple is secretly planning to take things to the next level, however, the extra camera could possibly enable Google Project Tango-like functionality. The search company’s Tango project allows devices to not just show the world around them when the camera is activated, but recognize objects in the real world too. An app that utilizes the camera can, for example, incorporate your furniture or food on the table into using the app. Or the ability to measure objects in front of you when you’ve misplaced your ruler. Enabling this, however, requires extra camera hardware. Like we’ve seen in the first Tango-supporting smartphone device: Lenovo’s Phab 2 Pro. With few devices incorporating this environment-recognition, including it in the iPhone 7 Plus could bolster the new device’s value.

Further updates could come to the iPhone 7 home button. Instead of the usual home button that can be physically pressed, the new device may support an unmovable Touch ID fingerprint sensor that is pressure sensitive. Much like Force Touch on the Apple Watch and 3D Touch on the iPhone, pressing in wouldn’t actually move anything. But, recognizing the user is pushing down, the home button would be able to mock a press of the button by bringing you back to the home screen. Unlike the current home button setup, a pressure sensitive touch area could allow for more than just one level of functionality. For example, pressing could bring users back home while pushing even harder could reveal the app switcher view. Similar to 3D Touch’s “peek” and “pop.”

But the most controversial of Apple’s changes to this latest iPhone is also the most prominent rumor: the iPhone 7 may ship with no headphone jack. The 3.5mm analog port used to plug in a pair of earbuds, over-the-ear headphones and even speaker systems will likely be eradicated from Apple’s smartphone lineup. Many have questioned Apple’s motives in removing the port, as the headphone jack is one of the most widely supported ports in all technology. Some would argue Apple started the trend of including standard headphone jacks on modern cell phones, when they originally released the first iPhone back in 2007.

While some say removing the headphone jack would allow the device to be thinner, others say we could see the company do this in an effort to make the device waterproof.

No matter what the company has in store for its users, all will likely be revealed at the company’s traditional September event. While Cupertino has yet to announce any details regarding when we can expect the iPhone 7 or details about it, the annual September gathering is presumed to be where Apple will bring iOS users details on the future of the company’s smartphone hardware. Who knows: perhaps we’ll also get details about unexpected iPhone 7 colors or even the new Apple Watch.