It will even learn to recognize your face, but sadly, not your dog's. 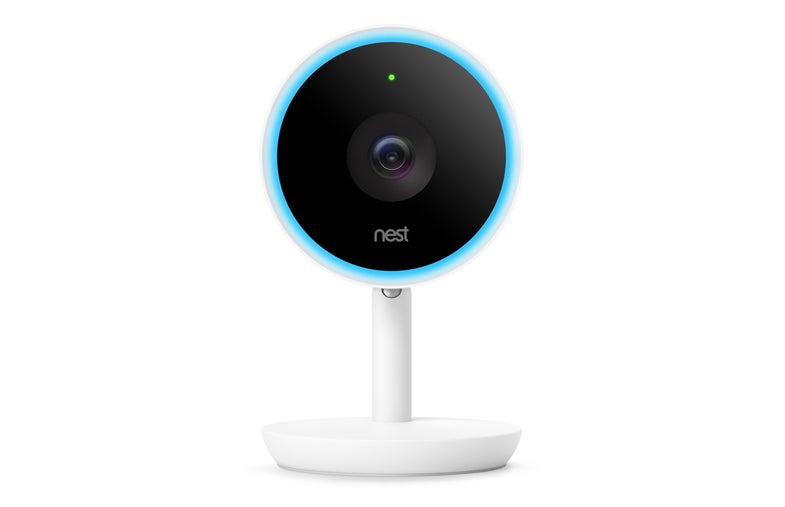 Nest’s new indoor security camera comes with more processing power, a fancier image sensor, and a host of unique features—including the ability to automatically zoom in on, track, and recognize specific faces.

The setup process for the IQ remains largely unchanged from previous Nest Cams. If it’s your first Nest purchase, you’ll need to download the iOS or Android app, create an account, and then add the Nest Cam IQ from the device list. You’ll be asked to scan a QR code located on the bottom of the camera and to choose the location you intend to use the camera (living room, bedroom, office, etc.). Once you’ve done that, it’s simply a matter of plugging the camera into an outlet and connecting it to your Wi-Fi network.

We pitted the IQ against other recently reviewed models, including the Logitech Circle, the Arlo Q, and the IQ’s predecessor, the Nest Indoor Cam, analyzing daylight and nighttime (infrared) image quality, motion sensitivity, and speaker and microphone performance. Because the IQ features an all new image sensor, we also tested its zoom chops and ability to recognize and learn faces.

Nest has always had a clear vision for what a home security camera should be. One of the more controversial aspects of this vision is the belief that they should always be recording. Unlike most of its competitors, Nest cameras don’t offer a free tier of video storage. Competitors like the Arlo Q and Logitech Circle do, in large part because they only record video (usually in 10-15-second spurts) when someone or something triggers them. If you want to access saved video recordings with a Nest Cam, you have one choice: pay an extra $10/month or $100/year for a Nest Aware subscription that will preserve your recordings for 10 days. If you don’t, you’ll simply get alerts and photo snapshots of recorded events.

We mention this upfront because it’s often a critical factor for those buying an indoor or outdoor security camera. Understandably, not everyone needs or wants continuous video recording. Nor do they want to be forced (or at least strongly coerced) into paying for a monthly subscription. On the other hand, if security is truly a priority, there’s a strong argument to be made for something that’s always watching, but that brings storage costs. Considering you’ll be paying at least a $100 premium for the Nest Cam IQ over other indoor security cameras, this difference is all the more relevant.

After spending close to a week with it, we can say that the $300 price is steep, but justified. The IQ is an impressive feat of design and engineering and a powerhouse of a security camera. Whether it’s the perfectly weighted base, or the adjustable hinge mechanism that lets you aim the camera in almost every conceivable direction, everything about the IQ’s design has clearly been thought through.

The IQ’s night vision performance is even better than the Nest Cam’s (which was already very good), as is the sound quality coming from its redesigned speaker. But perhaps the biggest draw is IQ’s new 4K, 8-megapixel sensor. This has the potential to cause some confusion, so it’s worth briefly elaborating on. The camera itself streams and records at 1080p, not 4K. The bandwidth storage required for the latter would simply be too prohibitive. Instead, the IQ uses that extra resolution to do things like track and zoom in on people it sees.

It does this extremely well for the most part. A feature called “supersight” allows the camera to zoom in on and follow people as they move through areas the camera is watching. The camera has a 12x zoom and when it comes to resolution, there’s simply no competition between the IQ and other security cameras. Faces remained clear and, most importantly, identifiable, even when zoomed in 6x. Others don’t come close to that.

The IQ can also learn to recognize specific faces. The camera took about two days before it consistently identified both people in our home. Sadly, it does not recognize dog faces. Depending on the setting you choose, you can have it send you notifications for familiar faces or just those it doesn’t recognize.

Not everything worked flawlessly, however. We received a few alerts featuring dramatic zoom-ins on our sofa arm and coffee table corner. But our main criticism is the same one we’ve had for all Nest security cameras. We get the push for continuous recording. But even with the addition of personal alerts (a feature you used to have to pay for), the IQ remains a highly questionable purchase if you’re not also committed to paying for a Nest Aware subscription.

There are clearly middle ground solutions here, whether it’s imbuing the cameras with the ability to offload video to a personal external hard drive, or including some sort of option that lets you to use your own personal Google Drive storage. Perhaps those will be options in the future. For now, the Nest IQ remains a smart, highly capable camera that a lot of people won’t be able to afford.

The Nest Cam IQ is without a doubt one of the most well designed and capable indoor security cameras we’ve tested. But to really take advantage of its smarts, you’ll need a Nest Aware subscription. That’s at least a $400 investment for one camera for one year. If you’re a well monied home security buff, the choice is easy: get an Nest IQ. If you’re not, there are options that make a lot more sense.