Doctors are wearing the new Google Glass while seeing patients

And a remote scribe does the busy work. 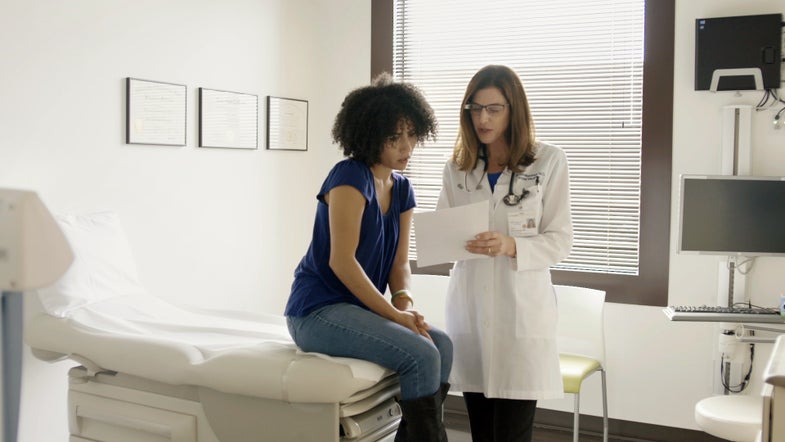 You could be forgiven for assuming that Glass, Google’s head-mounted augmented-reality device, had been effectively dead since 2015. But as Google’s sister company X, the Moonshot Factory, announced on Tuesday, the project has been pivoting to a business-to-business model over the past two years. The new, updated version of the device is known as Glass Enterprise Edition, and it’s been put to use at companies like Boeing, DHL—and in your physician’s office.

Going to the doctor today is “a pretty tragic experience,” says Ian Shakil, the CEO and co-founder of a company called Augmedix. Its platform enables physicians to wear Glass Enterprise Edition as they see patients, while remote medical scribes fill out the electronic medical records based on what they hear and see from the visit.

The doctor’s office experience is unpleasant, Shakil claims, thanks to all the time the physician spends looking at a screen and typing, as opposed to just focusing on interacting with the patient at hand. Augmedix’s message to doctors is: “Put on Glass, go have normal conversations with your patients.” Meanwhile, the audio and video streamed from the Glass go to a trained medical scribe, who may be located in a place like California, India, or Bangladesh, and whose job it is to fill in the electronic health records.

The integrated display on Glass can be used to provide the doctor with information about the patient in real time as they perform the examination.

The system is thus a fusion of a high-tech streaming service with a tried-and-true human component on the other end. And while it might seem like AI and voice-recognition software might be well-positioned to do a job like this, Shakil says that what the scribes are doing isn’t transcribing the visits word for word, which would result in a block of text, but instead producing a “structured medical note” from the conversation.

Some people will likely find it creepy that their doctor is beaming audio and video to a remote assistant, especially if they’re in their skivvies. But the final decision about the system’s usage is determined by the patient. It’s not a mandatory part of receiving care.

Patients are informed before they see the doctor that the physician will be using Glass, and have the chance to allow it or not—but Shakil says 98 percent do consent. As for that streaming video, it can be switched off at the appropriate times, and when the video is on, a green light clearly indicates that for the patient. The doctor can switch to audio-only mode to continue the note-taking without video, or the system can be shut off completely.

Augmedix first started using Explorer-edition models (that’s what it was called when it was marketed to consumers) of the device in 2013, Shakil says. Today, all their physicians are using the new Enterprise version. Over 1,000 people work at Augmedix around the globe, most of whom are the scribes or apprentice scribes, according to Shakil; nearly 1,000 physicians use it from the likes of healthcare organizations such as Dignity Health, and they’ve partnered with 12 health systems in total.

Google says that the new version of Glass has a better camera and battery, and more processing power. Instead of being marketed to individuals, as it was back in its “Explorer” days, Google is only selling it through partners like Augmedix for industry-specific uses, where they say it’s helping to boost efficiency at companies like DHL.

“Healthcare is increasingly a team sport,” says Shakil. Often there may be others in the room anyway, or specialists looking at your records.

“The era of you and your doctor, that private visit and no one else,” Shakil continues, “is really an antiquated view on healthcare.” In other words: good-bye, Norman Rockwell; hello, Glass Enterprise Edition.