From the meeting room to the track meet, the Amazfit GTR 3 smartwatch’s style and capabilities meet your needs. 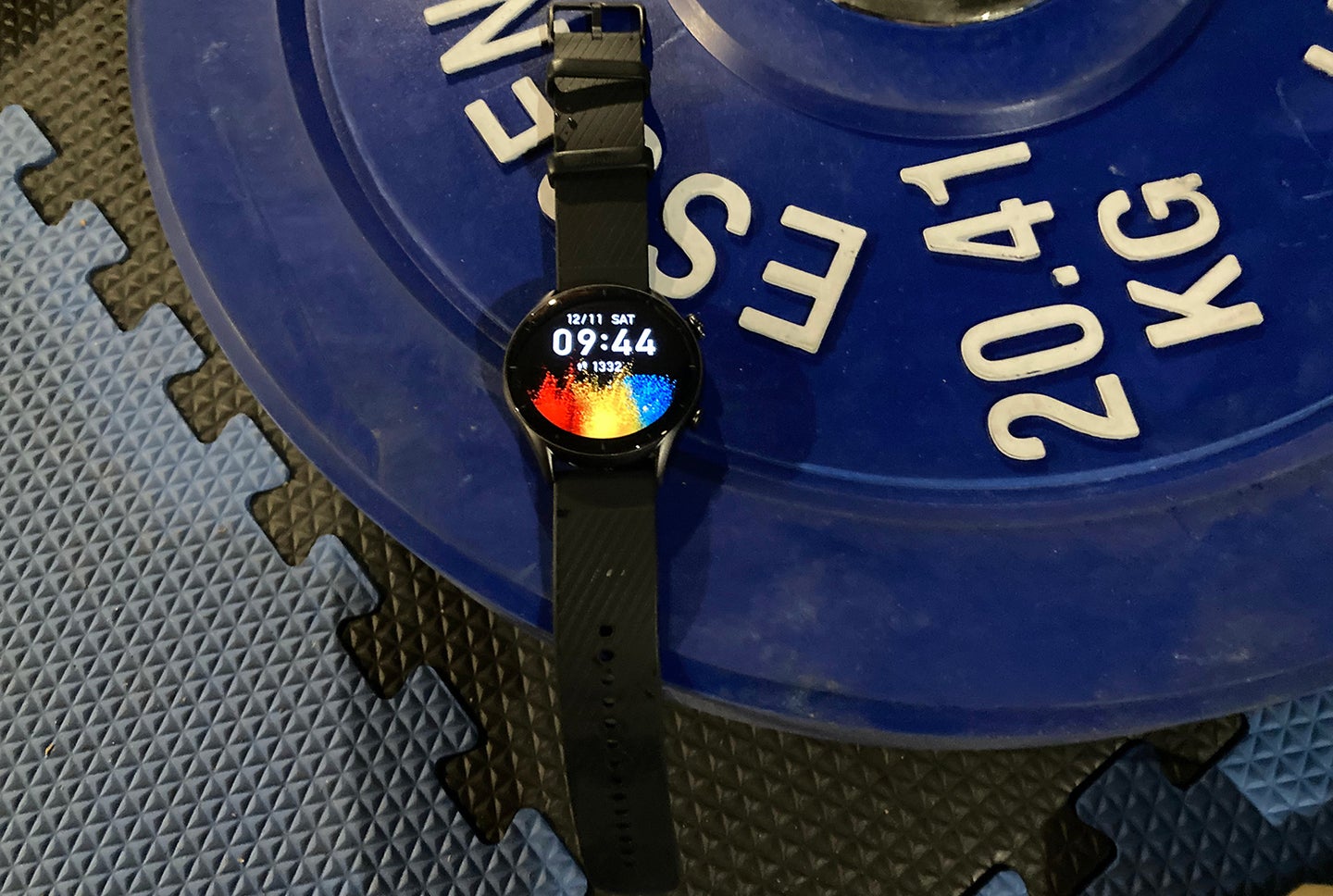 Looks can be deceiving. On its face—quite literally—the Amazfit GTR 3 smartwatch plays the part of sleek workplace wearable. It has a fashionable design with plenty of clean watch face options, an alloy build, and a nicely made silicone band with diagonal striping that all adds up to a sophisticated look. You’d be forgiven for thinking the GTR 3 is a smartwatch built for the office. But, actually, the Amazfit GTR 3 is somewhat lacking for full office efficiency. It’s limited in third-party app downloads, can’t be used for phone calls, and even getting text messages and app notifications required re-syncing.

As a health tracker, however, the Amazfit GTR 3 smartwatch hits the mark. It has more than 150 unique sport modes and its sensors can tell you about everything from your breathing to your blood oxygen level. That means that if you’re in the market for a workout tracker and you’re excited by an option that doesn’t proclaim to everyone that you have a gym accessory strapped to your wrist, the Amazfit GTR 3 could be the best smartwatch for fitness. It meets the needs of professionals looking for wardrobe accessories as they present metrics just as well as it meets the needs of athletes looking to dig into their performance stats.

What is the Amazfit GTR 3 smartwatch?

Released in mid-October 2021, The Amazfit GTR 3 is Huami’s follow-up to the Amazfit GTR 2 smartwatch. The new $179.99 Amazfit GTR 3 offers many of the same health-tracking features as its predecessor while boosting the total possible battery life by a week (from 14 to 21 days on a single charge). The Amazfit GTR 3 also upgrades the sensor technology for more accurate measurements across sport modes, stress and sleep monitoring, plus a Personal Activity Intelligence (PAI) health assessment that goes beyond just step counting. However, it drops a speaker to let you answer calls.

The Amazfit GTR 3 smartwatch has a round face with a minimalist look that doesn’t scream smartwatch. It even features a rotatable navigation crown on the top right—in addition to a second menu button—that looks very much like the wind tool on an analog watch. When the 1.39-inch HD AMOLED display isn’t activated, all you see is a sleek black face with analog clock marks etched on the bezel. You can keep the minimalist look by choosing an analog watch face from one of more than 100 options available via the Zepp app, though I prefer a digital face that tells me my daily step count. The fingerprint-proof tempered-glass touchscreen doesn’t quite live up to its smudge-resistant billing, but the 454×454 resolution screen offers 1,000 nits of brightness and is nice and clear, displaying vivid colors and easy-to-read text.

The Amazfit smartwatch comes in Thunder Black and Moonlight Gray and the body is made from a durable aluminum alloy. The smartwatch is also rated at ATM 5, meaning it can survive swims and even dives up to 50 meters. At 32 grams, it’s lighter than other fitness trackers like the 38-gram Fitbit Versa 2. Plus, the 22mm-wide silicone strap offers 14 sizing holes, allowing a comfortable fit that didn’t bother my wrist, even when wearing the health tracker and sleep tracker for more than two weeks without taking it off for anything but a quick shower (I opted to take it off then because when I tested the nicely equipped budget Amazfit Bip U Pro the band severely chapped my skin).

The health and movement sensors are on the backside, with GPS tracking built in. The health tracker can measure heart rate and SpO2 blood oxygen levels, an acceleration sensor measures your movement, a gyroscope reads the tilt of the watch, and a geomagnetic sensor helps point you in the right direction. There is also an ambient light sensor.

Setting up the Amazfit GTR 3

A stress-free setup process has you using the Amazfit GTR 3 smartwatch to track daily activity soon after opening the box. You can use a QR code to download the Zepp app or search for it in an app store. Once you’ve downloaded the app, use your phone’s Bluetooth connectivity to sync it to the smartwatch (the process takes a few minutes). The Amazfit GTR 3 features a Bluetooth 5.1 BLE connection and the Zepp operating system is compatible with Android 7 and above or iOS 12 and above.

I had previously downloaded the Zepp app when testing the Amazfit Bip U Pro, so I’d already input my fitness goals, health data, and alert settings (opting to receive call, text, and news update notifications on my watch). But I’d say from memory that the entire setup process, including selecting your preferences, takes about 15 minutes. One frustrating feature of the Bip U Pro that still hasn’t been resolved with the Amazfit GTR 3 is that the app and the smartwatch seem to regularly disconnect. That means if you don’t open the Zepp app every few days, your watch may stop displaying information like incoming calls.

To be sure, opening the Zepp app reminds you of all the powerful tracking that the watch is providing—from detailed sleep reports to records of past workouts. Still, I’d prefer to not have to open the app constantly to maintain the connection.

Features of the Amazfit GTR 3 smartwatch

While there are some business-minded features like Alexa connectivity and to-do-list management, the Amazfit GTR 3 smartwatch really came across to me as fitness first. Here are my takeaways:

No matter your sport, this Amazfit smartwatch can track it. I used it on my bike, on the rowing machine, on the elliptical, on rollerblades, and while lifting weights. In the rowing mode, for instance, the smartwatch will track the number of strokes, the number of strokes per set, workout duration, and heart rate. If you use it to hike, it’ll track your elevation and distance.

Sport options, which you can access by pressing the lower side button, range from skiing and snowboarding to stair climbing and spinning to square dancing and skateboarding. You can pause workouts or select interval rest times and, when you’re finished, the watch estimates how long you should let your body recover before exercising again.

The Amazfit GTR 3 smartwatch also impresses as a health tracker, offering data like blood oxygen and stress levels in addition to 24/7 heart rate monitoring. This data comes from the BioTracker PPG 3.0 Biometric Sensor that monitors it all. You can choose one-tap measuring to get an instant look at your health—hold still for 60 seconds and you’ll be given everything from your stress level to your heart rate to your blood oxygen levels all in one shot. The watch will also alert you when you’re too stressed or when you need to stand up. It’ll even tell you to take a break when necessary, which I found to be a nice contrast to the “Get up and move” memos.

All of this data, combined with your activity levels, contributes to a Personal Activity Intelligence (PAI) indicator that provides a complete and customized picture of your health. The PAI score is individualized based on your athletic ability and physical data, so not everyone needs to do the same amount of activity to reach 100 PAI. It also adjusts to your improved health, relying only on the previous seven days of data to set the activity level required to reach a maximum score. That means that as your heart rate and daily activity intensity improve, it becomes harder to get to 100. The research behind PAI, based on 25 years of data, claims that reaching a score of 100 each day can decrease your risk of cardiovascular disease by 25 percent and increase life expectancy by an average of 5 years.

Awakening to the realities

After each night, the Amazfit GTR 3 sleep tracker delivers a detailed sleep report that includes a color-coded chart marking when you were in light sleep (blue), deep sleep (purple), and REM sleep (green). Yellow marks moments of wake-up. The report breaks these down into percentages, comparing them to average numbers; for instance, my 20 percent of deep sleep last night falls into the 20- to 60-percent reference value, but my 71 percent of light sleep is over the 55-percent reference value. That’s not surprising, considering we have a 6-month-old who still stirs at night. The watch also tracks how long you’re asleep and gives you a sleep score. Some of this information is available on the watch each morning but the detailed charts come via the app. It’s hard to judge the accuracy of the time spent in deep sleep versus light sleep, but I’d say the amount of time asleep was fairly accurate, although the health tracker tends to count time spent falling asleep as actual unconscious hours.

Although the Amazfit GTR 3 smartwatch would need more features like a camera and call capabilities to be considered a fully equipped smartwatch, it’s not without some of the better capabilities. For starters, it features Alexa onboard—though, truth be told, it’s probably just easier to use your phone to access the virtual assistant since her voice responses will come from your phone’s speaker. You can also use the smartwatch to operate your phone’s camera. In addition, the watch can control your music, give you the weather forecast, and let you manage your calendar, on top of telling you who’s calling or buzzing you with text messages and other app notifications.

The Amazfit GTR 3 smartwatch’s 450mAh battery fuels some truly impressive run times—the watch can last up to 21 days on a single charge, though that’s with minimal usage. If you’re regularly using the smartwatch to switch music tracks, measure your blood oxygen, and talk to Alexa, the battery will last closer to 10 days. Still, that’s a solid total. I found myself feeling like I needed to connect to the magnetic pogo pin charger every few days only to do so and see that I still had more than 80 percent of the battery life (my favorite watch face doesn’t include the battery level). Once connected to the charger, the depleted smartwatch can get back to full power in a couple of hours.

So, who should buy the Amazfit GTR 3 smartwatch?

Anyone who is in the market for a stylish health tracker should consider the Amazfit GTR 3 smartwatch. From sleep tracking to step totals to stress levels, the watch’s sensors provide accurate readings and detailed reports. Plus, it has the ability to track more than 150 different sports and/or exercises.

If you’re looking for a fitness tracker with a sportier look, you may be happier with something like the Fitbit Versa 3. For a budget fitness smartwatch, Amazfit’s own $70 Amazfit Bip U Pro is a solid option, offering many of the same health tracking as the Amazfit GTR 3, just with an older generation of sensor technology. And if you are looking for an accessory that truly has all the features you’d expect from a device that bills itself as a smartwatch, the Apple Watch Series 7 is still your best bet—provided you don’t mind the nearly $400 bill.

But, at the end of the day, if you want one of the best fitness trackers with a look that’s stylish enough for the office and technology that can deliver detailed data about all your exercise, the Amazfit GTR 3 has a lot working for it and working for you.