Form meets function in this curvy smart speaker that thinks outside of the (boring black) box. 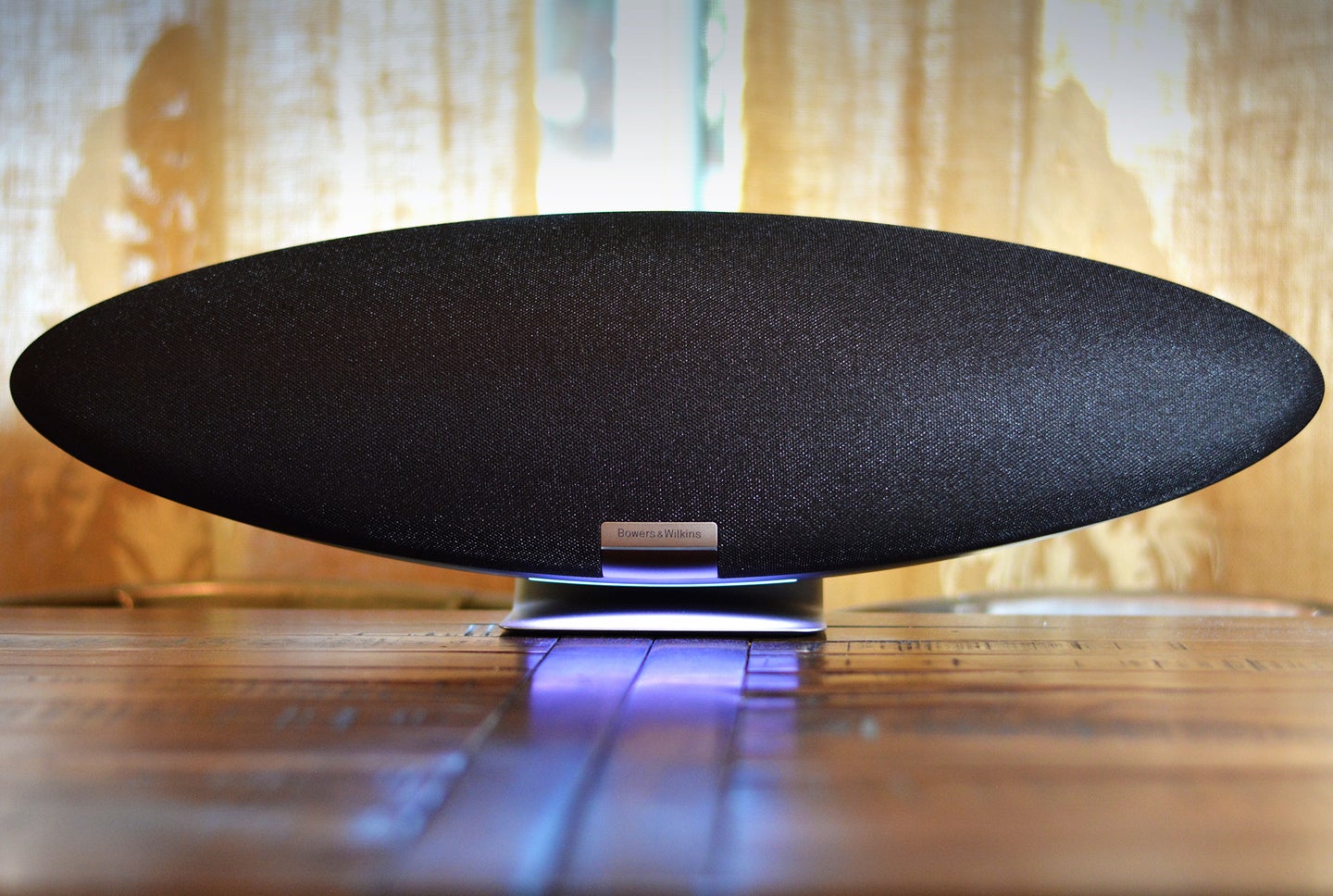 When Bowers & Wilkins introduced its Zeppelin in 2007, it set a new bar for visually arresting, audiophile-grade personal speakers. Over the past 15 years, versions of this compact standout have advanced with new technologies and features, evolving from the original iPod dock to a fully loaded wireless smart speaker. The newest Zeppelin, introduced in fall 2021, brings advanced streaming functions and the Amazon Alexa assistant into the Bowers & Wilkins speaker’s feature set.

The 4th-generation Zeppelin, like most smart speakers, is all about minimalist design and ease of use. But unlike most smart speakers, this imposing airship is meant to take center stage in any space. A 14-pound ellipse that seemingly floats atop its curved metal pedestal, Zeppelin packs five drivers and 240 watts of amplification into an elliptical enclosure measuring more than 2-feet wide, its grille sheathed in luxe mesh fabric. (Choose from deep, black-ish “midnight grey” or light “pearl grey” finishes.)

A hidden LED light radiating down from Zeppelin’s base creates a ghostly halo effect, reinforcing the illusion that the speaker is levitating above its stand. This downward-facing light indicates status and functions and lets you know when Alexa is thinking; it can be dimmed or completely turned off, but I liked the subtle glow.

The speaker’s backside is finished in smooth, matte plastic, which is featureless save for embossed icons running along the top that indicate volume and playback controls, an Alexa voice control/mic mute button, and a multifunction/pairing button that displays a range of colors indicating tasks. The buttons are easy to find by touch, which is helpful since Zeppelin doesn’t have a remote, but I found myself tipping the speaker forward to locate the right controls. People who aren’t into frequent bicep curls will find it more convenient to control the speaker through its companion app.

On the lower back, a recessed panel houses a power plug, reset button, and USB-C port (for service only). There’s no HDMI connection, which might disappoint anyone hoping the speaker can multitask as a soundbar, and put that 3.5mm cable back in the drawer because Zeppelin has no audio I/Os—but with a speaker like this, that’s sort of the point.

Getting started with the Bowers & Wilkins Zeppelin

Zeppelin is designed for simple use; once you get past the initial setup, you won’t have to fuss with it again. Its minimalist approach extends to packaging, which is reminiscent of Apple products: the box included a quick guide and power cord and that’s about it.

The heaviest lift during setup may literally be physically placing the speaker. Due to its irregular shape, the Zeppelin isn’t the greatest choice if you’re looking for the best bookshelf speakers to nestle amongst other personal audio gear and physical media. But, let’s face it: Zeppelin is meant to be shown off. It works well sitting atop a flat surface such as a console, or on a pedestal that can serve as a centerpiece—and conversation piece—in your space. If you really want to get creative, or you’re out of furniture space, a discreet wall bracket is available for $100. For the time Zeppelin was in my (very small) home, it took up residence on my bar cabinet, which sits against a wall in a space that’s open on all sides.

Let the app be your guide

Most of Zeppelin’s advanced controls are in the B&W Music app, which is available for both iOS and Android devices. The app, which serves as a hub for setup and streaming, takes you through setup, including configuring your network, naming your speaker, and linking your subscribed music services. Once plugged in, the Zeppelin becomes discoverable in the B&W app, so keep your device within range of the speaker as you add the product.

When I first booted up the speaker, however, nothing happened. A mysterious red indicator light appeared on the front; I figured this was a sign that something was amiss, but couldn’t find answers in the less-is-more literature that came in the box. A quick chat with B&W led me to a firmware upgrade, which was a completely friction-free process in the app. A simple reset and I was back in business, navigating prompts to add Zeppelin to my network. A long press of the multifunction button also puts the speaker into direct pairing mode, selectable in your device’s Bluetooth settings, and it will remember up to eight devices that can stream to it without sharing the Wi-Fi.

The B&W Music app provides built-in (subscriber) access to a range of streaming services including Deezer, Qobuz, TIDAL, Soundcloud, Amazon Music, and Last.fm (Spotify Hi-Fi will be supported when the service launches in 2022). Once you connect, you can access music playlists, podcasts, radio stations, and recently played tracks without ever leaving the app. B&W also offers curated playlists and suggestions; the app learns your preferences based on your music “likes,” applying them across all of your streaming services and improving accuracy over time.

The app is clean, simple, and very easy to use. You won’t find much in the way of EQ/tone sculpting/correcting beyond basic Bass and Treble faders, but the speaker’s tuning is so finessed, you won’t need these unless you have to compensate for room issues. I never had to adjust the EQ during my tests.

The Bowers & Wilkins Zeppelin can also stream via Apple AirPlay 2, Bluetooth 5.0 (including the SBC, AAC, and aptX Adaptive codecs), and Spotify Connect, which streams Spotify tracks directly from the cloud via Wi-Fi versus your phone. Compatibility with B&W’s Formation multiroom setup is promised in 2022.

The app currently streams at 24-bit/96 kHz resolution, but since the speaker’s converters are capable of accepting 192 kHz files, you can feed it higher-resolution audio by streaming that content over AirPlay 2 or aptX Adaptive Bluetooth, as I did. (A CD, for comparison, is only capable of 16-bit/44.1 resolution, meaning some streaming services do a better job of presenting select music in original studio-grade fidelity, which isn’t impacted by physical media format limitations.)

Getting to know Alexa

Amazon Alexa assistance is set up through the app, where you can link to an existing account. Alexa voice control lets you stream music, control the speaker and music playback, and access typical Alexa skills and functions.

Voice control works exactly the way it does on any Alexa smart speaker: press the Alexa button to summon the assistant or speak commands beginning with “Alexa.” Like most smart speakers, Zeppelin lets you mute its field microphones if you’re (rightfully) concerned about Big Tech listening to you, just press and hold the Voice Service button.

With an audiophile brand like B&W, fidelity is paramount. To achieve true stereo sound from a single speaker, and establish it as one of the best-sounding Bluetooth speakers, Zeppelin features a carefully oriented five-driver complement that borrows acoustic technologies from other B&W speakers.

Zeppelin’s broad elliptical design isn’t just about aesthetics. Because its tweeters are positioned at its tapered outer contours, you’ll experience as much stereo separation as possible from a single speaker. B&W says the tweeters’ placement also isolates them from vibration caused by the larger drivers in the enclosure.

Together, the drivers deliver a frequency range of 35 Hz to 24 kHz. Everything is powered by five channels of Class D amplification totaling 240 watts.

My first impression of the Zeppelin was that this speaker delivers an incredibly powerful, dynamic sonic presentation at any volume level, with a cohesive sonic signature that’s especially favorable to vocals and other midrange sounds.

I streamed high-res TIDAL Master Quality Authenticated tracks directly, circumventing the app’s current limitations. (Think of MQA as the musical equivalent of a ZIP file, a way to encode and distribute full-spectrum audio in a compressed container that unfolds in the listener’s device—a process TIDAL calls “musical origami.”) Listening to Diana Krall’s “The Look of Love,” recorded with a blockbuster jazz combo and the London Symphony Orchestra, Zeppelin revealed every nuance of Krall’s luxurious silk-and-sandpaper vocal stylings in a very direct, lifelike presentation. I was struck by Zeppelin’s tight, defined low-end response; piano notes were defined across the entire register and I could easily pick out, practically feel, Christian McBride deftly pulling his fingers across the bass strings.

When it comes to stereo imaging, no single speaker will ever offer the separation of a discrete pair and it would be unfair to compare the experiences. But Zeppelin does an admiral job at producing a broad, defined soundstage, with distinct separation at close range. While the lush string arrangements may not have felt as wide as they would on a pair of speakers, directional cues are audibly reproduced and the soundstage was expansive for a single enclosure, most defined inside a distance of 3 to 4 feet. Transients are sharp, and attack and decay are handled with aplomb, it’s just more tightly focused unless you’re at a closer proximity.

That said, not many people are spending their days sitting in front of their smart speakers musing on how Zeppelin offers far more imaging than the average all-in-one. Luckily, Zeppelin is equally satisfying for those seeking room-filling, body-rocking sound to energize their abode. Going full-bore with Rage Against the Machine’s “Bulls On Parade,” the speaker delivered every gut punch with authority and clarity and exhibited linearity at any volume. Here, I detected ever-so-slight compression when I pushed Zeppelin to the max, but the speaker never distorted, delivering clean, clear sound even at levels loud enough for my neighbors to stop by and ask me what the heck was going on.

No matter what I listened to, I found Zeppelin’s tonal balance to be pleasing and natural, with muscular yet controlled bass; a warm, detailed midrange; and crisp highs. And given Zeppelin’s single-speaker design, the soundstage remained relatively consistent as I moved around the room.

So, who should buy the Bowers & Wilkins Zeppelin?

At $800, Zeppelin is a pretty expensive wireless speaker. But it’s also the best smart speaker I’ve heard. It’s gorgeous, it’s easy to use, and it’s optimized for modern streaming and high-resolution audio. Deciding whether Zeppelin is right for you starts with knowing what you want out of your sound system. Ultimately, any Alexa speaker will turn on the lights and order groceries. But if superior sound and showstopping style are your top priorities, the Bowers & Wilkins Zeppelin is the network-connected speaker to beat.

Sarah Jones is a Bay Area-based writer and musician who has been chronicling the creative and technical forces driving the music industry for 25 years. She's served as Editor-in-Chief of Mix, EQ, and Electronic Musician magazines and was the live sound editor at Live Design magazine; her articles have also appeared in Gearspace, Keyboard, and Berklee Today, as well as on grammy.com.