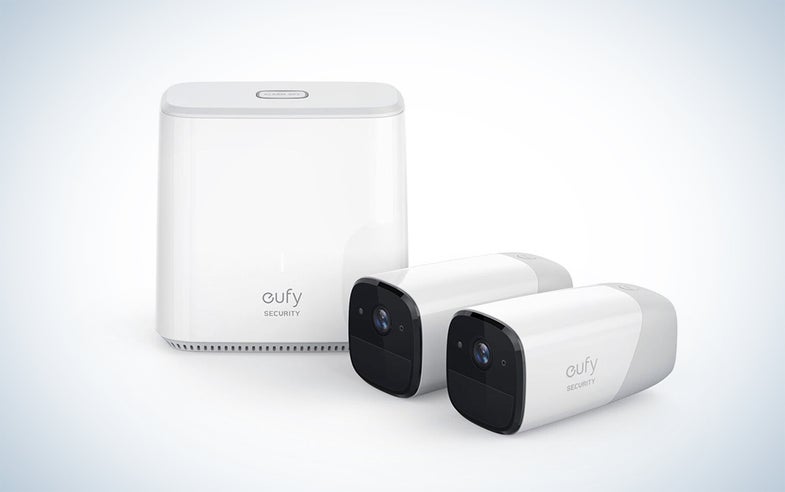 We don’t typically post about Kickstarter campaigns, but Eufy—like their parent company Anker—makes excellent products that are more reliable and interesting than the average crowdfunding effort. Eufy is Anker’s smart home brand, and they just launched their campaign for a wire-free security cam—the EverCam.

The EverCam’s late entry into this market segment allows it to address several common issues that other security cameras face. This includes annoyances like short battery life, tricky installation, and an unending stream of tedious false notifications every time your pet barks at the mail carrier.

Eufy’s 1080p HD EverCam cameras connect to a Security HomeBase hub with encrypted, local storage. After connecting the hub to your wireless router, the HomeBase stays in constant communication with up to 16 cameras over a low-frequency wireless signal. The base automatically switches to WiFi once it starts recording, and stores the footage on a microSD (it comes with a 16GB card). Most current security systems store your footage on cloud servers, which are typically convenient, but costly. If you prefer remote storage, the EverCam gives you the option for $3 a month, per camera to stash your video in the cloud.

The wire-free camera attaches to a wall by screw mount that works on just about any flat surface. If you have a metal surface available, you can use the magnetic mount which doesn’t require drilling. Between these two options, you can place the security camera pretty much anywhere you can reach. The camera also has a wide 140-degree angle lens—with a 8x digital pan and zoom—so you can view more of your room or property.

The EverCam is weather-proof—IP66 rated, meaning it protects against high water pressure and keeps out dust—has night vision allowing you to see up to 33-feet away, and allows you to live stream the footage from your phone through the smartphone app. It also has a built-in microphone and speaker will allow you to see and talk to any visitors—welcome or otherwise— from your smartphone.

One of the marquis features is the camera’s battery life. The EverCam has an impressive 13400mAh that will last a year when actively monitoring and up to three years in standby mode. When your camera needs recharging, it uses Qualcomm QuickCharge 3.0 to fully regenerate the camera battery in about three hours. The base station also has a built-in 5000mAh battery that will keep a seven-day charge. This means it will continue to record even if there is a power outage

Eufy claims that their security system will send 95 percent fewer false alarms to your phone than other security cameras on the market. It does this by using a three-step detection process. It first uses motion and heat sensors to detect movement of objects that give off heat (a falling picture frame won’t trigger the system). The second phase uses AI to detect the shape of a figure on the camera. It makes a distinction between the shape of an animal and a human body so your four-legged friends won’t set off the alarm. Finally, it uses facial recognition to determine whether or not the person on camera has a “trusted face” that you’ve previously OK’d in your preferences.

As an added security measure to prevent theft, the base station has a 3W speaker built that produces a 100-decibel anti-theft alarm. The alarm will sound if the camera is removed from the mount or if it believes a break-in is occurring. With the release of the EverCam, Eufy is also debuting entry sensors as a secondary piece of hardware that will communicate with the ecosystem and alert you if a door or window is left open while you sleep or are out.

The EverCam is already way past the intended fundraising goal—obviously others have faith in their products too. There are still have some rewards left if you want to take part in the campaign. Check it out here. The EverCam is estimated to be delivered by September of this year. If you support the project now, you can get a $329 setup for just $219.