Apple Watch comparison: Which one is right for you?

When you’re choosing an Apple Watch, comparison shopping is your friend to get the style and generation that’s right for you. 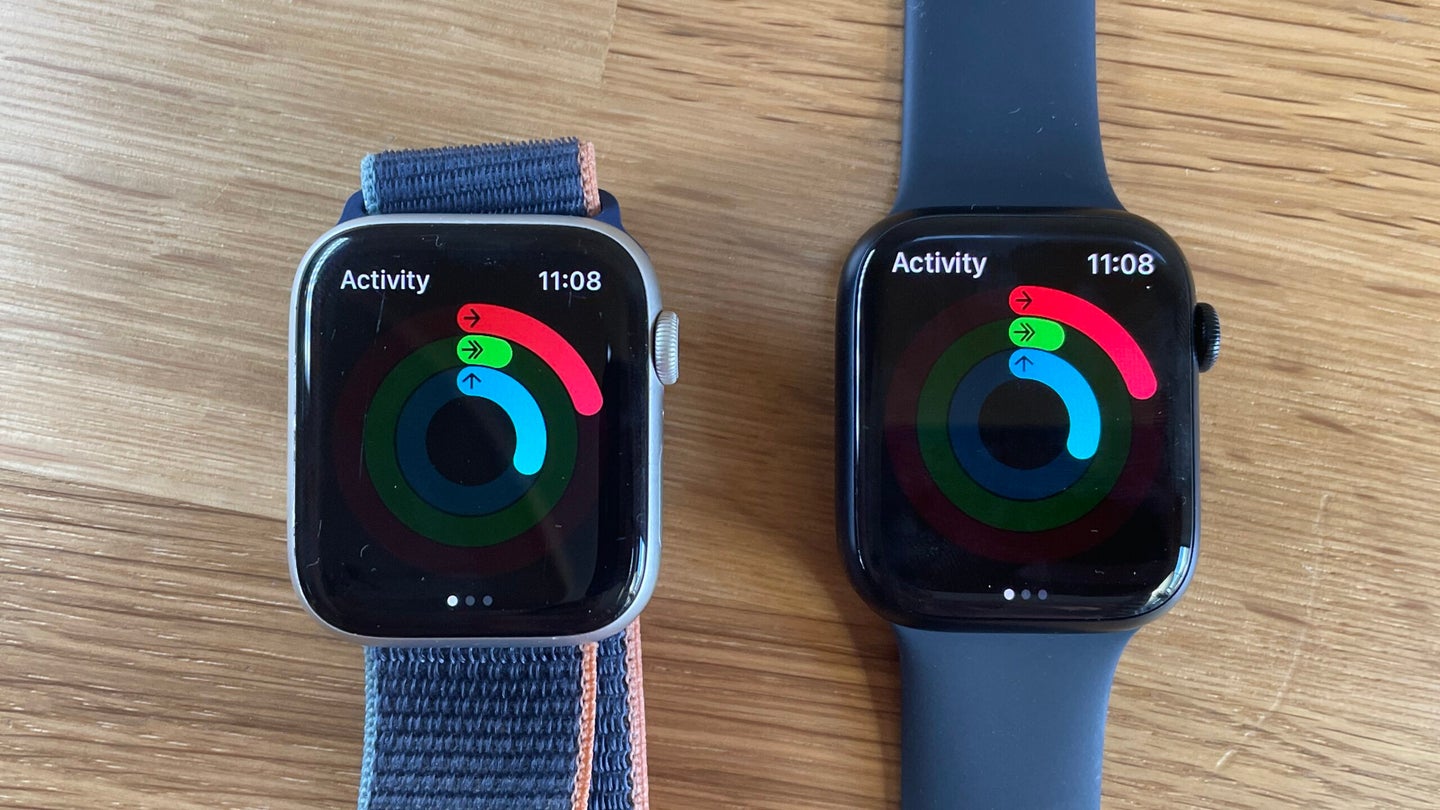 The Apple Watch Series 6 (left) and Series 7 (right) screens side by side. Mike Epstein
SHARE

Apple makes the most popular smartwatch in the world, and it’s not particularly close. In fact, some estimates claim that the company sold more than 30 million Apple Watches in 2019. That’s 50-percent more than the entirety of the Swiss watchmaking industry, which includes heavy-hitters like Tag Heuer and Swatch. Of course, the Apple Watch does much more than simply tell time. It’s a fitness tracker, a step tracker, and—in the newest Apple Watch Series 7—a sleep tracker. And that’s before you dive into the app store.

While it’s tempting to simply splurge on the latest with all the extras, it’s not quite that simple. Before you fire up your Apple Pay to shell out for an Apple Watch, comparison shopping will ensure you get the features you want. It may even save you a little bit of cash.

There are currently three models in the Apple Watch lineup: Apple Watch 3, Apple Watch SE, and Apple Watch 7. It’s easy to assume that basically represents a “good, better, best,” lineup, but it’s not quite that simple. The following is a quick overview of each model:

Debuting all the way back in 2017, the Apple Watch Series 3 offers the core Watch functionality like fitness tracking, access to the App Store, and emergency alerts for less than $200 even without additional discounts. It doesn’t, however, boast the same advanced biometric sensors or case options found in its more expensive siblings. It’s only available with an aluminum case, which only comes in the dark Space Gray and Silver hues. The faces are on the smaller side: 38mm and 42mm.

Starting at $279, the Apple Watch SE steps up to larger 40mm and 44mm display options. The SE also only comes in an aluminum case, but it has a Gold color option in addition to the Space Grey and Silver. The SE’s optional cellular connectivity is perhaps the biggest upgrade over the Series 3. It allows wearers to make calls and use data for apps even if the Watch isn’t in range of the iPhone with which it’s paired.

The current flagship in this mental Apple Watch comparison chart includes everything you’ll find in the SE, as well as a few extras. From a hardware standpoint, Apple Watch Series 7 is the only model that includes sensors to monitor a person’s blood oxygen level and take ECG-based heart rate readings. The display, with a trimmed-down bezel that makes it almost 50-percent larger than the SE’s face, is also “always on.” That means you don’t have to wait for information to show up every time you raise your wrist to check the time or your notifications—plus you have more space for watchOS 8 exclusives like a QWERTY keyboard for pecking out messages. And all this happens without a substantial hit to the 18-hour battery life—and it can charge from 0 percent to 80-percent battery in 45 minutes. (For the full rundown of features, check out our in-depth Apple Watch Series 7 thoughts.)

Stepping up to the Series 7 also unlocks a heap of new case materials and designs. You can still opt for the typical aluminum case, but you can choose Blue or Red in addition to the colors offered by the SE. You can also opt for a stainless steel or titanium case. Both those options upgrade the typical glass displays to a super-durable, harder-to-crack sapphire crystal.

It seems curious to see a gap between Apple Watch 3 and Watch 7 on the official Apple Store. Although both discontinued, you can find the Series 4 and Series 5 refurbished online. You can still buy the Apple Watch Series 6 from some retailers. Unfortunately, it will typically cost you just a little less than a current flagship model. At the time of this writing, a refurbished Aluminum Series 6 costs roughly the same as the Series 7. For almost no extra money, the newest Apple Watch is a better deal for the hardware upgrades (like the always-on screen). The Apple Watch Series 7 will also get more support for software updates down the road.

What size watch face should you get?

The Apple Watch SE offers both 40mm and 44mm watch faces. Series 7 features a slightly larger watch face at 41mm and 45mm. Apple Watch Series 3 comes in both 38mm and 42mm options. A difference of 4mm may not sound like much, but you really do feel it once you put it on. The best bet is to actually try on both sizes in a retail store before making a purchase to see which one best fits your wrist. A bigger screen sounds like an upgrade, but you won’t enjoy wearing it if it’s bulky or uncomfortable.

While the Series 7 and SE both offer larger faces, when making the Apple Watch comparison it’s worth noting that the cases are also 11-percent thinner than the Apple Series 3. This helps accommodate the wider faces without feeling too chunky.

Which Apple smartwatch is the best fitness tracker?

Heart rate monitoring represents the most important aspect of fitness tracking, and the Apple Watch 7 has the advantage there. Its third-generation heart rate sensor is a full gen newer than the sensor in the SE. It’s two full versions more advanced than the Apple Watch 3. Apple doesn’t share metrics on exactly how much more accurate tracking is from generation to generation, but in a case like this, newer is better. From a feature standpoint, however, any current model will do a good job keeping tabs on your workouts as well as vital readings like your resting heart rate or heart rate variability.

Apple Watch Series 7 includes an app that tracks your blood oxygen levels, but it’s a first-gen sensor—that means its readings can still be somewhat inconsistent. Beyond that, the data isn’t all that useful unless you have a specific condition that affects this variable.

Are the stainless steel or titanium upgrades worth it?

As mentioned above, Apple Watch 7 offers both stainless steel and titanium case options in addition to the standard aluminum. Both upgrade metals are tougher overall compared to aluminum and do better when resisting dents and scratches. Perhaps more importantly, however, both upgraded cases come with an extra-hard sapphire crystal over the display. Having worn both models extensively, I can say that the sapphire crystal clearly excels when it comes to resisting damage.

That extra durability—and the additional colorways—will cost you, though. The stainless steel case models start at $699, while the titanium version starts at $799. If you plan to keep one Watch for a long time, however, the additional durability may be worth it.

Do you need cellular data on the Apple Watch?

When making your own Apple Watch comparison, whether or not you need cellular data is a major feature difference between models. If you’re buying an Apple Watch Series 3, you won’t have to worry about this choice. Apple doesn’t offer that model with cellular connectivity. For the Apple Watch 7 and SE, however, you’ll have to make the choice. The Watch itself costs more with cellular built-in: it’s a $50 premium for the SE and an extra $100 on the Watch 7. Then you’ll have to factor in the cost of the data itself. Most carriers will charge you about $10 per month extra to add basic data to your Watch. Definitely check with your carrier for compatibility before making a purchase.

That extra expense may be worth it for some people because it allows them to use many Apple Watch features without having to lug around an iPhone. So, if you go running without a phone, you can still make calls and listen to music from streaming services.

So, which Apple Watch should you buy?

If you’re thinking about an Apple Watch 3, know that the hardware is much older than its siblings. That means it likely won’t receive software updates as far into the future. You’ll also miss out on features like newer heart rate monitoring sensors, cellular compatibility, a larger display, and fall detection. Still, if you’re just getting started, the Apple Watch 3 is still a very capable fitness tracker that’s waterproof down to 50 feet, just like its competition. Plus, you can sometimes find Watch 3 for less than $150, especially during the holiday shopping season.

The Apple Watch SE is likely the best Apple Watch model for most people. At $279, it’s more than $100 cheaper than the base model Apple Watch 7 and it offers many of the same features, which gives it an edge in the Apple Watch comparison. You’ll miss out on the always-on display, and the blood oxygen monitoring, which you may not find that useful anyway. Apple Watch 7 is the flagship, and, if you’re planning to keep it for a long time, this is the way to go. Upgrading to a stainless steel or titanium case with a sapphire crystal will provide maximum durability. That also comes with many more style options, which is important for a device that you’ll likely wear pretty much all the time.