Try On A Virtual Apple Watch With This Augmented Reality App

When a paper mockup simply won't do 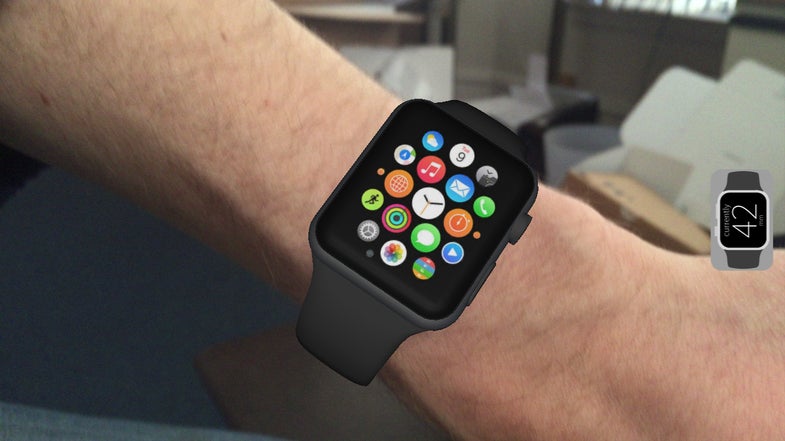 A little over two weeks from now, the Apple Watch will be on display at Apple Stores around the world, and much of the mystery over the product will have evaporated. But for now, if you’re looking to see what Apple’s smartwatch looks like on your own wrist, your only recourse is to turn to technology.

AR Watch, an app from Belgian mobile app developers Underside, lets you use augmented reality to try on various versions of the Apple Watch, using your iPhone’s camera to project them directly onto your own arm. You can compare the 38-mm and 42-mm versions, as well as try on the various colored sport bands.

As a likely (okay, definite) Apple Watch buyer, I couldn’t resist giving the app a whirl, especially since I’ve been torn between the two sizes. To use the app, you’ll need to print out this PDF and cut out the Apple Watch placeholder, then affix it to your wrist; I recommend Scotch tape, especially for the harrier user. Using a QR scanner like QR Reader, scan the QR code on the bottom of that PDF, which will prompt you to install the AR Watch app.

(A word of caution: AR Watch isn’t available from the iTunes Store. If you’re the wary sort who doesn’t want to risk installing apps from untrusted location–which is smart–you may want to resort to the somewhat less advanced option in Apple’s own Apple Store app, which displays the Watch in actual size on your smartphone’s screen.)

Once you’ve launched the app, point your phone’s camera at the paper you’ve attached to your wrist, and voilà: a virtual Apple Watch appears above the placeholder on your screen. You can examine the watch from a variety of angles, and tapping the one icon on the screen lets you toggle between the 38-mm and 42-mm versions; tapping elsewhere lets you change the band colors. If you want to make your friends jealous, simply tap and hold on the screen to take a screenshot.

The app only appears to have the Apple Watch Sport models included, so if you wanted to simulate the lifestyle of the rich and famous and take the $17,000 Apple Watch Edition for a virtual stroll, you’re out of luck. The AR version of the Apple Watch is actually pretty good, though, but of course, you can’t see it in action. However, AR Watch helped reinforce my thought that the 42-mm version of the Watch isn’t as overpoweringly huge as I feared, so even if I can’t make it into an Apple Store on April 10 to see how the smartwatch looks on my wrist for real, I’m still pretty sure of my decision.