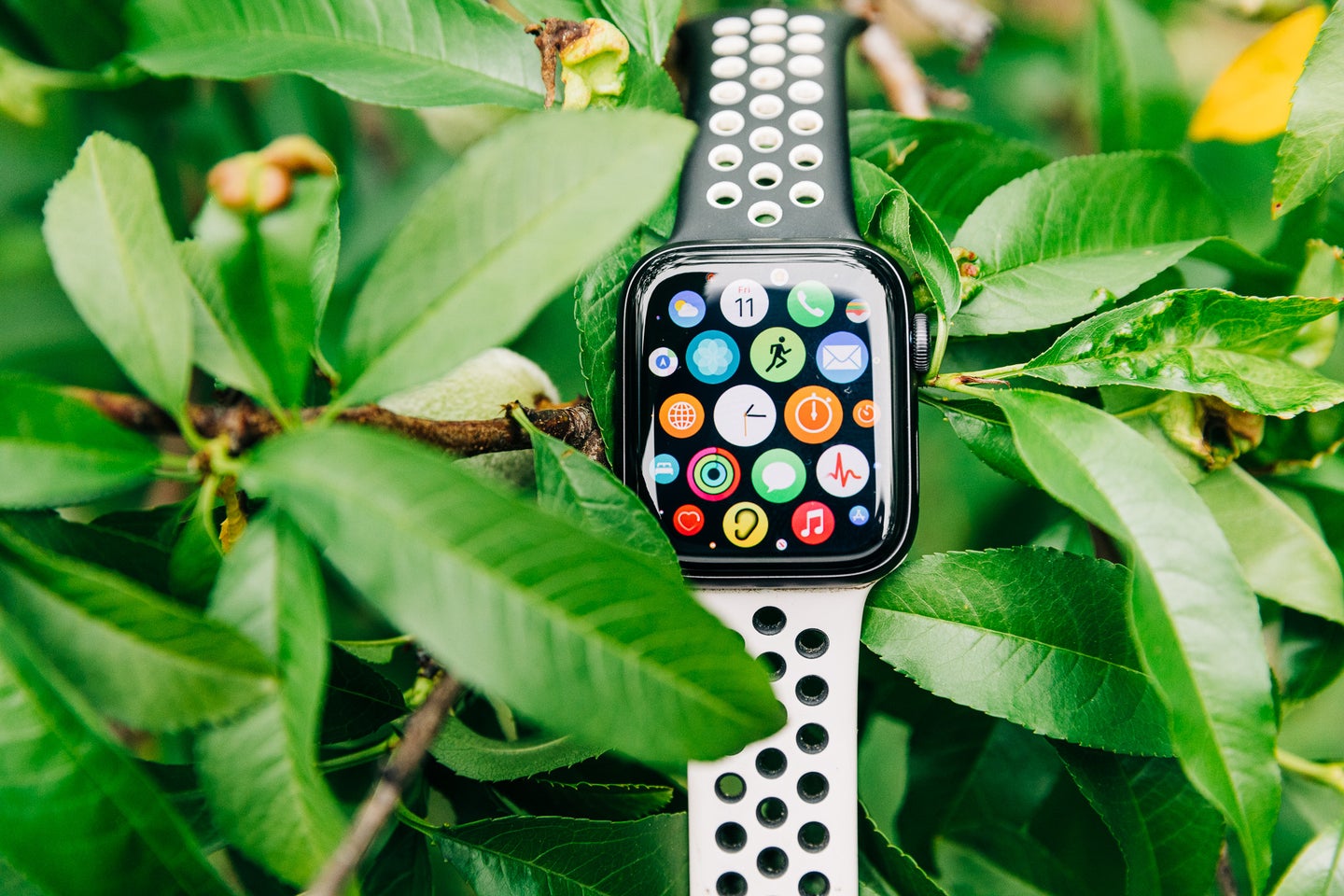 Apple Watch Series 6 is the best smartwatch for iPhone users and, by now, that shouldn’t come as a surprise. The Apple Watch Series 5 before it—and the Series 4 before that—were both great and Series 6 hasn’t changed all that much. And while tech bloggers and industry analysts typically balk at granular generational improvements, Apple’s wrist-worn computer has no need to worry about its status as the world’s most popular watch. The company clearly didn’t think the Apple Watch was broken and had no intention of trying to fix it.

While Apple Watch Series 6 (starting at $399 for an aluminum case and GPS without cellular connectivity) isn’t profoundly different from previous models, it does offer a few notable upgrades and features that give it an edge over its older siblings—as well as its newly arrived little friend, the Apple Watch SE.

Many of the new hardware features found in the Apple Watch 6 feel like they’re laying the groundwork for the future. That’s a common theme with Apple’s flagship products: Consider the LiDAR sensor inside its iPad Pro, which has some limited use for pros now, but will only become more useful over time. Some of the new Apple Watch features have that same vibe. Here’s an overview of the most notable new stuff you’ll find inside.

Flip over the case and you’ll find that the Apple Watch 6 features an entirely new blood oxygen sensor nestled in with the infrared heart monitor. The hardware attempts to read the oxygen saturation in your blood. It emulates the little finger clamp device hospital staff use when taking your vitals. For patients with breathing issues or illnesses, it can be a useful metric. In the Apple Watch’s case, however, it’s only meant as a wellness tool for tracking overall health.

When the sensor is working, it emits bright illumination from its LED array so it can measure the light reflected back to get a reading. You can trigger a reading manually, but the device will also monitor this stat in the background. It’s goal is to observe long-term trends more than up-to-the-minute levels.

The sensor is clever, but finicky. During a manual reading, my results typically made sense, falling around 98 or 99—anything between 95 and 100 is normal. To do it right, however, you have to make sure the Watch is positioned farther up your arm I usually wear it. You also need to stay still for the 15-second reading. Because background sensing doesn’t typically enjoy these idyllic settings, I found them somewhat sporadic. Every once in a while, I’d get a value that would suggest I should be dead. As a gadget writer, I know it’s fine, but as a hypochondriac, it hurt a little.

Apple isn’t the first to employ this kind of sensor in a smartwatch. In fact, most of the other big names in the fitness tracker game—like Samsung, Withings, Garmin, and Fitbit—all offer models with this kind of sensor. Ultimately, though, it’s not a medical device, but rather a wellness feature. It can give you a general idea of your blood oxygen level, but it’s not an FDA-approved product.

Personally, the bright light it emits and the sporadic results are enough to prompt me to turn it off. But, it’s not out of the question that Apple could improve its performance with future models. Even software updates could improve it down the line.

Starting with Apple Watch 5, the wearables’ OLED screens stayed at least somewhat illuminated when you weren’t looking directly at them. That makes it possible to catch a glance at the time or your notifications without making a conspicuous arm gesture. In Apple Watch 6, the always-on display is now 2.5 times brighter in ambient mode. That makes it much easier to see, especially in bright conditions.

Despite the extra screen brightness, the Apple Watch 6 still promises the same 18-hour Apple Watch battery life as its predecessor. I’d guess it has a lot to do with improved performance when it comes to the screen’s variable refresh rate. If the image changes less often, that can make up for the power consumed by the extra brightness. This feature is handy and I hope the next model pushes it even more.

When Apple announced the U1 chip inside the Apple Watch 6, the hardware didn’t actually do very much. It stayed that way for several months. Now, with the impending release of watchOS 8, we’re finally starting to see its potential.

The U1 chip is a short-range wireless chip that can sync to other compatible devices with a super-fast connection that can help hone in on hyper-specific locations. In the upcoming watchOS 8 release, Watch will get its own version of the FindMy app. You’ll be able to use it to track down AirPods, iPhones, or AirTags right from your wrist.

Apple has also promised that its U1-equipped devices will soon work as full-fledged keys for cars and even smart locks. Right now, these functions are super-limited, so they won’t come in handy right away, but at least we have an idea of how Apple intends to use the U1 down the road.

I’ve worn every version of the Apple Watch since the Series 3 debuted in 2017. The Series 6 feels familiar in a mostly good sense. The battery charges faster than any model that came before it, which is always a nice upgrade. It’s not massively zippier, but I’d venture to say 15- to 20-percent faster, which is handy when I forgot to charge it and want to use it as a sleep tracker. Throwing it on the charger for 15 minutes gives me enough juice to get through the night.

By now, some of the features that were notable at launch in fall 2020 have lost a bit of lustre. The new hand-washing tracking feature feels like an ancient relic from a time I’d like to forget. The upgraded processing hardware reportedly adds roughly 20 percent more power, but I never really ran into any bottlenecks in the first place. Navigation and apps in watchOS have always felt snappy, and that hasn’t changed.

If you’re already rocking an Apple Watch Series 5, this likely isn’t a must-buy upgrade for you. Looking back at Apple’s typical schedule, we’ll likely get the next version of Watch (presumably the Apple Watch Series 7) sometime in September of this year, so you don’t have to wait that long for another upgrade.

If you do jump from Series 5 to Series 6, you’ll get faster charging, blood oxygen monitoring, the U1 chip, and an always-on altimeter, which I have never actively used. If you’re a big hiker, though, it might be a welcome upgrade.

As we’re coming out of the pandemic lifestyle, it seems worth talking a little about the Apple Watch Series 6 specifically as a health tracker. It’s actually a top-tier workout tracker. Apple Health still offers a robust set of fitness tracking features and the heart rate monitor has proven fairly accurate over the years. If you want to get in on Apple’s Fitness Plus subscription service, which offers 10 types of interactive video workouts for $10 per month, you still need an Apple Watch to track your movements.

If you’re planning to wear it while clanging barbells or venturing out into rough terrain for trail runs, however, the jump to the Apple Watch Series 6’s stainless steel case with the sapphire crystal cover is a smart move. It will make the entire package more durable when it comes to resisting scratches, cracks, and dents.

Who should buy the Apple Watch Series 6?

It’s easy to say that this is the best Apple Watch. It’s also the best smartwatch for iPhone users and it’s in the conversation for best smartwatch full stop. At $399, it’s not cheap, but the Series 6 feels uniquely equipped for longevity in a smartwatch space, where devices become obsolete quickly. The Series 6 has the U1 chip built-in, which will get a number of new features added via OS updates in the coming years.

Some of the Apple Watch’s main competitors are also in flux at the moment. Samsung and Google recently announced that they were teaming up on a new smartwatch platform that will attempt to blend the best parts of Google’s WearOS with Samsung’s Tizen platform. While that may lead to great Android smartwatches in the near future, it’s left the current landscape messy.

If you want the best Apple Watch, pull the trigger on the Series 6. Price is a consideration for most people, however. If you don’t need the latest and greatest features, the current Apple Watch SE is worth some consideration: It starts at just $279 and offers many of the same practical features (minus the blood oxygen sensor and ECG functionality) you’ll find in the $399+ Series 6. While the Series 3 remains in the current lineup, it’s hard to recommend; even at $199, its age is catching up with it, which makes software updates tricky and compatibility a concern down the road. If you have the cash, you won’t regret buying an Apple Watch Series 6 and hanging onto it until an irresistibly new and shiny model hits the market.