Car crash detection and a way to communicate via satellite in an emergency are part of the latest tech out of Cupertino. 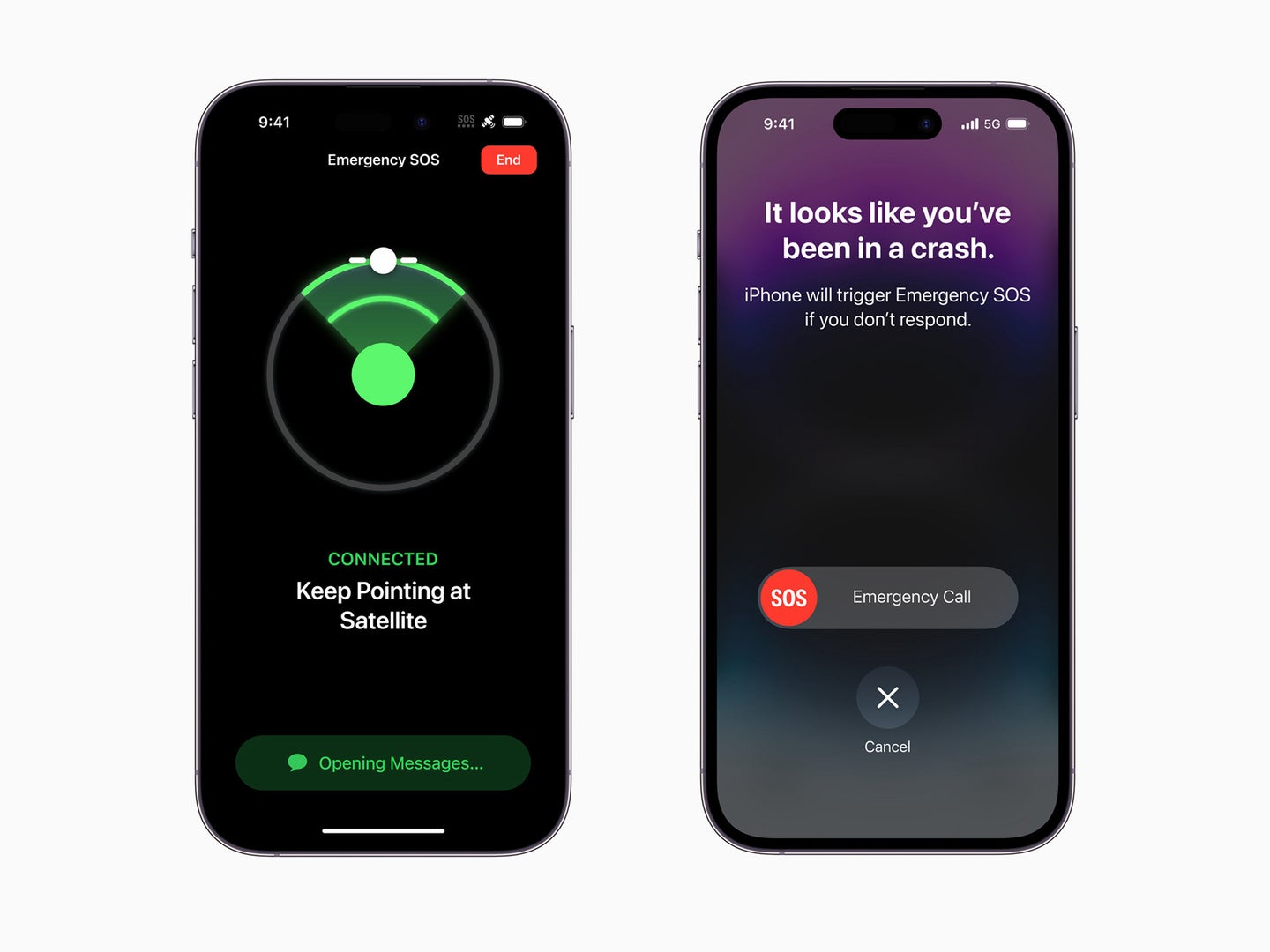 Apple held its annual iPhone extravaganza today, and among the debut of gadgets like the iPhone 14 and the chunky, extreme-sports-focused Apple Watch Ultra are two new services focused on safety. One of them, car crash detection, involves both gadgets, and the other, enabling emergency satellite communication, is iPhone-specific.

Here’s a look at what to expect from the two new services.

Apple has previously rolled out two features tied to its wearable device that detect if you’ve taken a spill: a form of everyday fall-detection (in 2018) and then, last year, a workout-focused version of the same.

A new service, announced today, aims to notice that you’ve been in a car accident and then call for help.

Ron Huang, the company’s vice president for sensing and connectivity, said that the feature employs new sensors in the Apple Watch as well as machine learning. While the company’s watches already have gyroscopes and accelerometers in them, Huang said that new versions of these sensors help detect the forces present in a car accident. That new accelerometer, he said, can notice as much as 256 Gs of acceleration, “allowing it to detect the extreme impacts of a crash.”

For context, one G—that stands for gravity—is what you feel pulling you straight down towards the Earth at any given moment, and fighter pilots endure as much as nine or more Gs while conducting maneuvers in which they bank hard or accelerate quickly. In a car accident, the Gs the watch are detecting likely stem from forces involved in actions like the rapid stop.

Huang also said that the onboard barometer, microphone, and GPS chip help with the detection process as well, and that machine learning helped tie everything together. The barometer is involved to measure pressure-related changes due to an airbag’s deployment, a promotional video during the event explained.

The company’s latest phones also offer an identical service, said Kaiann Drance, the company’s vice president for iPhone product marketing, meaning that you do not need to buy the newest watch to get car crash detection.

The announcement comes at a grim time for road safety in the United States, as almost 43,000 people died in car accidents in 2021, an increase of more than 10 percent over the year before. (Pedestrians are an especially vulnerable group.) But of course, difficult problems like national road safety are unlikely to be solved with something like a gadget.

The second safety feature the company announced is baked into the new iPhones specifically, and involves giving someone like an injured mountaineer a way to ask for help via satellite when they are out of cell service range.

Apple is calling the new feature “Emergency SOS via Satellite,” and it works by instructing the lost hiker to point their phone at a far away, quick-moving communications satellite. To make this feature work, engineers had to tackle the bandwidth challenges that come with this form of communication.

“To connect to these satellites, you need to be outside, with a clear view of the sky,” said Ashley Williams, the company’s manager for satellite modeling and simulation. “And the bandwidth is so limited that even sending a text message is a technical challenge.” (So, no Netflix via sat.)

Other factors that allow this whole system to work are a “custom short text compression algorithm,” Williams said, as well as a specific screen interface for reporting what the problem is, like by hitting the “Lost or Trapped” option. Helping to handle any cries for help will be a ground network that also includes “relay centers staffed with highly trained emergency specialists ready to get your text and call an emergency service provider on your behalf,” she said, which are involved if the emergency center cannot deal with a text message exchange on its own.

The satellite communication service will not come with any extra cost—for the first two years after you purchase an iPhone 14. After that, the sky’s the limit. The SOS service debuts in November, only in Canada and the United States.

Watch the entire event, below.