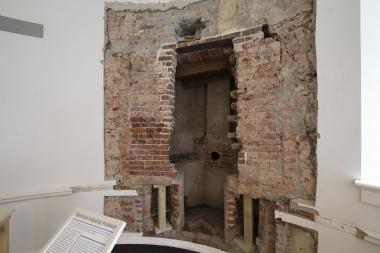 If these walls could talk, they might have something to say about science.

During a recent renovation of the Rotunda, one of the oldest buildings at the University of Virginia, archeologists came across a piece of the University’s early history, a chemical lab constructed in the early 1800’s.

The brick alcove has been boarded up since at least the 1840’s, but in its heyday, students used the primitive workbench to carry out many chemical experiments. There were only five workspaces, but, like modern chemical labs, there were also heat sources (one with a wood fire and one with a coal fire) as well as ventilation to carry away fumes.

“This may be the oldest intact example of early chemical education in this country,” Brian Hogg, one of the university’s historic preservation planners said in a statement.

The lab was probably built for John Emmet, the first professor of natural history at the University, appointed by Thomas Jefferson. Though Emmet was not Jefferson’s first choice for the job, he ended up being an incredible asset, teaching not only chemistry, but also some medicine, zoology, mineralogy, geology, and, at the request of Jefferson himself established botanic gardens at the University.

Chemistry, though, was the subject that really seemed to light Emmets fire. In the 1830’s he published numerous papers, covering a range of chemical topics, including “Iodide of Potassium as a Test for Arsenic” and “An Inquiry Into the Probable Cause of Electro-Magnetic Currents”. In addition to doing research, he was also a great teacher, with a reputation for explaining complex concepts simply and clearly, and also for wanting students to perform experiments on their own instead of just watching him go through the motions. The early lab that was just uncovered was probably used by Emmet’s students during his time there.

The building will re-open when renovations are complete in 2016, and the University hopes to preserve the chemical hearth for posterity.