Rising sea levels are going to mess with the internet, sooner than you think

Connectivity issues could get much worse. 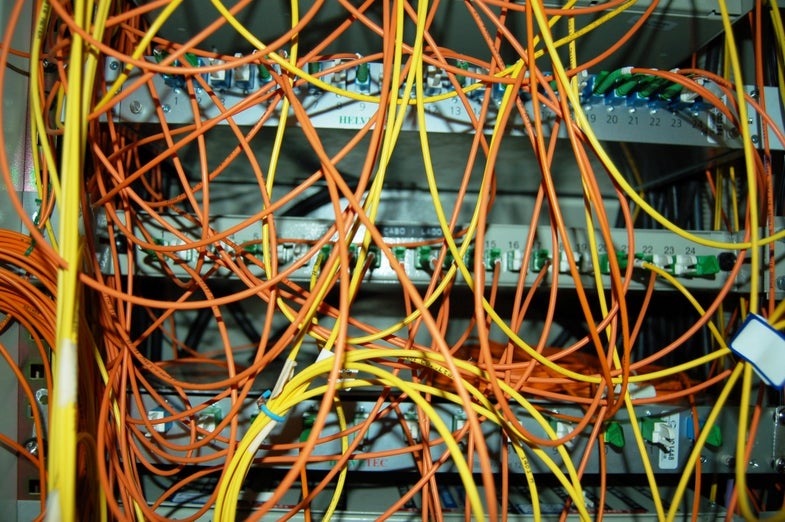 Snaking beneath roads and strung across oceans, hundreds of thousands of miles of cables and their connections make up the backbone of the internet. Despite its magnitude, this network is increasingly vulnerable to sea levels inching their way higher, according to research presented at an academic conference in Montreal this week. The findings estimate that within 15 years, thousands of miles of what should be land-bound cables in the United States will be submerged underwater.

“Most of the climate change-related impacts are going to happen very soon,” says Paul Barford, a computer scientist at the University of Wisconsin and lead author of the paper.

The immediacy of the threat stems from an unfortunate coinciding of location—much of the infrastructure that supports the internet just so happens to be situated in places most prone to rising waters. Internet traffic from our devices pings through fiber optic cables bound up in tubes that lie in shallow trenches underground. Although these cables are designed to be weather-resistant, they were never meant to be waterproof, Barford says. He predicts over 4000 miles of these cables running along the coast will flood within 15 years.

What’s more, the parts of the system that are designed to be waterproof are also vulnerable. While pipes carrying streams of information along the ocean floor can withstand the stresses of the sea, these are very different than the cables buried on land. Ocean-faring tubing is endowed with “armor,” metal cabling and protective coating to keep water from its fiber-optic contents. “Of course the irony there,” Barford says, “is that those transoceanic cables have to come up above water at some point.” These landing points don’t have the same protections, and they happen to be right next to the ocean. Barford’s research shows that more than one thousand locations where cables meet—like the spots where the submarine tubes hit land—will be surrounded by water in less than two decades.

A perpetual pool of salt water could take its toll on infrastructure. Connections may corrode and water molecules could wedge their way into microscopic cracks in fiber-optic lines. A barrage from storms and floods could damage buried cabling, all leading to signal loss. Most of this infrastructure was deployed decades ago, writes Barford, so seals and cladding protecting wires are also more likely to be vulnerable to damage.

To see where the physical backings of the internet are most vulnerable, Barford compared a map of internet infrastructure that he helped develop, with data from the National Oceanic and Atmospheric Administration’s Digital Coast project, projecting worst-case scenarios for sea level rise in the United States over the next hundred years. The overlay showed that Miami, New York, and Seattle were particularly at risk from rising waters.

“When I actually saw the results, I was kind of horrified,” says Ramakrishnan Durairajan, a computer scientist at the University of Oregon who collaborated on the project. “All of these locations are where my friends and family live.”

Durairajan emphasizes the analysis is a conservative estimate because it only takes into account predicted coastal flooding from sea-level rise, not any threats posed by future storms. Even with minimal sea level rise, we’ve already experienced incredible damage to communication infrastructure from major storms like Sandy and Katrina, Barford says.

The extent of our communication system at risk, and the sheer amount of physical stuff supporting the internet, is difficult to fathom. “It is the largest and most complex infrastructure that humans have ever built,” says Barford, “so it’s kind of hard to understand.”

And, as Barford points out, all that complexity was built without considering the effects of climate change. To keep this modern marvel going, experts will have to think up some more resilient solutions—and they need to do it soon. “This is not something that we can take our time with,” Barford says.