What will Antarctica look like in 2070? These researchers want to show us.

The Ice Sheet has lost 3 trillion tons in 25 years. 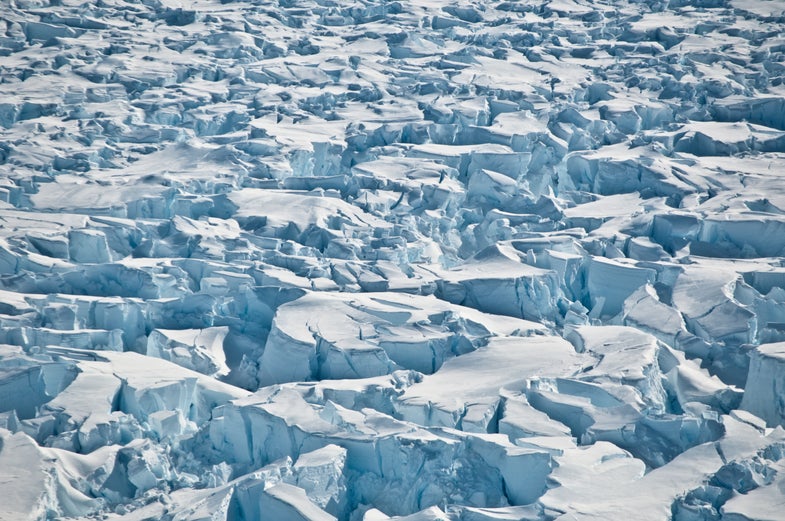 Anthropogenic climate change is causing innumerable changes to our planet. It can be disorienting, as every day brings news of a new extinction or climate change-related threat, and if you’re not a scientist it can be hard to know what to do about it. An interdisciplinary group of researchers has teamed up to try to change that—by helping people picture the future of Antarctica.

Their new paper, published today in Nature, compares two possible futures for Antarctica. In one, the continent is radically different and anthropogenic climate change is having massive, poorly-controlled impacts. In the other, climate change and overpopulation are still factors, but Antarctica itself is in much better shape, with positive consequences for the world. It relies on a combination of existing science and projections and the peer-reviewed expert knowledge of its authors, who are respected Antarctica scholars in disciplines ranging from environmental science to glaciology.

Currently, Antarctica is one of the most remote and tightly-regulated places on Earth, and has been since the late 1950s, when The Antarctic Treaty was signed. There’s a moratorium on natural resources exploration there, and while there is fishing in the Southern Ocean, it is regulated by a commission that meets annually to check on conservation goals. Tourism is also tightly controlled, as is scientific research.

All this regulation is important because, the study authors write, Antarctica and the waters that surround it have a “profound influence” on things like sea level, the Earth’s climate, and ocean ecosystems. “Change in the region will have widespread consequences for the Earth and for humanity,” they write. According to an analysis also published today in Nature, the Antarctic Ice Sheet lost more than 3 trillion tons of ice in the last 25 years.

In the “high emissions” scenario discussed in the paper, by 2070 the air in Antarctica has warmed by 3 degrees celsius. It’s windier, which has altered currents, and in the summer so much ice has melted that in some places there’s none left. Several ice shelves have collapsed and the Antarctic Ice Sheets are thinning and retreating. Because of this, sea level is rising a little less than an inch a year and in the longer term will rise tens of feet—though less than two feet of sea level rise is already costing more than $1 trillion per year because coastal cities are flooding.

At the same time, in this model, regulations protecting Antarctica have been allowed to lapse. Pressures from a global population of more than 10 billion people have contributed to resource exploitation of both minerals and fishing stocks. Species already trying to cope with unprecedented ocean acidification and Antarctica’s changing geography are also contending with unprecedented human incursions from increased tourism and exploitation. It’s a bleak picture.

The “low emissions” scenario envisions a future in which global warming has stayed under the 2 degrees celsius target set at the Paris Agreement. In this future, Antarctica has become a site of continued international cooperation, an important part of the plan to combat climate change, and “a natural reserve for peace and science.”

It’s not all rosy: the consequences of even that amount of warming have prompted nations around the world to take further action to reduce emissions and engage in carbon sequestration activities. Antarctica and its surrounding environment are physically similar to what they are today, and regulation has helped the ozone hole repair itself, helping to stabilize greenhouse gas levels, but sea ice has declined and some ice shelves have been lost.

In this vision, people around the globe are benefitting from Antarctica: new compounds found in Antarctic plants are used in medicine and industry, and the inhospitable region is still used for important scientific research, leading to new discoveries as well as new techniques for things like renewable energy production and storage, and building efficiency.

If that last picture sounds too idyllic, don’t worry. Neither of these two imagined futures is likely to forecast exactly what will happen in the next 50 years, but they offer researchers, policy-makers and the public two pictures of what could happen.

That’s what this paper’s authors set out to do four years ago when they came together to imagine this Antarctic speculation. “There is very little historical precedent for the changes we’re seeing,” says Martin Siebert, one of the paper’s authors. Without a past to look to for predicting the future, he and his coauthors set out to make scientifically-grounded estimations of what Antarctica’s tomorrow could look like.

The scientists were all part of a fellowship, and they came together because talking about all the disparate changes in Antarctica, he says, “we started to wonder where all these changes are leading us.” He and his coauthors are hoping people will engage with their paper, which is being presented next week at a prominent polar conference in Davos, Switzerland. “We do want people to think of it in terms of a conversation,” he says.

This paper “really gets at the big driving questions we’re looking at in Antarctica,” says University of Washington glaciologist T.J. Fudge, who was not involved in the study. Fudge says the scenarios laid out in the paper are based on solid evidence, and even though this kind of interdisciplinary predictive scholarship is rare, the scientists involved “do not have the reputation of being excitable and pushing extremes.”

Given Antarctica’s complexity and global impact, its state of peril merits this kind of groundbreaking treatment. “What goes on in Antarctic will happen to the world,” says Siebert. What will happen in the next 50 years remains to be seen.