Ancient climate change may have dragged the wild horses away

Maybe that's why none exist today. 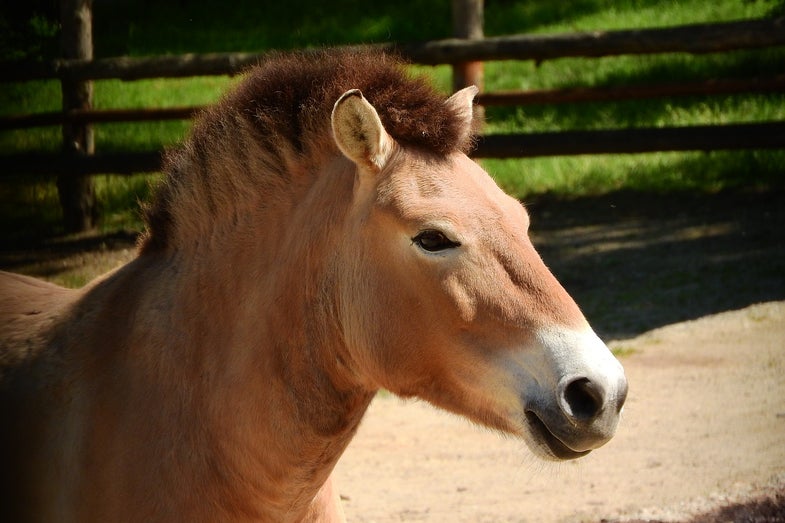 It’s hard to imagine an ice age would be the ideal climate for horses, but almost 12,000 years ago, it was. Swathed in short shrubs and dry grass, the open tundra was a perfect place to gather, graze, and keep an eye out for predators. But when natural global warming turned up the thermostat on the Pleistocene period—or what some refer to as “the Last Ice Age”—the grasslands disappeared, and so did the wild horses.

At least that’s what new research suggests. Ludovic Orlando, a professor of molecular archaeology at the University of Copenhagen, helped create a database of more than 3,000 horse fossils spanning 44,000 years—one of the largest collections to date—and noticed a steep decline in wild horse populations across Eurasia once the Holocene period (the beginning of the warm weather we live in today) hit 11,700 years ago.

Orlando says it was likely the disintegration of habitats that led wild horses to a similar fate (although not so permanent) as fellow prairie animals like the woolly mammoth.

“The results show the consequences of climate change, and that habitat fragmentation and climate are very likely related,” says Orlando, author of the study published last week in the journal Science Advances.

At the beginning of the Holocene, an organic influx of warm weather sprouted dense forests blanketed with moss, which was ideal for some species, but threatened the survival of others. Animals had to adapt quickly, and scatter in search of food—all while avoiding being hunted to extinction by humans.

“What probably happened at end of the Pleistocene, is the global warming that occurred reduced population sizes a lot,” says Pete Heintzman, senior natural sciences researcher at the University of Tromsø, Norway. “It’s a period of some extremely severe climate change—changes of several degrees Celsius over a period of decades. It’s not too different from what’s anticipated to happen in the near future.”

This slow, natural period of global warmth—which along with hunting, wiped out creatures like the woolly mammoth and saber-toothed tiger—was devastating, but as Heintzman points out, it may be nothing compared to what creatures now have to face with human-driven climate change. If we keep up our rapid pace of carbon dioxide emissions (in the billions of tons each year), scientists predict we’ll soon hit a period of warming not seen in 14 million years.

This combination of hunting and global warming decimated horses in North America, but it was always thought some of the Eurasian wild horses that crossed the Bering Land Bridge connecting Alaska and Siberia millions of years previous had survived the onset of the Holocene. The sparse grasslands and new forests made vegetation hard to come by, leaving many animals to subsist in isolated clumps until domestic horses appeared. For decades, the critically endangered Przewalski’s horse was thought to be the last of Eurasia’s living wild, but other new research suggests they too come from a tamed timeline. And even that potential discovery—also made earlier this year by Orlando’s team—is now disputed by his most recent findings.

“The origins of modern, domestic horses is unlikely to be related to the 5,500-year-old Botai culture from Kazakhstan, which was most likely the smoking gun for their domestication center due to multiple bodies of evidence such as milking, harnessing, and corralling,” he says.

Orlando proposes Iberia (the tip of southwestern Europe encompassing Spain and Portugal) and Central Asia as potential ground zeroes for domesticated horses, but can’t yet say for certain. Ancient remains have helped paleontologists recently understand much about the wild horses that once roamed the earth, but the origin of horses living and breathing today remains an equine enigma.

Correction: A previous version of this post mistakenly said that horses from North America crossed the Bering Land Bridge at the beginning of the Holocene period, when in fact horses had crossed over to Eurasia millions of years previous. This has been corrected. We regret the error.