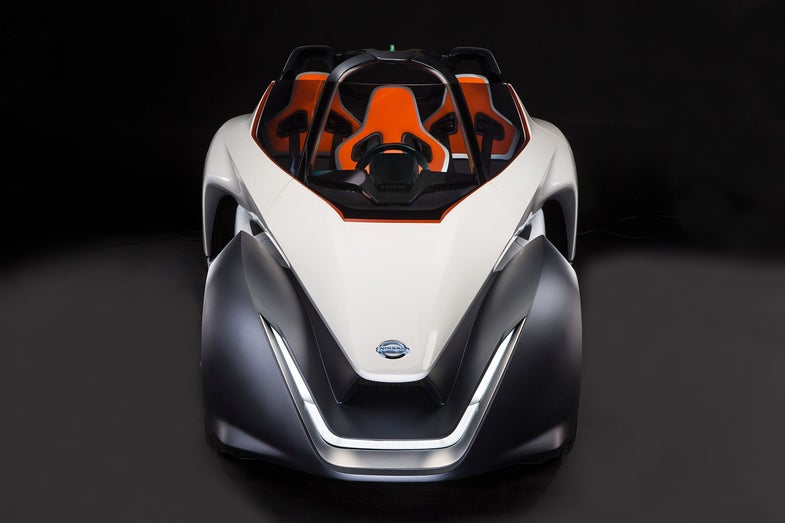 The Olympics aren’t the only thing going on in Rio right now — Nissan’s BladeGlider is also making an appearance in the Brazilian city. Nissan brought a pair of working prototypes, based on the static concepts shown at the 2013 Tokyo Auto Show, to the Museu do Amanha (Museum of Tomorrow) as evidence of its commitment to the future of zero-emissions vehicles.

The pointy-nosed, open-topped car has two 130-kW motors and a 220-kW battery with cooling systems developed just for the BladeGlider. According to Nissan’s technical partner for this project, Williams Advanced Engineering, the BladeGlider has a top speed of 115 mph and can do 0-62 mph in under 5 seconds.

It seems that the hallmark of concept cars in the twenty-first century is to do away with rearview mirrors. The BladeGlider’s rearview cameras are mounted just behind the front wheels, and the images they capture are shown on two screens flanking the central display in front of the driver. When engineers are maximizing aerodynamics to eke every mile out of an electric car, removing mirrors is an easy way to streamline a vehicle. And it’s super futuristic. Plus, the doors open up–from the rear.

Another common occurrence in concept cars is the the three-seater formation, where the driver sits alone up front and two passengers sit behind on either side. Nissan says that this allows passengers to “enjoy extended legroom,” but there’s probably a reason this design element hasn’t yet made it from concepts to production cars. For instance, it seems like it would be hard for the driver to talk to the passengers. But it does make possible the narrow front and wide rear, which enhances the car’s aerodynamics–and looks cool.

Unlike many other recent concept cars, the BladeGlider is not an autonomous car. It’s meant to showcase the company’s “Intelligent Mobility” technologies, which combine eco-friendliness and sports-car capabilities in one car. The BladeGlider is meant to be as fun to drive as it is eco-friendly.

As Daniele Schillaci, VP at Nissan, says in the video, “This is the EV for car lovers.” But will those car lovers ever get the chance to buy one in the future? Maybe, according to Nissan’s chief creative officer Shiro Nakamura: “This could be a future automotive design.”