BMW’s i8 Is Where Every Supercar Manufacturer Needs to Go 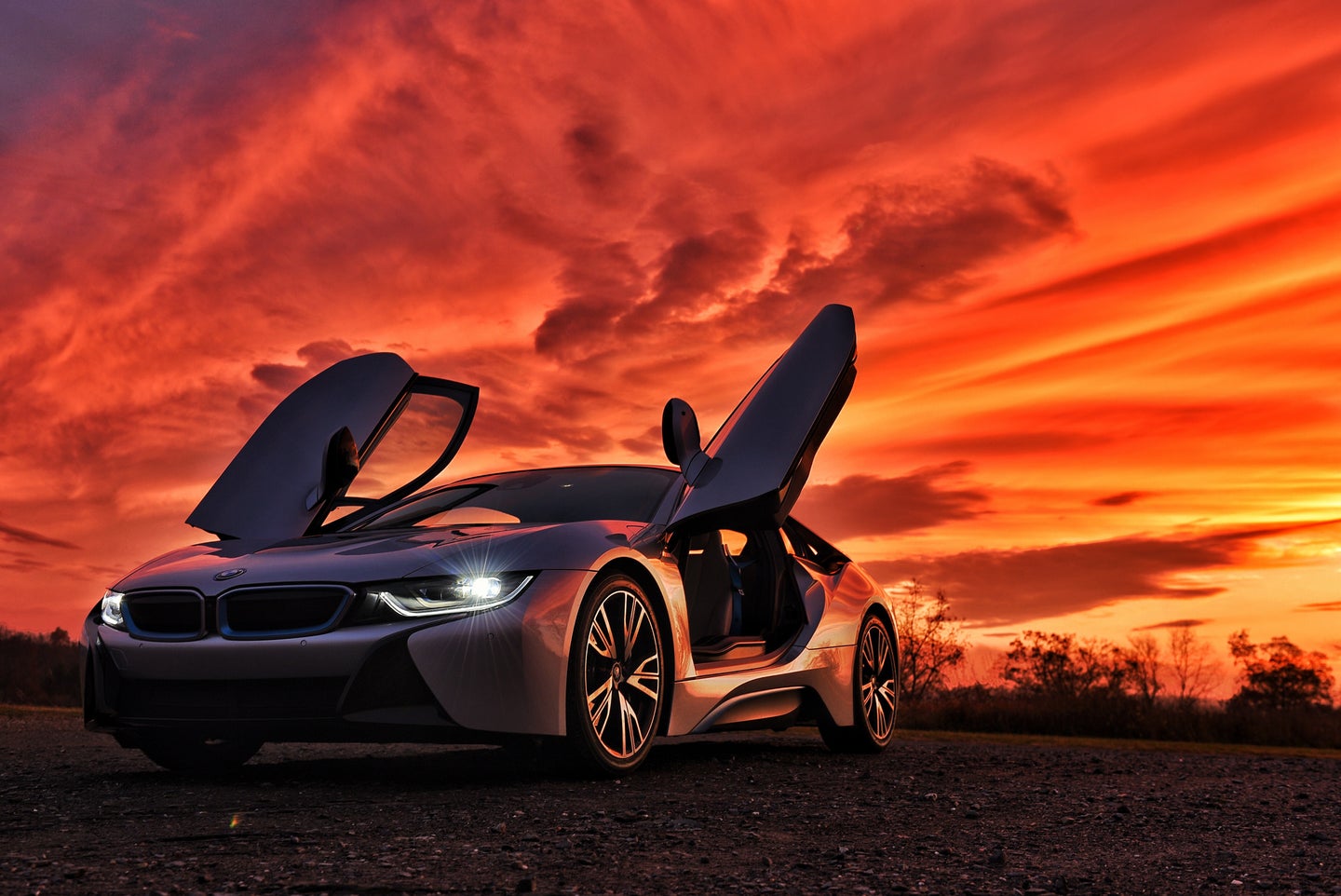 It wasn’t that long ago that every major sports car manufacturer scoffed at the idea of inserting hybrid-electric powertrains into their track-tuned road-rockets. They reasoned electric motors simply don’t light anybody’s fire. Even if you don’t particularly like that argument, it’s a fair one. There really isn’t anything like the sensation of unleashing a howling V8 on the open road, or near a gaggle of awestruck teens in the neighborhood. Performance cars exist to arouse a multitude of senses. Their engines sound amazing.

The car I’m riding in today—BMW’s fast, edgy 2015 i8 plug-in hybrid coupe—sounds, well, amazing. It has a puny-by-sports-car-standards three-cylinder, turbocharged engine that produces a modest 228 horsepower, but its exhaust note has been tuned to sound growly and menacing. (That’s helped along by a synthesized audio boost, but alas.) The car’s electric motor coughs up another 129 hp, for a very healthy 357 hp combined. That may not be Ferrari turf, but the BMW’s lightweight, carbon-fiber construction and its high-torque electric motor helps ensure that every horse is put to good use. It’ll get you to 60 mph in a perfectly spry 4.2 seconds.

But back to the big picture. Another reason electrification sat so low on the priority scale was the implicit, and largely unspoken, belief that some cars simply get a pass on the epic buzzkill that is “fuel economy.” Their drivers are wealthy enough to not really sweat gas prices, and the cars are sold in such modest numbers and driven so rarely that their impact on pollution and global warming was negligible. The world could tolerate a few thousand Lamborghinis and Ferraris shredding twisty back roads on Sunday mornings, but a few million 12 mpg Ford F-150s and Volkswagen Touaregs was a different matter altogether.

Electrification sat so low on the priority scale due to to the belief that some cars simply get a pass on the epic buzzkill that is “fuel economy.”

This, too, is a reasonable argument, even if that particular reality makes your eye twitch. But it’s reasonable only up to a point, and that point is the one where supercars become daily drivers, as they increasingly are. Porsches got there years ago, and the advanced engineering and infinitely adjustable ride characteristics of, for instance, Lamborghini’s new Huracan and the Ferrari 428 generate perfectly comfortable, docile touring cars that will nevertheless wake up at a moment’s notice so you can unleash the Kraken on that poor Camaro at the stoplight.

But thankfully, times do indeed change, as evidenced by the smooth multi-mode Jekyll/Hyde thing this i8 has going. The tiny engine (remember, three cylinders!) sits behind the two passenger seats, and the electric motor sits forward. The car switches seamlessly, or manually, depending on your preferences, between occasional all-electric use and a combination of engine and motor. If your battery has enough juice, it’ll go up to 75 mph for 23 miles on electricity alone—smooth, silent propulsion—or it will inject some turbocharged energy into your ride if you start smashing the pedal. Under normal driving, the engine jumps back and forth between charging the 7.1 kWh lithium-ion battery and driving the rear wheels, with assistance from the electric motor connected to the front wheels. Combined, it’s essentially a rear-biased all-wheel-drive system. It’s quick, responsive, and an absolute thrill to drive.

Throw in a low vehicle weight of 3,247 pounds and a drag coefficient on only 0.26, and you have stellar fuel economy. Depending on how you drive and how much charge you put into the car at your residence or public charging stations, you can score up to 78 MPG-equivalent, or 28 mpg if your mostly burning gasoline. The end result is a certifiable milestone in automotive engineering. This is easily the most important car of the year—and easily the edgiest, most sharply styled car on the road, as well. With trick scissor doors, appealing multihued coloring, assorted elevated panels, and surprising moments of non-linear design, it’s unbelievably cool. 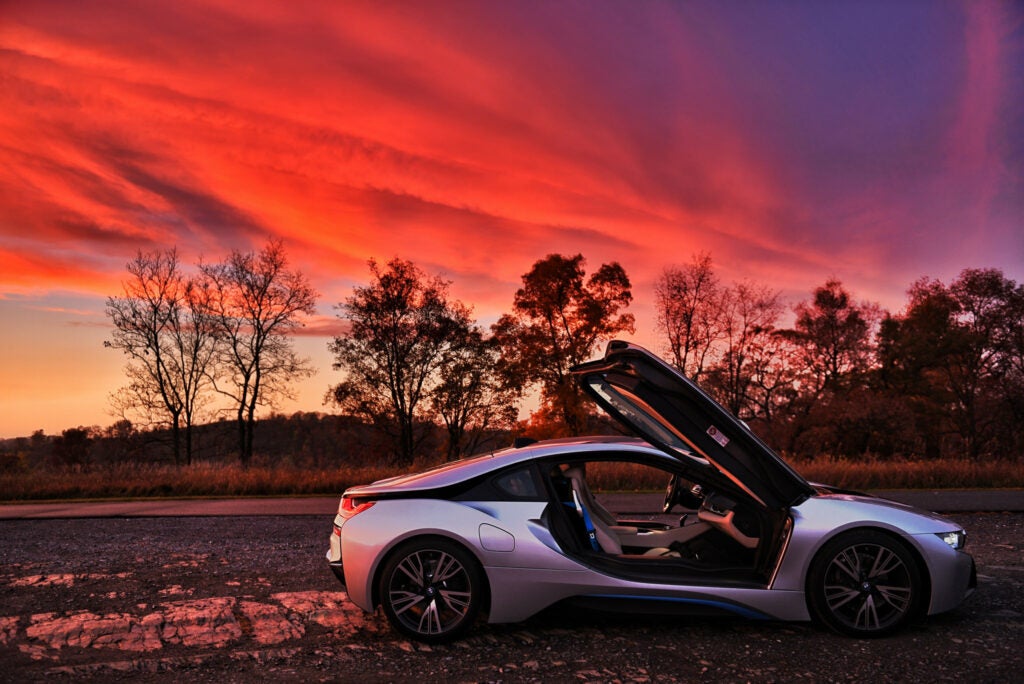 But the BMW i8 has company in this hybrid sports car turf—as it should. Even before the i8 arrived, technology had improved to the point that hybridization was recognized as much as a performance enhancement as an ecological benefit, something seen most notably in early hybrid sport-sedans such as the 2010 Infiniti M35h.

In the gradual acceptance of sports car electrification, however, is the growing recognition that managing public perceptions need to supersede baser corporate impulses. The science continues stacking up on the impact of our fossil fuel habits—not just the burning of it, but the extracting of it, as well. Carmakers can no longer be the least bit cavalier about fuel efficiency.

So now, nearly every major sports car manufacturer has a hybrid-electric. Ferrari released the LaFerrari last year with a 6.3-liter V12 engine mated to 160 hp electric motor that produces a combined 950 hp. It uses its motor in a similar fashion to the KERS system in Formula One cars—for added boost under hard driving. The McLaren P1, out this year, cranks out 903 hp from its V8 and electric motor. It can drive up to 19 miles on electricity alone. Porsche’s new 918 combines two electric motors with its 4.6-liter V8 to produce 887 hp total. It’ll go 12 miles on electricity alone—or a hot lap around a big racetrack. (But oh what a lap that would be—swift, silent, thrilling.) Lamborghini, as well, just unveiled its concept plug-in hybrid, the Asterion LPI 910-4, at the Paris Auto Show. That car will also produce more the 900 horsepower, but it could trump all others in terms of efficiency, with a claimed equivalent of 282 mpg and a 32-mile electric range.

The problem with all of these cars—and where the i8 has the keen advantage—is that each hovers in the $600,000 to $1.5 million range. They’re halo supercars. The i8 starts at a relatively modest $136,000, and it’s the only sports car in that range to deploy hybrid tech, let alone a system as innovative as this one. Tesla’s fully electric Model S is certainly lurking in this corner, as well, but while it does have sensational handling and acceleration, that’s compared to other performance sedans. It’s still a four-seater and it weighs nearly 1,000 pounds more than the i8.

So while it’s clear that the supercar makers are now fully on board with electrification, none of them have truly put their money where their mouths are and produced a “mid-range” electrified sports car. When the next round of sub-$250,000 sports cars comes out—from Lamborghini, McLaren, Porsche, and Ferrari—they absolutely need to be as competitive as the i8. The same is true of the cars below it, the Corvettes and Mustangs of the world. The bar has been set, and there’s no bringing it back down. 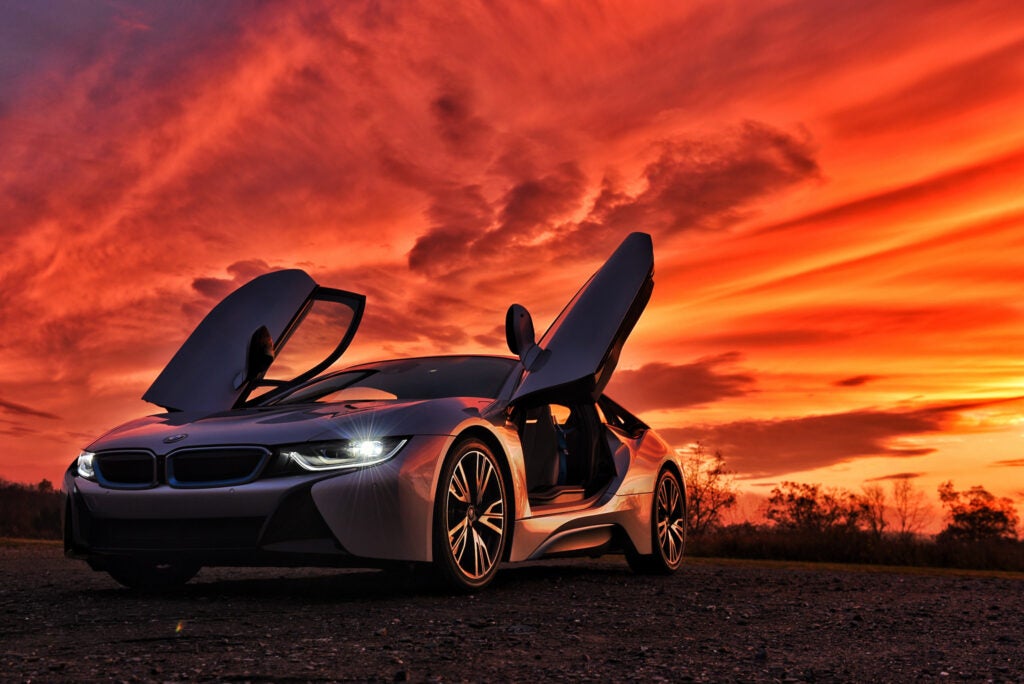 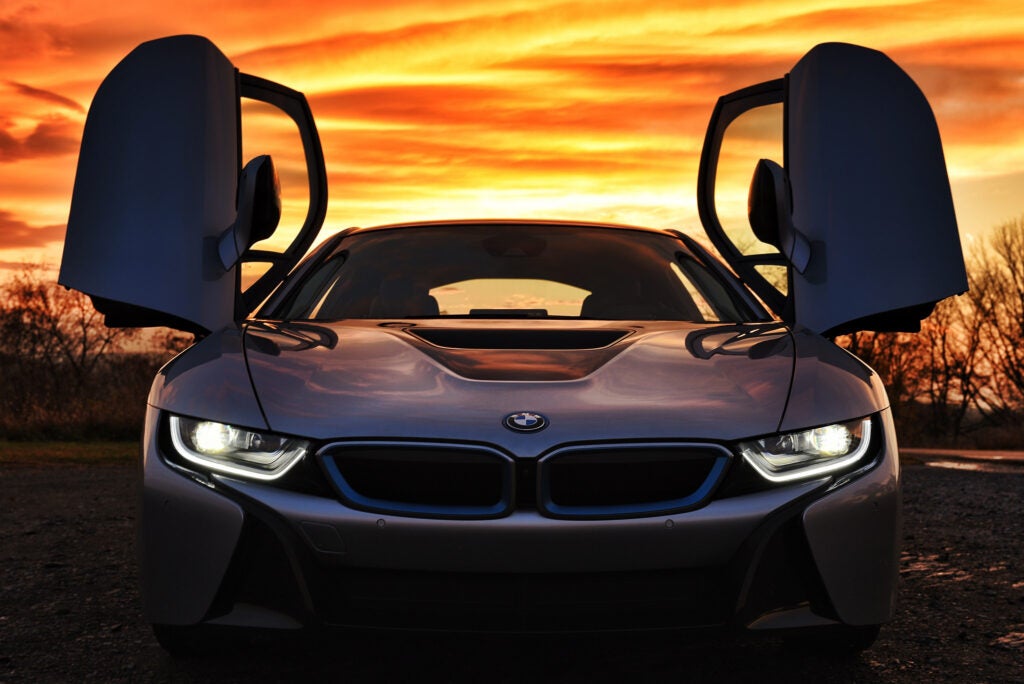 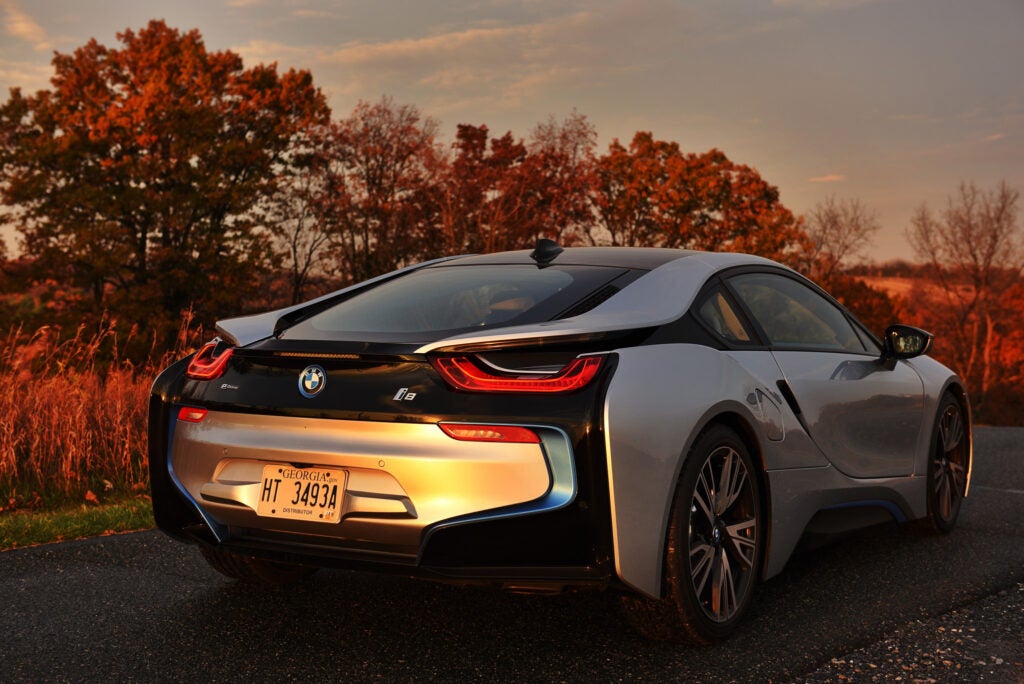 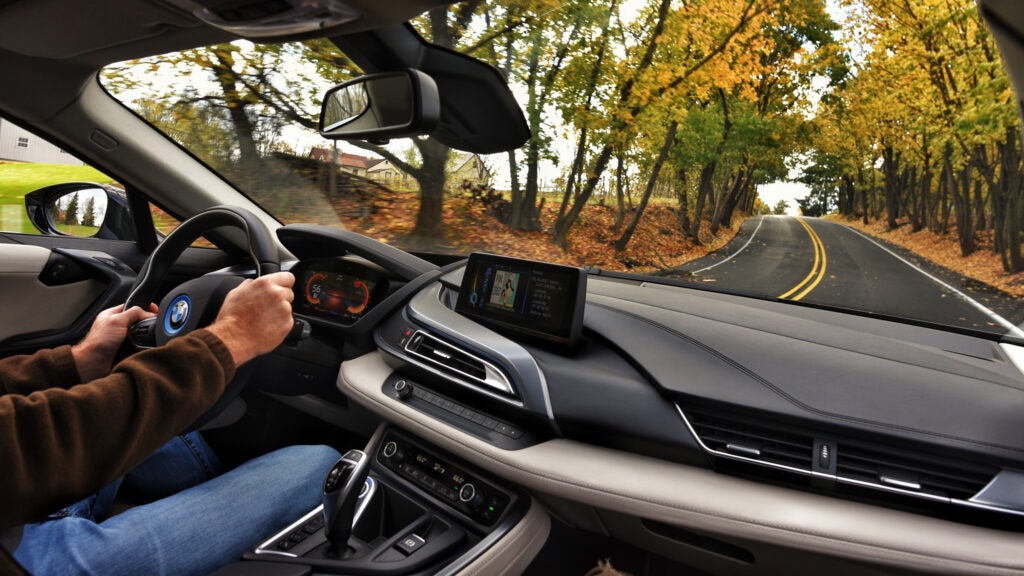 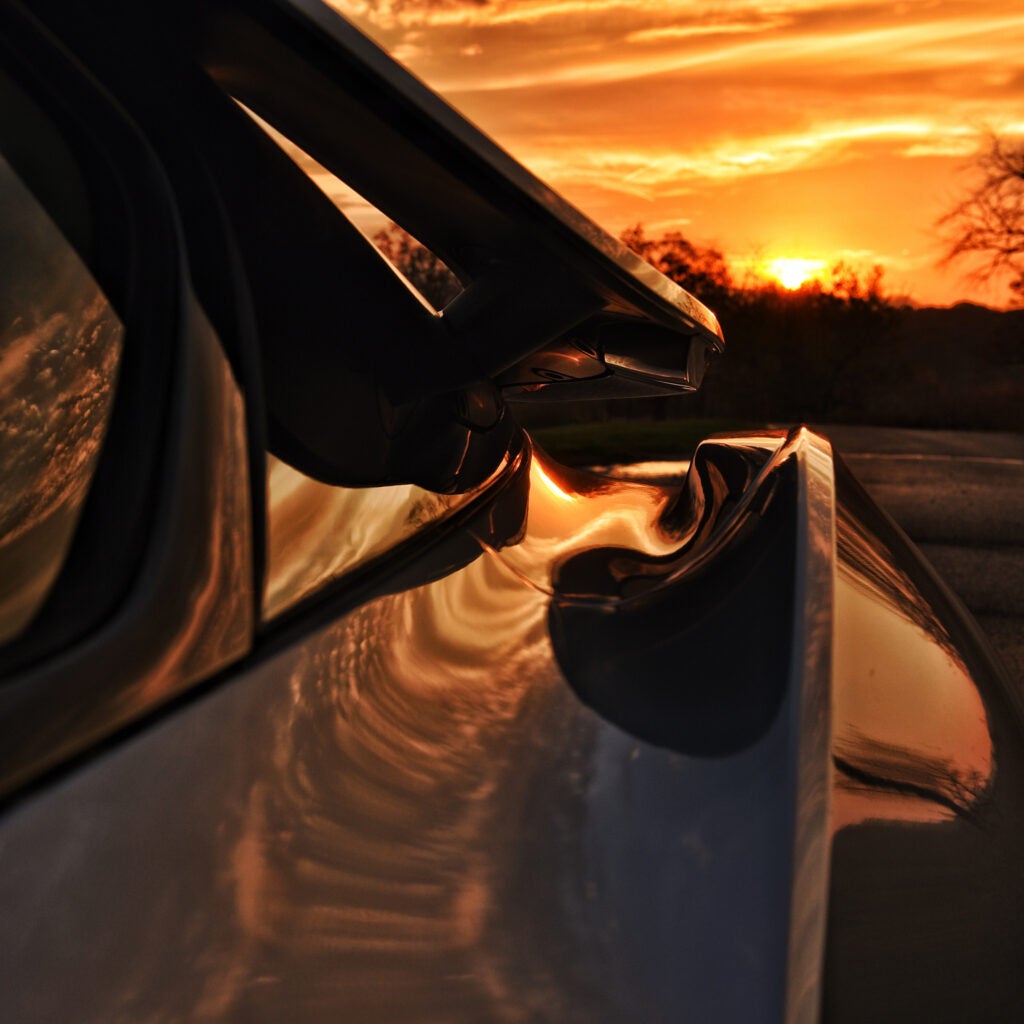 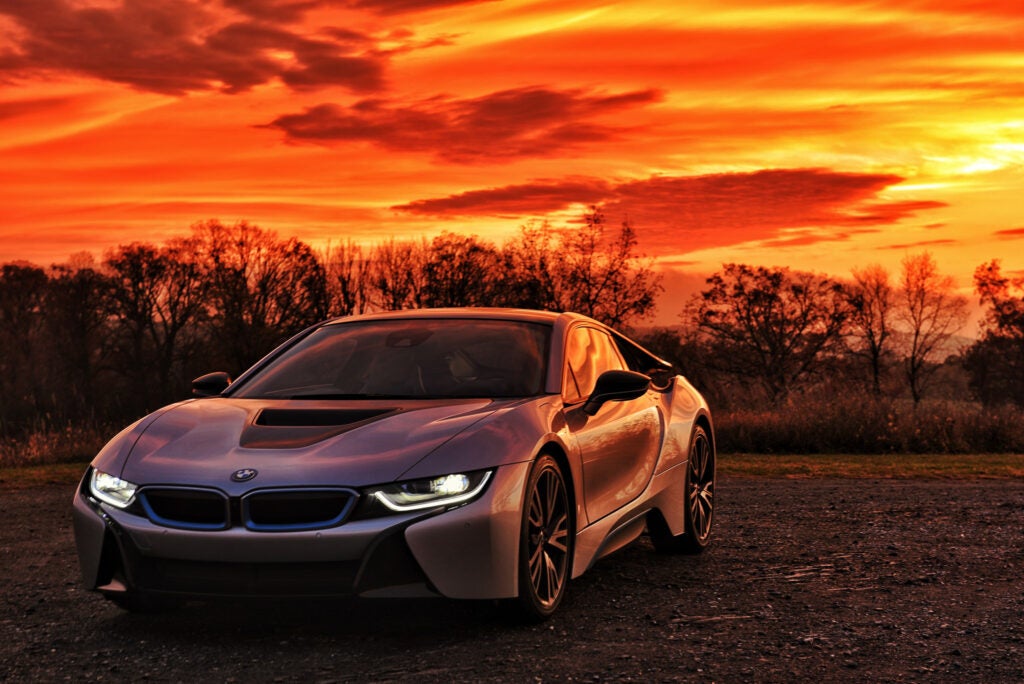