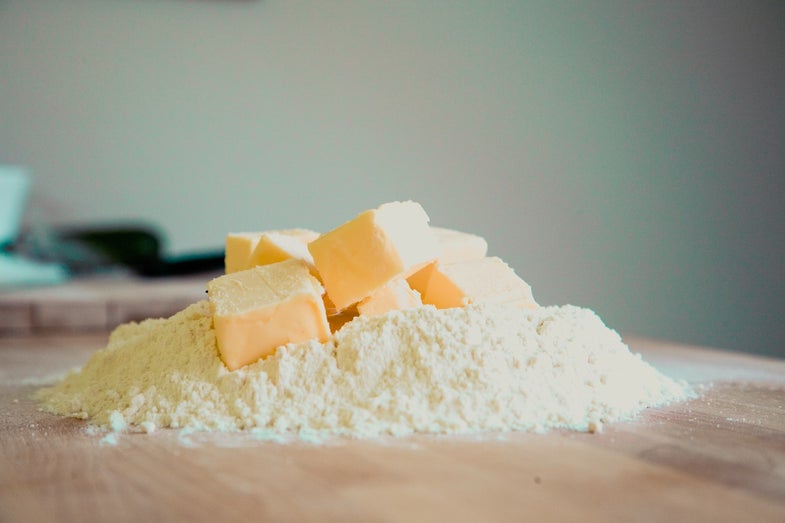 In 2006, New York City passed a law banning artificial trans fats, also known as partially hydrogenated fats, in all restaurant foods. The law was first applied to fried foods—but not fried bread products like donuts—before taking effect for all restaurant foods in July 2008. A study released on Wednesday in the Journal of American Medical Association Cardiology found that the law, criticized by some as evidence of a “nanny state”, actually lead to a six percent decline in hospitalizations and strokes. To understand why, it helps to know what trans fats are and what they do in the body.

It’s been known since the 1950s that eating a lot of saturated fats is associated with heart attacks and poor cardiovascular health. Saturated fats are a kind of fat found primarily in animal products like lard and butter (though palm oils are a notable exception) and tend to be solid at room temperature. They get their name because, while all fats are made of long chains of carbon atoms, the carbon molecules that make up saturated fats share no double bonds—instead, they are “saturated” with hydrogen molecules. This means they’re solid at room temperature, which makes them great for a variety of cooking purposes, in particular deep frying and the flakey goodness associated with pie crusts and perfect croissants.

Unsaturated fats, which tend to be liquid at room temperature, share double bonds between their carbon molecules and are often, but not exclusively, found in vegetables oils. Monounsaturated oils—like corn, peanut, and soy oil—have just one double carbon bond. Polyunsaturated fats (the so called ‘healthy fats’ like the omega-3 fats found in salmon or olive oil) have many double carbon bonds.

The problem is that while unsaturated fats are healthier, they’re also tougher to use. They aren’t as versatile (as anyone who has attempted to substitute corn oil for butter in a cookie recipe can attest). And saturated fats, apart from being artery cloggers, also tend to go rancid (as anyone who regularly uses lard knows). In the 1950s, researchers realized they could substitute animal fats with vegetable oils by using a hydrogen reaction to turn an unsaturated fat into a partially hydrogenated fat—one with many of the same properties as a saturated fat, but with less, well, saturated fat. Voila, they made margarine.

Researchers didn’t invent trans fats—not exactly. Trans fats are naturally present in meat, but only in minuscule amounts. By finding a process to turn unsaturated fats into partially saturated fats, however, scientists set the stage for people to consume a lot of trans fats all at once for the first time.

In the 1980s, health activists actually encouraged people to consume margarine in lieu of butter, and Crisco in lieu of lard, and pressured McDonalds to remove the beef from its french fry oil. It was all under the belief that the partially hydrogenated fats—because they contained less saturated fat than butter or lard—were healthier. And food manufacturers loved the stuff, because it was so versatile. Really, really versatile: Oreo’s filling and the stuff you deep fry donuts in are essentially the same thing. But by the time New York City implemented the ban, they’d realized that the stuff was no good.

The JAMA study, which analyzed data from the New York State Department of Public Health from 2002-2013 and compared rates of hospitalization between the 11 New York State counties (five of which comprise New York City) which banned trans fat between 2007 and 2011, suggests that the research is right. Trans fats can be deadly.

Unfortunately, many manufacturers are turning to palm oil instead. That may be better for human health, but is detrimental to the environment. The plantations used to harvest the oil have been linked to the destruction of mangrove forests and the decline of the orangutan.