Fat, I wish I knew how to quit you. 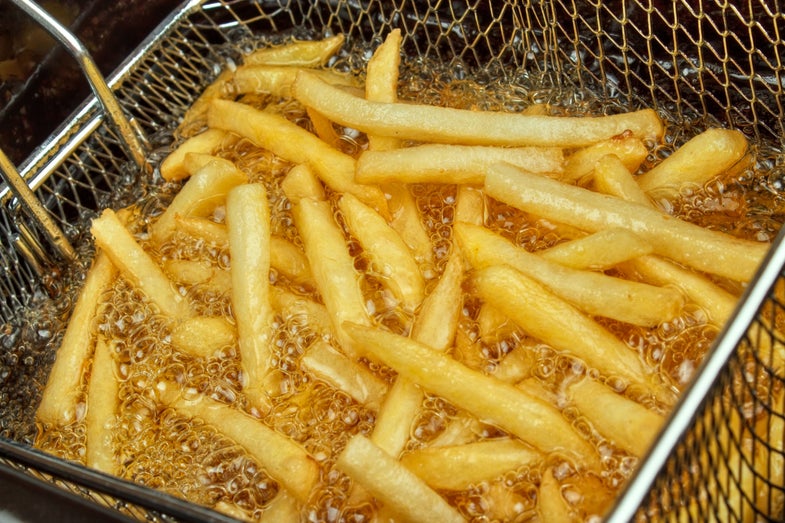 One of my most vivid childhood memories revolves around willfully subjecting myself to stomach cramps and explosive diarrhea. Yes, like so many ’90s children-of-the-calorie-conscious, I basically ate my weight in WOW chips whenever possible. The Frito Lay snack line replaced fat with a zero-calorie substitute called Olestra. This feat of chemical engineering mimicked the mouthfeel and taste of oils usually found in junk food, but if you consumed it in great excess (which you did, obviously, because those chips were fat frickin free) it had the unfortunate side effect of sliding right through you and busting rather obnoxiously out the other end.

I knew that eating these chips would make it feel like someone stuck their hands into my abdomen and squeezed my guts around, but I also knew they tasted delicious. And that I was allowed to eat as many as I wanted, because they were “healthy.” So during a family gathering at my grandma’s house, I absconded with an entire bag. They tasted divine, and I spent the rest of the day in, well, probably the worst abdominal pain I would experience until getting appendicitis a few years later.

Why couldn’t I quit those damn chips?

Of course, humans are meant to crave fat because it’s an important part of our diet, and a great source of calories. Our most basic tastes evolved over the thousands of years we spent hunting and gathering, so the fact that many of us are now surrounded by an excess of fatty foods can’t do much to dissuade our brains from desiring them. Since we can’t change our cravings (at least not easily, and definitely not on a societal level) scientists have spent the last few decades trying to change our food instead. Fat may not be demonized as much as it was in the ’80s and ’90s, but even as scientists circle back to the idea that a balanced diet is the way to go, the fact remains that a great number of us consume more calories than we should—especially in the form of low-nutrition junk foods. And fat is often a major player in those treats.

Still, we haven’t yet figured a way to swap fat out for a healthier substitute.

“Replacing fat is hard, because fats just have a lot of great properties,” says Jade Proulx, a lead food scientist for the research and development team at JUST (formerly known as Hampton Creek). JUST focuses on replacing animal products with vegetable-based alternatives, so Proulx spends plenty of time chewing on the problem. “There’s richness, obviously, and fat gives you a creamy mouthfeel, which is a very ill-defined concept—a combo of thickness, smoothness, and having kind of a lubricating or mouth-coating aspect. It’s also a great reservoir for flavor molecules that aren’t soluble in water.”

In addition to providing a certain hard-to-pinpoint textural experience that screams decadence, fat aids in flavor delivery to boost the enjoyment of many dishes. We even experience fatty acids as a sixth taste, just as we experience sweetness and bitterness. It’s not pleasant on its own, but it may mix in with other notes to give us a profile we unknowingly relish.

It’s hard to replace something when so much of its appeal is a certain je ne sais quoi. But folks have sure tried.

“Historically, when we talk about animal fats, one of their main properties is that they’re saturated, which makes them solid at room temperature,” Proulx says. This comes in handy if you want, say, a cupcake with frosting that doesn’t melt before you eat it. Coconut and palm oil are saturated fats as well, which means the chains of carbon atoms they’re made of hold as many hydrogen atoms as possible. Saturated fat can raise your LDL cholesterol (the bad kind), so it was the first target in the war on fat.

“The solution was to partially hydrogenate liquid oil,” Proulx explains, which is a process that turns unsaturated fats—liquids like vegetable oil—into solids. “But that created trans fats, which is a whole new problem.” In fact, trans fats may actually be the unhealthiest version of our favorite macromolecule.

“The next move was to go for more exotic sources of saturated fat, such as palm or coconut oil,” Proulx explains, but animal-based or not, saturated fats still carry the same health concerns. And plant-based alternatives often come with troubling environmental consequences.

That leaves food scientists like Proulx looking for more complex solutions. There’s no good way to just swap fat out for a healthier version of itself without sacrificing taste, so instead we try to take some or all of it away entirely and replicate its would-be contributions to the dish.

“In a wide range of fat-free cheeses or yogurts, you’ll find ingredients meant to provide more body and texture, such as gums or sometimes starches,” Proulx says, “and you can still notice the difference. It doesn’t have the richness, the smoothness.” Indeed, research shows that people generally expect low- or nonfat foods to taste worse than the real thing. “It’s very much about the richness, the mouthfeel fats can provide.”

At JUST, which makes plant-based mayonnaise alternatives, cookies, and faux scrambled eggs but dabbles in toying with formulas for things like ice cream as well, the goal is to find the tastiest and most healthy versions of these workarounds. She says thinking about the structures fats create can be helpful.

“With mayo, you start with liquid oil and end with something thick, something you spread,” she says. Mayo and cream are both emulsions; two liquids that don’t generally mix can be manipulated, using droplet size and careful combination techniques, to pseudo-blend. One liquid is still technically suspended in the other, but this happens on such a tiny scale that they seem to form a single, cohesive, creamy combo. “Having a proper emulsification can be part of a strategy to lower or replace saturated fats, because that nice structure can fix the texture problem,” Proulx explains. Creating the right size of oil droplets can create the kind of satisfying, mouth-coating, fatty sensation we crave. Proulx says there are a lot of complicated spins on this idea that are still in their early, academic stages, but might one day be commercialized.

“I think that’s the right way to think about it, where you vary the ingredients instead of chemically altering something to replace fat,” she says. “It just also happens to be the hard way.”

Proulx remembers Olestra too: as a cautionary tale. Olestra still shows up in products in a few countries, and studies have sort of exonerated it—the diarrhea only happens if you eat a lot of chips. Then again, who eats low-calorie chips if they don’t want to eat a lot of them? In any case, there’s a reason the market isn’t flooded with chemically-engineered fat alternatives.

“I remember when I was being trained as a food scientist, we were taught that exact case study. I think the right lesson there is that yes, you can make something that has the right properties, but understanding how it acts at a biological level when people eat it is very important,” Proulx says. “Chemical modifications, while they can work from a functional standpoint, may have metabolic effects we should be cautious of.”

In other words, they might make you poop a lot. Maybe one day scientists will design the ultimate fat mimic, whether by tweaking a chemical’s structure or by whipping up the perfect cocktail of non-fat ingredients. Until then, we’re stuck enjoying the real thing.