The case for full-fat yogurt

Dairy fat may be saturated, but it's not unhealthy the way animal fats are. 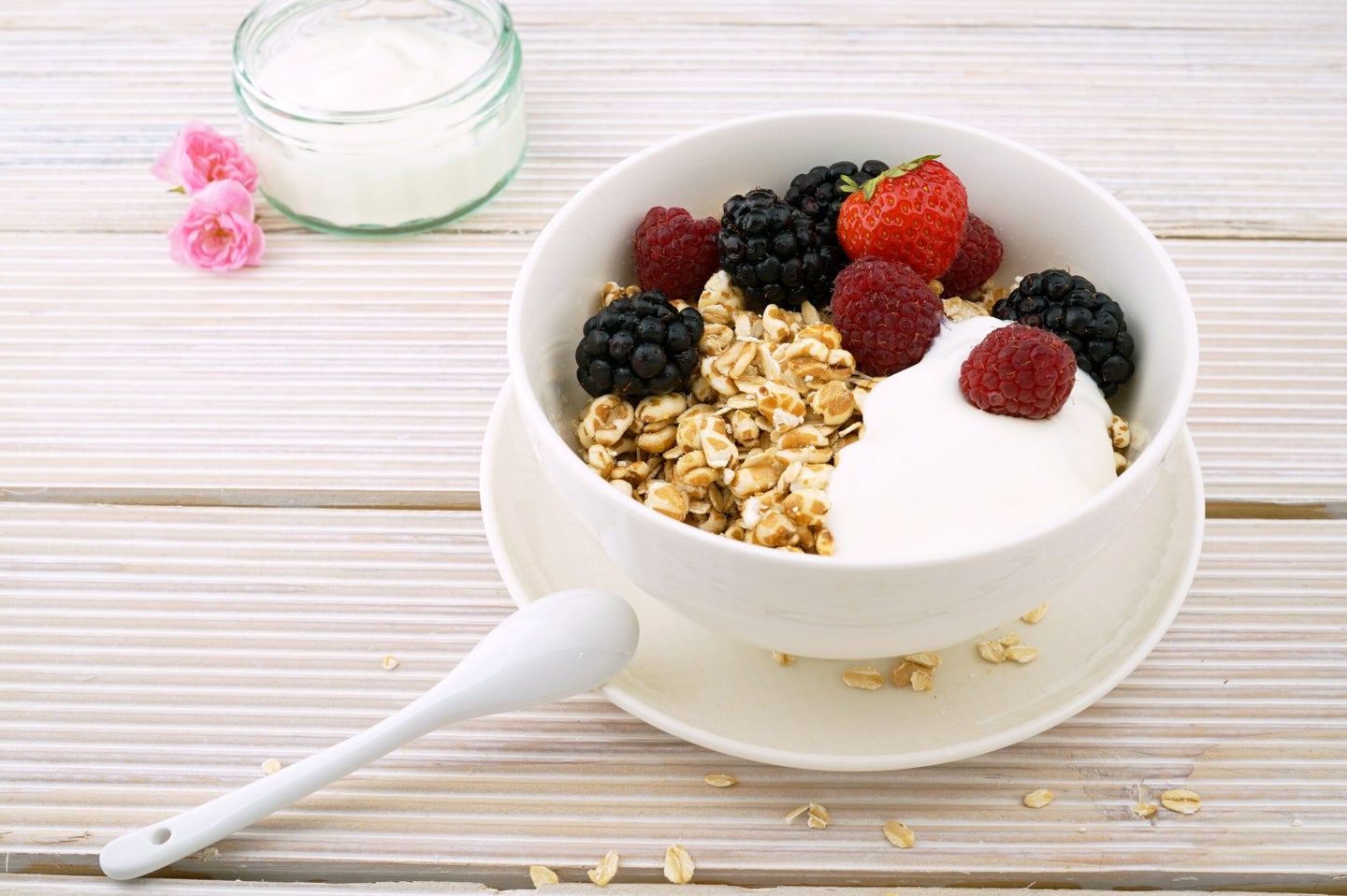 Not all fats are created equal. There’s the dangerous trans fats, the healthy unsaturated fats, and the middling saturated fats, but even within that final category there are variations. That marbled steak? Bad for you, in non moderate amounts. But that creamy yogurt? It might actually be good for you.

One recent study brought the issue of full-fat dairy to the headlines this week, but this is far from the first study to question the assumed unhealthiness of dairy fat. Researchers have been zeroing in on the health consequences of t dairy fat for a long time. On the whole, studies show that people who eat full-fat dairy tend to be just as healthy or even healthier than those who choose the low-fat options. Let’s talk this through.

Saturated fats get their name because the long carbon chains that make up the molecules are stocked full of hydrogen molecules. And they are easily distinguishable from their unsaturated counterparts as they turn solid at room temperature. Animal meats contain almost exclusively saturated fat as do dairy products and a few other oils such as coconut. Many large-scale studies have linked saturated fat intake with obesity, high cholesterol, and heart disease. The assumption for had been that the link held for all saturated fat, but some more recent studies point to a potentially different conclusion, that only the fats in animal meat, not the ones in dairy, raise our risk of heart problems.

The most recent study followed 2,907 Americans over age 65 without cardiovascular disease for 22 years to see which would develop heart problems. Observational studies like this would usually survey participants to see which ate full-fat dairy and which opted for low-fat versions, then would compare those two categories. Instead, this group measured fatty acid levels in the participants’ blood. Fatty acids are a kind of blood lipid (the other main one is the well-known cholesterol), and levels of these molecules help determine your cardiovascular disease risk. The lipids in saturated fats tend to be unhealthy, but these researchers found that the fatty acids from dairy are different. By measuring the levels of dairy-specific fatty acids, the researchers could figure out which people ate more dairy fat than others and tie that to health outcomes like stroke, cardiovascular disease, and overall mortality. As it turns out, most of them had no influence on mortality. One, called heptadecanoic acid, was associated with a lower risk of stroke. But overall, the authors wrote, “the findings from our investigation and previous studies suggest no major effects of dairy fatty acids on CVD risk.”

Another study on cardiovascular disease found that amongst 3,333 adults who were not diabetic at the beginning of the study, those that had higher fatty acids in their blood (and were therefore eating more dairy fat) had a lower risk of developing diabetes. A clinical trial that assigned 164 people to eat either full fat, low-fat, or no cheese (but an equally-caloric amount of carbohydrates) for 12 weeks found no differences in their LDL (“bad”) cholesterol levels or risk factors for metabolic problems, like diabetes. Levels of “good” or HDL cholesterol were higher amongst those who ate cheese, though, so rejoice in that.

One paper that used data from the Women’s Health Study, a massive, long-term observational study, looked at 18,438 women of normal weight over 45 to see whether eating dairy influenced their likelihood of becoming overweight as they went through menopause. The women who ate full-fat products had a small but significant lowered risk of gaining weight, and those who ate the most fatty dairy had the lowest risk. Those who ate low-fat versions were no less likely to be obese than those who ate no dairy.

A meta-analysis of 16 of these kinds of studies found that on the whole, high-fat dairy consumption was associated with lower risk of obesity and either a lower or equal risk of metabolic health problems (like diabetes). Another similar meta-analysis looking specifically at what causes hypertension found , again, that eating fats from dairy was inversely correlated with hypertension (a.k.a. High blood pressure, which itself is associated with cardiovascular disease).

Researchers aren’t exactly sure why dairy fats are better for you than animal fats. Various theories suggest that it might be how filling they are (maybe you eat fewer calories overall when you have fatty yogurt), or perhaps that there’s some impact on insulin regulation. Cultured dairy, like yogurt and cheese, also have microbes that may contribute to a healthy microbiome—maybe that works in your favor weight-wise as well. Manufacturers also tend to add sugar when they remove fat from dairy products, so some scientists think low-fat versions may be a bit worse for your metabolism in that way. And any low-fat yogurt with added flavor tends to come along with a much higher sugar load.

But all of this shouldn’t mean you go out and buy all those creamy yogurts just yet. Though fat is more satiating and may indeed improve your heart health, it’s also important to remember that fat is highly caloric. It contains nine calories per gram, which is double that of sugar and protein, so we should all be eating fat (and everything) in moderation. Consuming full-fat cheese won’t help you lose weight if you’re eating it on top of a whole pizza. Harvard researchers suggest chowing down on cheese and yogurt alongside something healthier, like fruit or nuts or whole grain crackers, rather than refined carbohydrates.

So go ahead and eat that ultra-creamy brie—just put it on some pears. And don’t overdo it.