Is bicycling a cancer-fighting miracle? Probably not.

No more than regular exercise, anyway 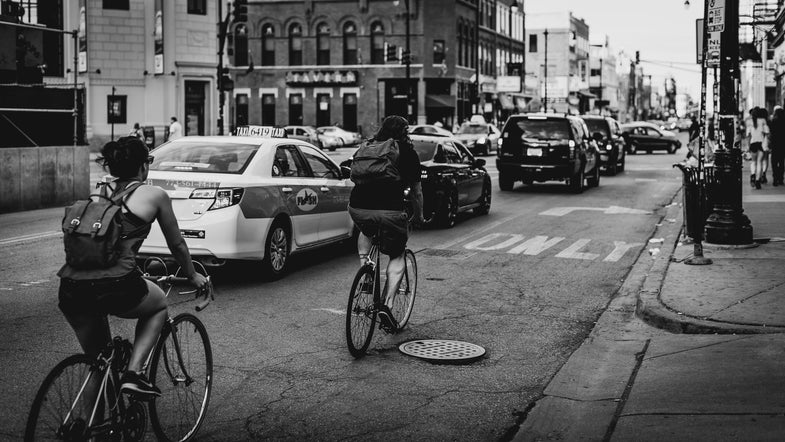 This doesn’t mean that if you take up cycling you’ll reduce your cancer risk by 45 percent. The study is correlative, not causative. What this means is that the researchers, who are from the University of Glasgow in Scotland, looked at a large population of people and compared their behaviors against a list of negative outcomes—in this case, cancer and heart disease. And they found that those who incorporated a cycling into their commute tended to be the healthiest (in terms of not getting cancer and heart disease, anyway).

Their study examined 263,450 people whose information was pulled from the U.K. Biobank—basically a large collection of information volunteered by British residents between the ages of 40-69, tracking many lifestyle behaviors and genetic markers. The Biobank exists so researchers can get a better sense of what factors contribute to a host of ailments, like cancer and heart disease.

What they discovered is that people who cycled to work experienced a much lower rate of heart disease and cancer than the baseline of non-active people. Those with a mixed-mode cycling commute (which mixes a non-active commute with cycling—maybe you bike to a train station, for example) experienced the second greatest reduction. But none of this means there’s anything magical about cycling.

Why is it that the cyclists received the greatest health benefits? The answer is probably related to how much each group actually exercised.

The United Kingdom recommends 150 minutes of moderate aerobic activity a week, 75 minutes of vigorous activity a week, or 30 minutes of a mix of moderate and vigorous activity each day. In this study, cyclists were the people most likely to hit that recommended exercise benchmark. Is that because cycling makes for such a vigorous commute that it takes care of a person’s exercise needs, or are people who choose to cycle to work likely to be more generally jazzed on the idea of exercising, and perhaps pick up other aerobic activities throughout the week? Probably a little of both.

What is clear is that 90 percent of cycle commuters hit the current recommended amount of physically activity, as did 80 percent of mixed-mode cycling commuters. Compare that to the walkers: just 54 percent of walking commuters met the recommended amount of physical activity, and mixed-mode walking commuters weren’t any more active than sedentary commuters. In other words, cyclists were the most active of the bunch, and a ton of studies have shown that exercise is the closest thing to a wonder drug. Even so, an individual’s cancer risk is determined by a complex web of factors that remain woefully misunderstood—genetic predispositions, environmental triggers, and differences in lifestyle all likely play a role—so even this wonder drug has hard limits.

Still, there’s certainly no harm in getting active—and staying that way—whether or not your daily routine involves a bike ride to work.