Why are the measles coming back? 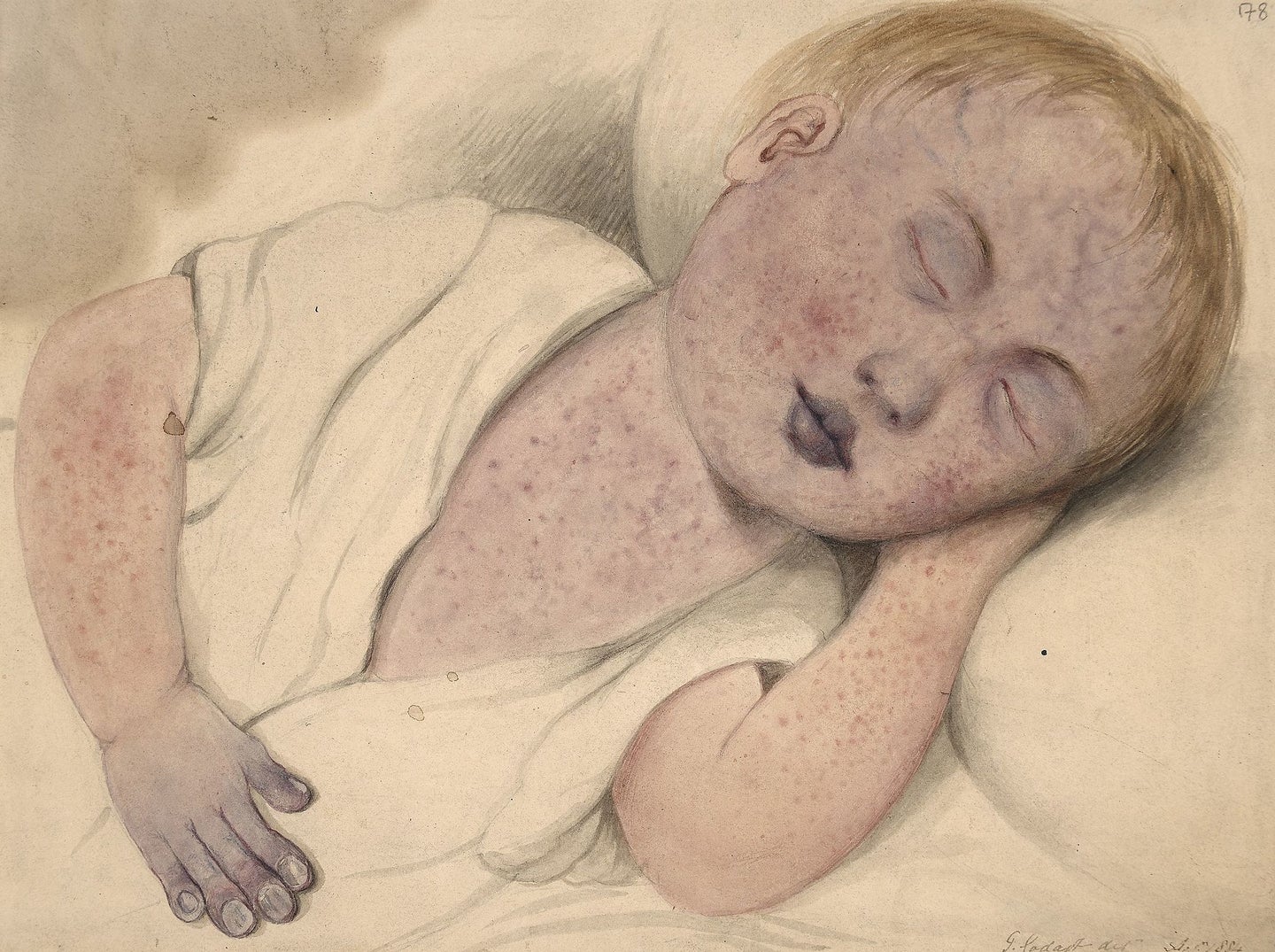 We eliminated measles in the U.S. in 2000. Somebody should tell the measles. Because even though the virus has no permanent home stateside, it keeps getting in—more and more, it seems.

If you were born in the U.S. after about 1968, you’ve lived your entire life with virtually no interaction with the measles. Consider yourself lucky. The virus causes fevers over 104°F, inflamed eyes, a cough, plus a rash that begins as tiny white spots and becomes an itchy red mass spreading outward from the head to cover your entire body. And that’s just your basic measles encounter. About 30 percent of measles patients get extra complications, including diarrhea, pneumonia, brain inflammation, and permanent blindness. In healthy areas, few people died of the disease—only about 0.3 percent—but in impoverished or malnourished populations that figure jumps up to around 30 percent.

Before the measles vaccine, 3 to 4 million people got the disease every year and basically everyone had gotten it by age 15. That might sound like pretty good news. If everyone gets it as a kid, surely it’s like chicken pox—you get it, then you’re over it. In some ways, that’s right. But it also means that the potentially permanent complications (and the fatalities) disproportionately affect little kids.

We’ve kind of forgotten what it’s like to live in a world where young children regularly get serious diseases. It’s difficult to notice an absence of deaths, so here’s some perspective: from 2000-2012, the measles vaccine saved about 13.8 million lives. If we continue the way we’re going, though, we might get a different perspective. From 1989-1991, measles saw a huge comeback because people weren’t getting vaccinated enough—and we may not be too far from that happening all over again. Here’s why:

With fewer people vaccinating their children, we’re losing the herd immunity that has protected most of the U.S. for decades, and though the measles virus isn’t endemic to the states anymore, it’s not like we’re cut off from the world. In the last decade, almost all measles cases in the U.S. could be traced to someone who was infected abroad. And many of the subsequent outbreaks were boosted by populations who had refused to get vaccinated, like Amish communities or other groups who objected on religious grounds. In a study of 970 measles cases, epidemiologists found that 60 percent of the patients hadn’t gotten the vaccine even though they were eligible to get it. Of those, 70 percent had non-medical reasons for exemption.

The real problem is that their decision to not get vaccinated doesn’t only affect them. And that’s because…

Like, actually one of the most contagious diseases out there—it’s on the Centers for Disease Control’s list of contagious diseases alongside cholera and tuberculosis. For every 10 people exposed to an infected measles patient, nine will get measles themselves. Think about that for a second. If you worked in an office of 21 people and one person came in with the measles for one day (which is pretty easy—you’re contagious before you’re symptomatic), only two employees would stay healthy. Everyone else would be home sick or hospitalized for at least a week.

That’s why the vaccine was such a big deal. Measles spreads through the air and it’s easy to get infected. Though that’s not to say the vaccine is foolproof…

You probably assume that if you got the measles shot as a kid (it’s now combined with mumps, rubella, and sometimes varicella to make the MMR or MMRV vaccine), you’re immune to measles. Period. Surprise! You might not be. The measles vaccine is pretty amazing—with the recommended two doses, it prevents 97 percent of cases, and with just one dose it still covers you 93 percent of the time. But it’s also possible to lose your immunity over time, or for the vaccine to have simply not given you a strong enough protection in the first place. In that study of 970 measles cases, 40 percent were in people who had gotten the shot. Getting a vaccine doesn’t always mean you’re immune, so if you’re at all anxious talk to your doctor about getting a test called a titer, where they check your blood for antibodies against the measles vaccine to make sure it worked. And really, you should get the titer no matter what, because you never know.

The key thing is a vaccine’s imperfection isn’t a reason not to get it. You hear this argument less with measles and more with the flu—if I can’t be sure it will work, why would I even bother getting it? Because the flu, like the measles, is awful. You really don’t want to get either disease, and it’s worth it to cut your risk down significantly. But more importantly, you’re not really getting vaccinated for you. You’re getting vaccinated for the good of the many.

Herd immunity is a term that gets tossed around a lot when we talk about vaccines. And there’s good reason, especially when it comes to measles. The more contagious a disease is, the more people you need to vaccinate in order to prevent outbreaks. And for measles, your coverage needs to be about 95 percent, especially for those groups like young children, immunocompromised people, and the elderly. Do you want to guess how many states have enough coverage in school-aged kids? It’s 22. How about the number of states with enough coverage in kids under age three? Just nine.

The rates are higher for adults right now, but if kids aren’t getting vaccinated young it’s likely that future adult populations won’t be so resistant to measles. And in the meantime, we’re exposing people who actually can’t get the vaccine to a potentially deadly virus. Kids and adults who are immunocompromised aren’t allowed to get vaccinated, and those people are also the most susceptible to contracting a deadly case of measles. So if you don’t want to get the vaccine for you, do it for your frail grandfather or your infant niece. Heck, do it for that kid sitting next you on the train who could up and die from a disease that might not even phase you. Yes, the vaccine might not work—but uncertain immunity is way better than certain susceptibility. So follow Nike’s advice: just do it.