$244 million to destroy a dummy under ideal conditions. 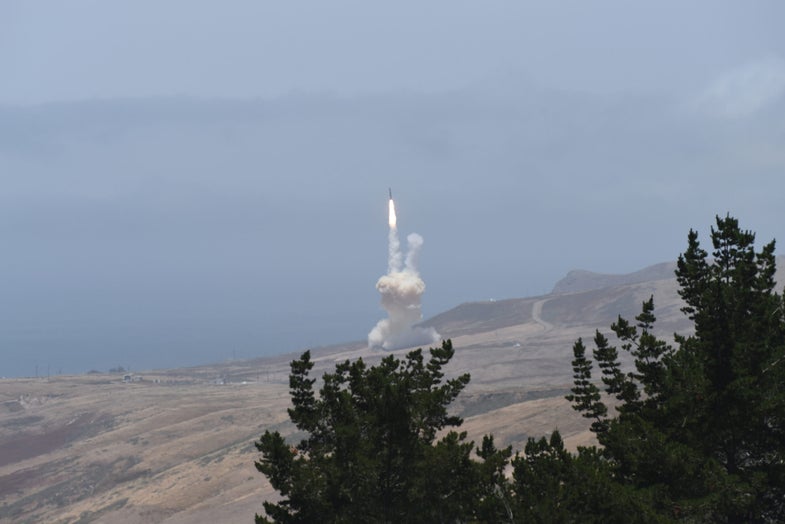 Launching a missile is easy. Hitting another missile with a missile is one of the hardest challenges of modern military engineering, and has been for decades. Today, the Pentagon successfully fired a ballistic missile interceptor at an ICBM-like target, destroying it in space.

It is an impressive achievement, one that comes after billions of dollars spent on the program. It is not a sign that the United States is in any position to deploy a missile defense system that can stop a real ICBM under realistic conditions. That goal is still likely years if not decades away.

The test was run by several groups within the Department of Defense, primarily the Missile Defense Agency and the U.S. Air Force 30th Space Wing. From a test site in the Marshall Islands, the military launched a dummy ICBM-like missile. Other military sensors picked up wth launch, including a special X-band radar likely mounted on a ship in the Pacific Ocean. These sensors passed along information to the Ground-based Midcourse Defense system, or GMD, which is the name for the whole missile defense unit. The GMD system took the tracking information and plotted a way to shoot a missile at the dummy target.

At Vandenberg Air Force Base in California, the Air Force launched a “ground based interceptor,” or a special missile designed to reach and stop ICBMs. In space, the interceptor used an “exo-atmospheric kill vehicle” to crash directly into the dummy target, destroying it. That exo-atmospheric kill vehicle is essentially a flying battering ram, released by the interceptor rocket to forcibly slam into the target, disabling it. The whole test cost $244 million.

“This system is vitally important to the defense of our homeland,” said Navy Vice Admiral Jim Syring, director of the Missile Defense Agency, in a statement released by the Department of Defense, “and this test demonstrates that we have a capable, credible deterrent against a very real threat.” 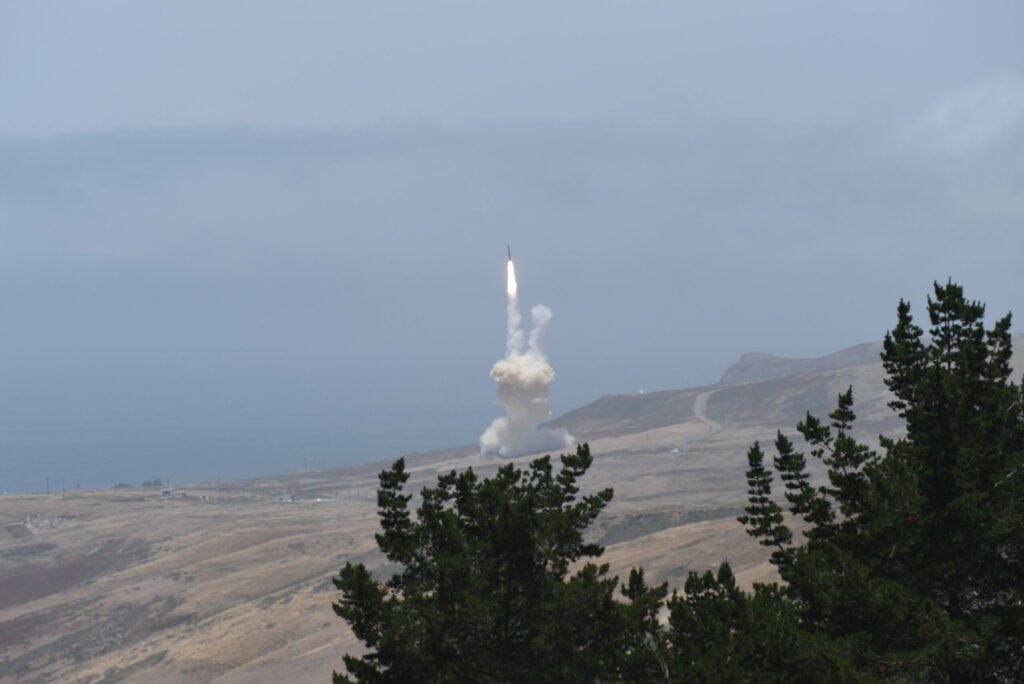 A ballistic missile interceptor is launched from Vandenberg Air Force Base in California.

What is the origin of missile defense?

The first ballistic missiles were used in World War II, with conventional explosives. In the Cold War, nations quickly realized the potential of arming ballistic missiles with nuclear warheads, and then developed such weapons. The longest-range of these weapons are the appropriately named Intercontinental Ballistic Missiles, or ICBMs, and they presented military planners with a terrifying reality: a weapon that could be assembled and launched entirely within one country, and then travel a great distance quickly to destroy a base, town, or city in another country. Thousands of these weapons were built, and decades of elaborate strategic thinking was devoted to making sure nations (primarily the USSR and the United States) deployed weapons in such a way to not actually shoot at each other.

To get around this constant terror, sometimes literally referred to as a balance of terror, researchers started designing weapons that could shoot a missile out of the sky, disabling or detonating it in the least harmful way possible.

“Do we have an operational missile defense system?,” Popular Science asked asked in 1965, rhetorically answering, “Most Americans think so. They’re wrong.” The trick in this answer was that the Nike-X system, deployed and tested on the same Kwajalein Atoll from today’s test, was only operational for that atoll, and was not yet defending anywhere in the continental United States. The other catch is that the Zeus and Sprint missiles used in the Nike-X system were themselves nuclear weapons, designed to blow up in proximity to incoming ICBMs.

Using a nuclear weapon to stop a nuclear weapon was somewhat within a normal idea of war in the 1960s, but the idea has understandably since fallen out of favor. And such tests were banned as part of the 1972 Anti-Ballistic Missile treaty. Instead, modern missile defense attempts to use advanced sensors to detect a missile as soon as it’s a threat, and then direct conventional weapons to intercept and destroy the target. 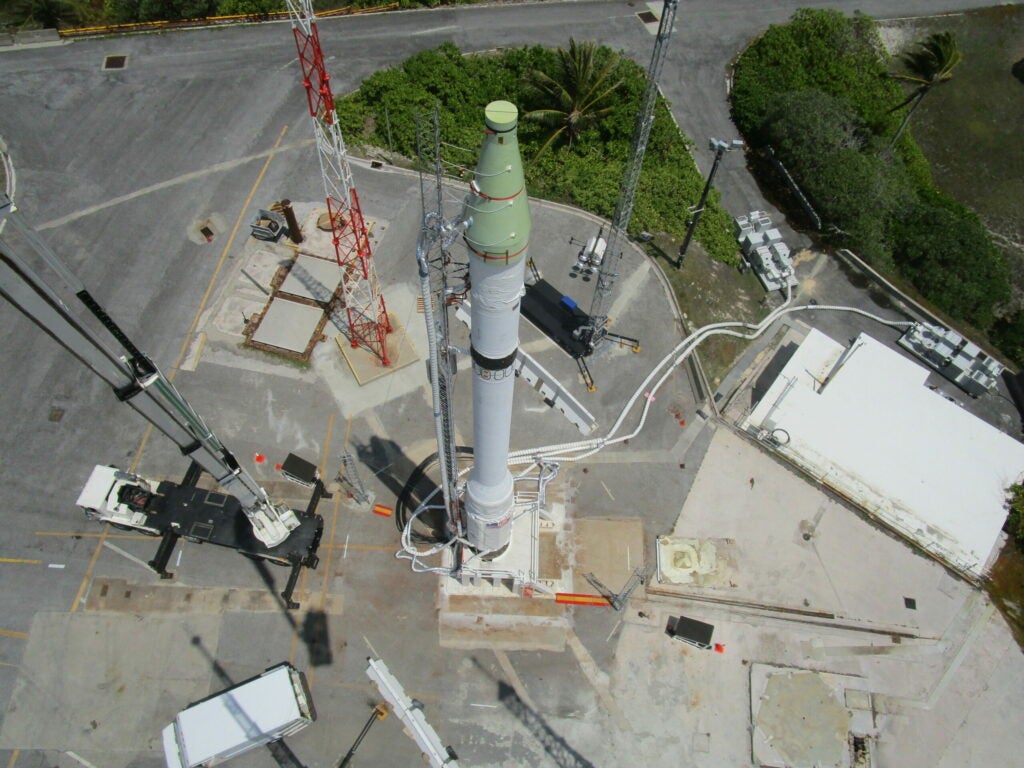 A dummy ICBM is prepared for launch at Reagan Test Site on Kwajalein Atoll in the Marshall Islands.

In 2014, congress reviewed testing of an ex-atmospheric kill vehicle. While Congress ultimately funded further research, it asked that future tests include realistic conditions, which suggests major limitations to what was learned in previous tests.

Other missile defense systems, like the Terminal High Altitude Air Defense, or THAAD, radar and interceptors now deployed in South Korea and elsewhere, had promising early results when tested in the late ’90s, if one overlooks a failure to actually hit the target. The GMD system itself has 36 deployed interceptors, concentrated mostly in Alaska with a few at the Vandenberg base. While the system’s been in place since 2004, it has had at most a success in 3 out of 9 tests. And for all those tests, the intercepting missile had perfect information about the target: when it was launched, what it looked like, how fast it was going, and what trajectory it was traveling.

“GMD has yet to be tested against realistic decoys,” wrote David Willman in the Los Angeles Times, “which would challenge the system’s ability to discern between decoys and nuclear warheads.”

Because the GMD was rushed into deployment in 2004, the United States has spent over a decade with essentially missile defense prototypes in place, making the weapons on hand but not really adequately tested. That’s the worst of both worlds: a false sense of security, and a defense system whose further development may encourage more aggressive action than if the system didn’t exist at all.

Despite the best recommendations of game theorists, the United States has a missile defense in place, which is gradually getting better at doing the task it was assigned. Today’s test is a step in that direction, but it would be a mistake to assume that initial reports of a successful test mean the system is now as effective as it would need to be in the face of a real attack.

And a real attack will be far more complex than today’s test. As long as strategists have contemplated missile defense, there have been just as many planners and researchers figuring out how to evade missile defense. The answers are mostly known, and have been for decades: missiles that deploy decoys could fool interceptors, and unusual trajectories and launch sites could best interceptors trained on known flight patterns. And then there is the issue of volume: every interceptor that misses is potentially another city devastated, so the more missiles an attacker fires, the likelier it is some of those missiles will get through.

To counter that, interceptors have to not only be accurate every time, they have to become cheap enough to field en masse. Otherwise, instead of deterring an attack, missile defense may simply invite a larger nuclear salvo.