A hypersonic projectile travels at least five times the speed of sound. Here's what we know about the recent test. 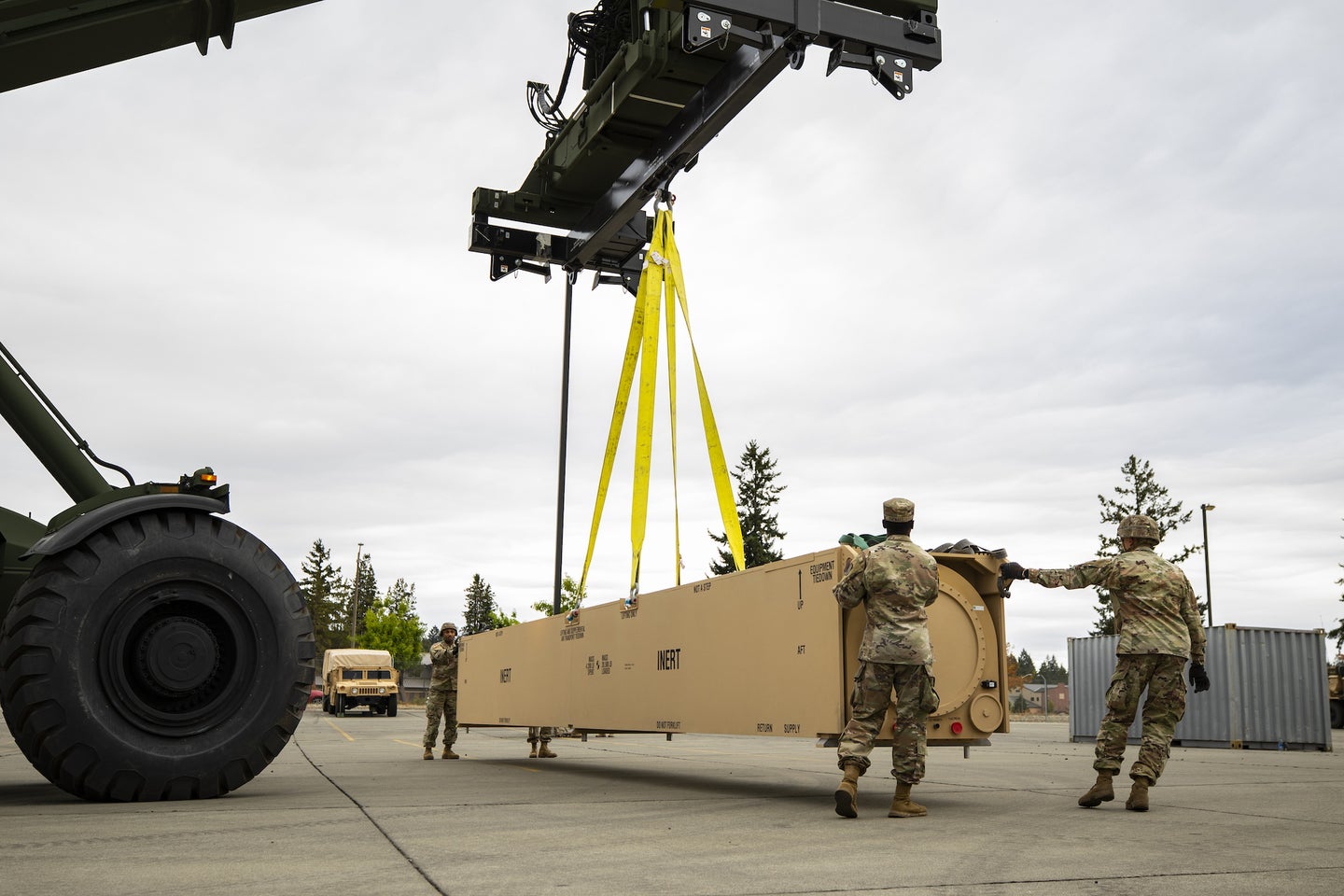 This prototype hypersonic hardware is pictured in September, 2021, at Joint Base Lewis-McChord in Washington. It represents a different type of hypersonic system than what DARPA tested. US Army / Karleshia Gater
SHARE

DARPA recently tested a hypersonic missile, but did not say anything about the event until today. The test occurred in March, according to CNN, and followed one of a similar missile in September. It fits into DARPA’s overall goal of preparing the defense industry to make the weapons needed in future wars. What kept the March test quiet, though, was a concern about how it would be interpreted in light of Russia’s war against Ukraine.

Defense News reports that the Pentagon “chose not to announce the test of the Hypersonic Air-breathing Weapon Concept, or HAWC, for about two weeks to avoid inflaming already-delicate tensions with Russia.”

A hypersonic weapon is any projectile that travels at least five times the speed of sound.

Delaying the announcement of the test allowed the administration to avoid an unfortunate parallel with Russia’s claimed use of a hypersonic weapon in war. On March 19, the Russian Ministry of Defense said it fired a Kinzhal hypersonic missile at a warehouse deep in Ukrainian territory. Later, open-source investigation of satellite images, cross-referenced with video released by the Ministry, show a building hit in Eastern Ukraine instead, and not in Delyatyn base, in western Ukraine, where Russia had said it landed.

That Russia claimed the use of a hypersonic weapon, regardless of whether or not it did, was likely enough to delay the announcement of the latest DARPA test. Had the test been announced immediately after the Russian claim, it could have been interpreted as a direct response to it, a way for the US to signal its pre-planned actions were instead direct commentary on Russian aggression.

Instead, the delayed announcement (but not delayed test) allowed the Biden administration to proceed as planned with the weapon development, without trying to make it part of an information war with Russia. Part of the reason the Biden administration has been cautious around weapons announcements is that, while the US and Russia are not at war, a war in Europe risks spilling over into a country that’s part of the NATO defensive military alliance, which could lead to an exchange of nuclear weapons.

Relatedly, on March 2, shortly after the announcement that Russia had raised the alert level of its nuclear forces, the Department of Defense announced it was postponing a planned test of a Minuteman III ICBM. This delay was in “an effort to demonstrate that we have no intention of engaging in any actions that can be misunderstood or misconstrued,” said Pentagon Press Secretary John Kirby.

In its April 5 announcement, DARPA declared that the tested HAWC missile was released by another aircraft; it was a B-52, according to Defense News and CNN. The missile was then powered by a scramjet, or a “supersonic combustion ramjet.” That’s an engine that compresses incoming air, mixes with its fuel, and then ignites the airflow mixture. Using that scramjet, this HAWC was able to cruise at Mach 5, or over 5 times the speed of sound, travel over 345 miles, and reach altitudes above 65,000 feet.

Other missiles like ICBMs can also travel at hypersonic speeds, but what sets the HAWC apart is that it can maneuver in flight at high speeds, making it harder for anti-missile defenses to stop it. Thanks to the speed at which HAWC travels, it can have a devastating impact when it hits a target, like a ship or a building, without needing any explosive payload, as the energy of its accelerated body is enough for a powerful punch.

While hypersonic weapons do not need to carry conventional explosives, they can carry nuclear warheads, potentially making them a new and different kind of nuclear delivery system, with big implications for the field of nuclear deterrence.

Why do countries want hypersonics?

Hypersonic missiles, like the two different versions tested by DARPA, are designed to overcome defenses, and change the calculus between two countries around war. Hypersonics primarily overcome missile defenses designed to stop existing weapons, like slower cruise missiles or faster ballistic missiles on more-fixed trajectories. Designing a weapon that can bypass defenses also creates an incentive for threatened countries to adopt new defenses.

“Any government faced with the possibility that hypersonic missiles would be employed against it—particularly in a decapitating attack—would plan countermeasures, many of which could be destabilizing,” reads a RAND study from 2017. Because hypersonics are developed by nuclear-armed countries, they could change the calculus around nuclear first strikes.

“An obvious measure would be a launch-on-warning posture—a hair-trigger tactic that would increase crisis instability,” the RAND study continues, suggesting countries may shorten nuclear launch times to ensure that the country can still retaliate against a first strike by hypersonic weapons. “Or the target nation could adopt a policy of preemption during a crisis—guaranteeing highly destructive military action.”

Nuclear deterrence is a delicate affair. It relies on both countries trying to deter each other having similar understanding of weapon capabilities, expectations of doctrine, and similar perceptions of threat.

It is the perception around why a country would pursue a hypersonic missile program, more than the programs itself, that can “lead to misperception of intentions that appear to be aggressive and hostile, which in turn has the significant potential to destabilize the deterrence status quo,” writes Major Jeffrey Hill in a publication from the United States Air Force Center for Strategic Deterrence Studies.

By postponing the announcement of the test, but not the test itself, the Biden administration is having its hypersonic weapons program while attempting to keep its deterrence, too.