Its aim is to be a defensive tool against incoming threats, from missiles to drones. 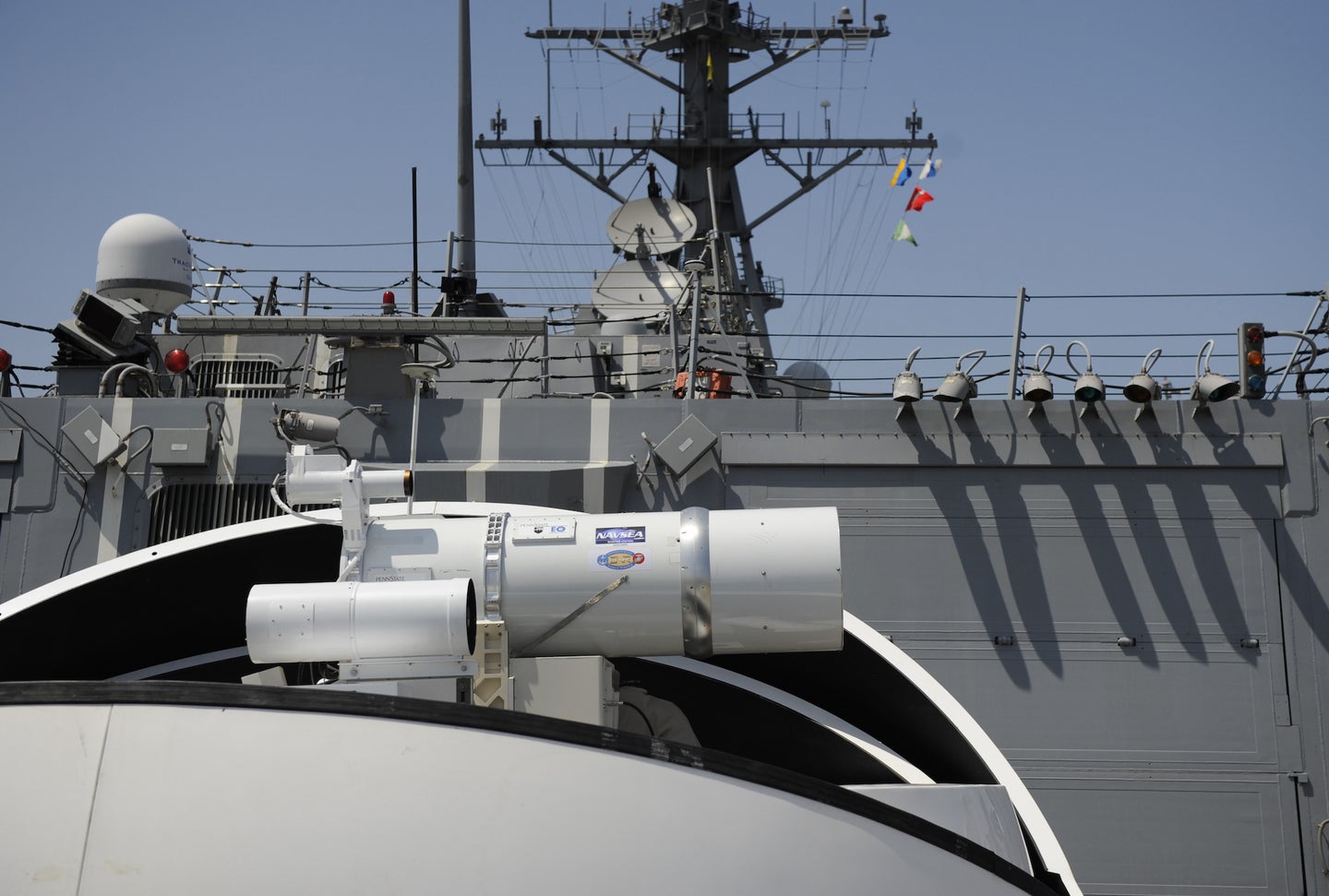 A Laser Weapon System on a Naval ship in 2012. John Williams / US Navy
SHARE

The military is commissioning its most powerful laser weapon to date. Announced October 25, the Army is asking for a 300 kiloWatt solid state laser and has awarded a contract to General Atomics to deliver it. If successfully developed, it will be powerful enough to destroy a range of objects, from small drones to flying missiles.

Formally called the “Distributed Gain High Energy Laser Weapon System,” or DGHELWS, the weapon is billed as a protective tool, a kind of defense between soldiers in the field and weapons that mean them harm. By focusing a powerful beam of light steadily on an object, the laser can burn through it, given enough time and enough power.

The contract is to deliver a powerful, compact prototype of this laser weapon. General Atomics will build the laser, and defense giant Boeing will incorporate targeting and tracking tools and software, which allow the laser to find and hold focus on a moving target. This is crucial to preventing the laser from losing focus on a target before that target is destroyed.

Many of the lasers already developed and tested by militaries are focused on the smaller end of this threat spectrum. The Laser Weapon System, which the US Navy deployed in the Persian Gulf in 2014, reportedly had a beam strength of 30 kW. In demonstrations it used that beam power to burn through the metal exterior of rockets, the wings of small flying drones, and the engine casing on a little boat. (And in 2020, the Navy demonstrated a 150 kW laser weapon on a ship).

Laser weapons, more than any other kind of directed energy weapon, come with big promises and lofty expectations. Lasers have up-front development costs and require substantial electrical power to become a weapon. Once those two hurdles have been cleared, a laser potentially offers an extremely favorable cost-per-shot ratio, with the intense beams of light burning through more expensive targets.

Drones, loitering munitions, and missiles can be shot down in a variety of ways, but the cheaper these weapons get, the harder it is to counter them effectively with a similarly cheap missile interceptor. Interception is the harder part of this challenge, as a countering weapon needs to both track the target and accelerate to destroy that incoming target. Those challenges translate to on-board sensing and steering equipment, which is blown up when used. CRAM technologies (for Counter Rocket Artillery Mortar), like the Phalanx weapon system deployed since the 1980s, pair fast-firing guns with radar sensors as a cheaper alternative to intercepting with missiles. Lasers could bend that cost calculus down even further.

Unlike counter-missile missiles or guns, a laser weapon requires no spare space for ammunition storage. That’s important at sea, where room is at a premium, and it also means land-based lasers can be brought to bear provided there’s a flatbed truck available to carry it around.

The 300kw laser can be powered by batteries or connection to a power grid. The former allows the weapon to be deployed a lot more freely, though the batteries will need to be recharged eventually.

Increased power on the beam of the laser changes what kind of targets it can be effective against. Early laser demonstrations focused on small targets which could be incapacitated in several seconds. With a powerful enough beam, finding and touching the target may be potent enough.

“The higher power is enabling for some targets,” says Perry. “Specifically, it enables lethal fluence to be accumulated at the required range. For softer targets that can be destroyed with a lower power laser, the extra power can be used to increase the engagement range and/or dwell time.”(Fluence is the technical term for energy delivered to a specific area, in this case by a laser beam).

In other words, there are some targets, like cruise missiles or crewed planes, that lasers need to be this powerful to destroy them at all. For other targets, like smaller drones or artillery rounds, a powerful laser means it can destroy them at greater distances. “Dwell” is “time spent on the target,” which for a laser is a crucial factor in how quickly it can disable or destroy what it’s hitting.

The Army has aimed at adding laser weapons to its force for the last five years, with a promise of delivery in the 2020s. The DGHELWS, or whatever better-named system follows its successful tests, is a major step towards fielding laser protection.