Israel could supplement its Iron Dome with a ‘laser wall’

The system actually would consist of lasers, deployed on aircraft, focused on defending against enemy drones. 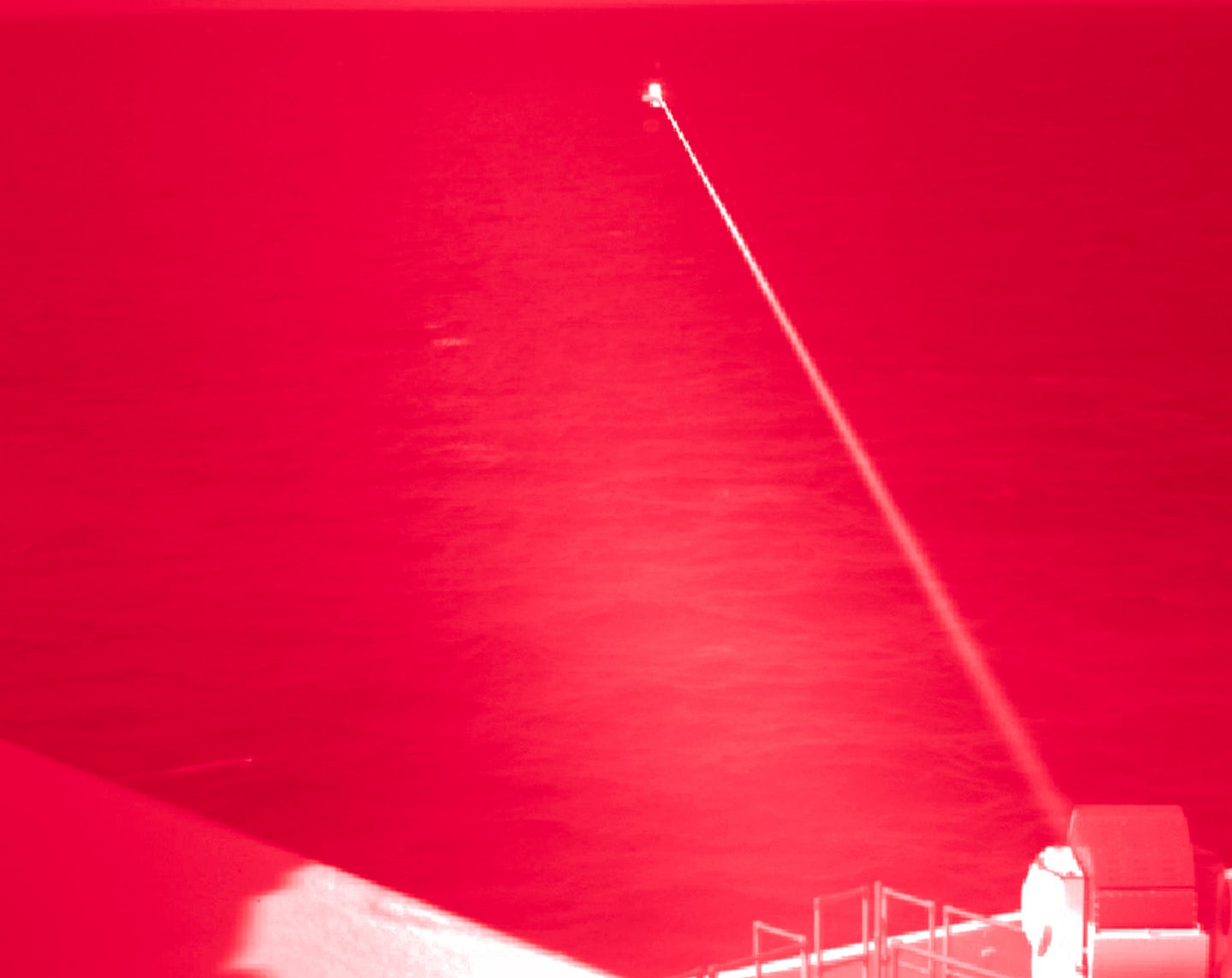 A demonstration of an American laser system in Dec. 2021. US Navy / Devin Kates
SHARE

To destroy drones in flight, Israel plans to deploy airborne lasers. A new system, which will mount high-powered laser weapons on airplanes, is part of a broader technological effort to create defensive systems so comprehensive that they can mitigate a range of low-cost weapons launched against the country, without costing a fortune to use.

In a speech at a think tank in Tel Aviv on February 1, Israel’s Prime Minister Naftali Bennett announced plans to defend the country with a “laser wall.”

“This will allow us, in the medium- to long-term, to surround Israel with a laser wall that will defend us from missiles, rockets, UAVs and other threats that will essentially take away the strongest card our enemies have against us,” Bennett said, according to the Jerusalem Post.

Bennett’s plans call for this system to be ready and in use by 2023.

Last summer, Israeli defense giant Elbit released a video showing a laser system mounted on a small plane destroying a drone flying over a body of water. The plane was a modified Cessna Grand Caravan, a versatile commercial aircraft that is often used as a transport for small groups of people. As seen in the video, the laser is operated by an onboard crew of three.

The operators found the drone, and then focused the laser on a small section of the drone’s hull. After a few seconds, the laser burned through the casing and inner workings of the drone, and the robot crashed apart above the sea. The premise, as outlined by Oren Sabag of Elbit Systems, is to destroy incoming threats before they reach population centers.

Israel’s government has publicly expressed concerns that drones, launched from groups inside Syria and reportedly supplied by Iran, will regularly be used like guided missiles against the country. The Houthis, one of several factions in Yemen’s ongoing civil war, have received foreign-built drones and deployed them against targets in Saudi Arabia and the United Arab Emirates. Low-cost drones offer range and accuracy previously unavailable to insurgents and armed groups without access to airplanes, letting those groups claim retaliatory strikes on builds far from the direct fighting.

In this way, drones can be seen as filling a similar role to the Qasem rockets, a cheap and rudimentary weapon that became a mainstay of attacks against Israel in the 2000s. These rockets, which lack guidance systems, are the primary target of Israel’s defensive Iron Dome system, an extensive array of radars, sensors, and missile batteries used to intercept rockets in flight.

The Iron Dome is effective at reducing the total number of rockets that explode, though like any defensive weapon system it can be overwhelmed by numbers and fail to intercept every attack. It is also expensive, with the dollar cost of each fired interceptor orders of magnitude pricier than the intercepted rocket, to say nothing of the actual development of the system itself.

In the demonstrations of the new system last summer, the laser weapon destroyed drones at a distance of 1 km, or 0.6 miles. The goal is for the system to ultimately have a range of 12 miles, using a 100-kilowatt laser to quickly burn through any drone, missile, or rocket it detects. Nations like the United States have similarly invested in laser systems mounted on ships to protect vessels at sea from attack.

Defending an entire nation from incoming drones, rockets, and missiles is a much steeper task than putting a defensive system on a single ship. While “laser wall” implies fixed and permanent defenses, this system would be made up of flights of aircraft equipped with lasers. The system is being promised on a cost analysis that holds each laser usage as cheaper than the drone, rocket, or missile that the laser destroys. That may be possible, but it’s also generally expensive to keep aircraft constantly patrolling.

[Related: The US Navy is testing out drone-zapping laser weapons]

What systems like the laser interceptor will do, and what the Iron Dome presently allows, is a way to mitigate many of the kinds of attacks that could be made against the country. Weapons, while largely seen from acquisition to use as apolitical tools, exist in a specific context, and change how leaders and governments understand the risk of certain actions.

Like any defensive weapon, the “laser wall” cannot alone alter the politics that made its development prudent, nor can it promise indefinite security. Offense and defense is a kind of dialogue, and over time attackers can engineer or plan attacks that bypass known defenses. And in a larger context, on the same day that Bennett announced the “laser wall,” international human rights organization Amnesty International published a report declaring that “Israeli authorities must be held accountable for committing the crime of apartheid against Palestinians.”

As a technology that can mitigate the risks of asymmetric attack, the “laser wall” appears to have a basis in sound engineering and practical testing. If deployment follows, it will likely add a deeper layer of interception in the face of future attacks, and in so doing, will likely save some lives of people who would otherwise die in rocket or drone launches.

Watch Elbit’s video of the interception below: