It’s tough to hit a moving rocket with a moving rocket. Here’s how Israel’s new domestic missile defense system is doing it with unprecedented accuracy. 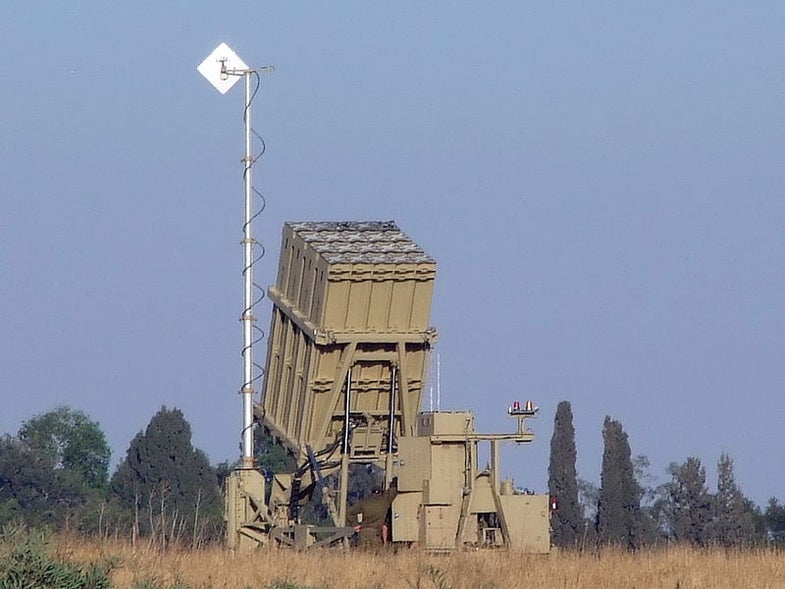 The clash between Israel and Hamas-backed fighters in the Gaza Strip continued over the weekend and into today, with the death toll in Gaza inching toward 100 (there were 91 recorded deaths as of Monday morning). But amid the troubling images and stark numbers trickling out of the conflict there, one set of numbers represents a rare bright spot: the number of Hamas rockets that Israel’s “Iron Dome” missile-defense shield is knocking out the sky. Scattered reports from various Israeli officials and news media suggest that Iron Dome has intercepted more than 300 rockets fired at Israeli population centers since hostilities began, or between 80 and 90 percent of rockets targeted.

As missile defense goes, these success rates are more or less unprecedented. One of the five Iron Dome batteries deployed to southern Israel reportedly intercepted a full 100 percent of incoming rockets fired during one Hamas salvo. The overall success rate has been described by various officials at anywhere between 75 and 95 percent. Calling it a conservative 85 percent success rate still puts Iron Dome in a class by itself where missile defense systems are concerned. Hitting a screaming rocket with a screaming rocket is, after all, really, really difficult.

When many people think of missile interceptors, they think of the American-made MIM-104 Patriot missile interceptor system and its much-heralded successes during the 1991 Gulf War, during which then-President George H. W. Bush called the Patriot missile interceptor overwhelmingly successful, using numbers that described it as something like 97 percent effective. But we’ve since learned that those success rates were really much lower–mostly after changing the parameters of what defines a success (later analysis showed that the Iraqi Scuds that the Patriots were “intercepting” were simply failing in flight far more often than the Patriots were destroying them). The dubious success of the Patriot system has since served as a lingering reminder–in-flight missile-defense is a challenge that even the most technologically advanced military in the world hasn’t been able to overcome.

So how is Israel pulling it off with such unmitigated success? Intercepting Soviet-designed Scuds and the much smaller Grad and Qassam rockets largely fielded by Hamas are in some ways very different, but the primary problem is fairly universal. Any ballistic missile interceptor system needs to meet at minimum three requirements: it must have a way to detect and track an incoming projectile, it must be able to use that tracking data to predict the future course of that projectile, and it must be able to accurately be able to get in the way of that projectile. In Israel’s case there’s a further requirement. Because most of Hamas’ arsenal has a range of just two to 20 miles, it has to do all of this very, very quickly.

Iron Dome satisfies all three of these requirements remarkably well. It starts with radar stations that detect a missile or artillery shell moving toward Israeli airspace. Trajectory data on the missile are beamed to a battle control system, which quickly assembles a ballistic profile of the missle–where it is now, how fast it is moving, and where it is going to be. The system and its overseers then make a decision; Is this projectile a threat to a populated area, or is it destined for a rural field or some place where people are not likely to be harmed. Roughly two-thirds of the rockets fired thus far from Gaza have fallen into the latter category, and Iron Dome lets those rockets fall harmlessly.

But if an incoming rocket is perceived to be a threat, that radar data is quickly transferred to a fixed or mobile missile battery–each of which packs 20 radar-guided Tamir interceptor missiles. Those missiles have thus far proven adequately effective in tracking down Hamas missiles in flight and destroying them before they can reach their targets. Moreover, they seem to have grown even more effective since the system was first deployed last year. In three separate (but much smaller) engagements last year, Iron Dome experienced success rates ranging from 80 percent in a short April conflict to a low of roughly 30 percent last October, when it stopped just three of nine incoming missiles. An inquiry into that October event found that a radar failure caused some of the interceptors to deviate from their marks. That, quite apparently, has been fixed.

Another driver of Iron Dome’s success could be as simple as Moore’s Law. It takes a lot of raw computing power to rapidly build a ballistic profile of a fast-incoming projectile, make a series of quick decisions concerning potential lethality, and launch a countermeasure capable of intercepting said projectile in-flight. One reason Iron Dome is showing a much more robust capability than the Patriot system did in the early 1990s could simply be the fact that its battle control hardware and software are several generations more advanced than those early interceptor systems.

Whatever the reason, Iron Dome is working, and there are reasons to celebrate this technological achievement–lives saved, property spared, infrastructure preserved, continuity of daily life unchanged–and reasons to temper our optimism. As Cold War missile ideology demonstrated, a defensive countermeasure that is perceived as too potent can sometimes make an adversary feel cornered, pushing it toward more extreme measures. As one senior Israeli official has pointed out, Iron Dome must be frustrating Hamas, and without the ability to point to battlefield successes, it cannot declare any kind of political or military victory, nor does it have much to negotiate with. That could prompt Hamas to keep up the fight longer than it might otherwise.