An investment of $100 million in directed-energy weapons includes two new anti-drone lasers, one of which will be mounted on a frigate. 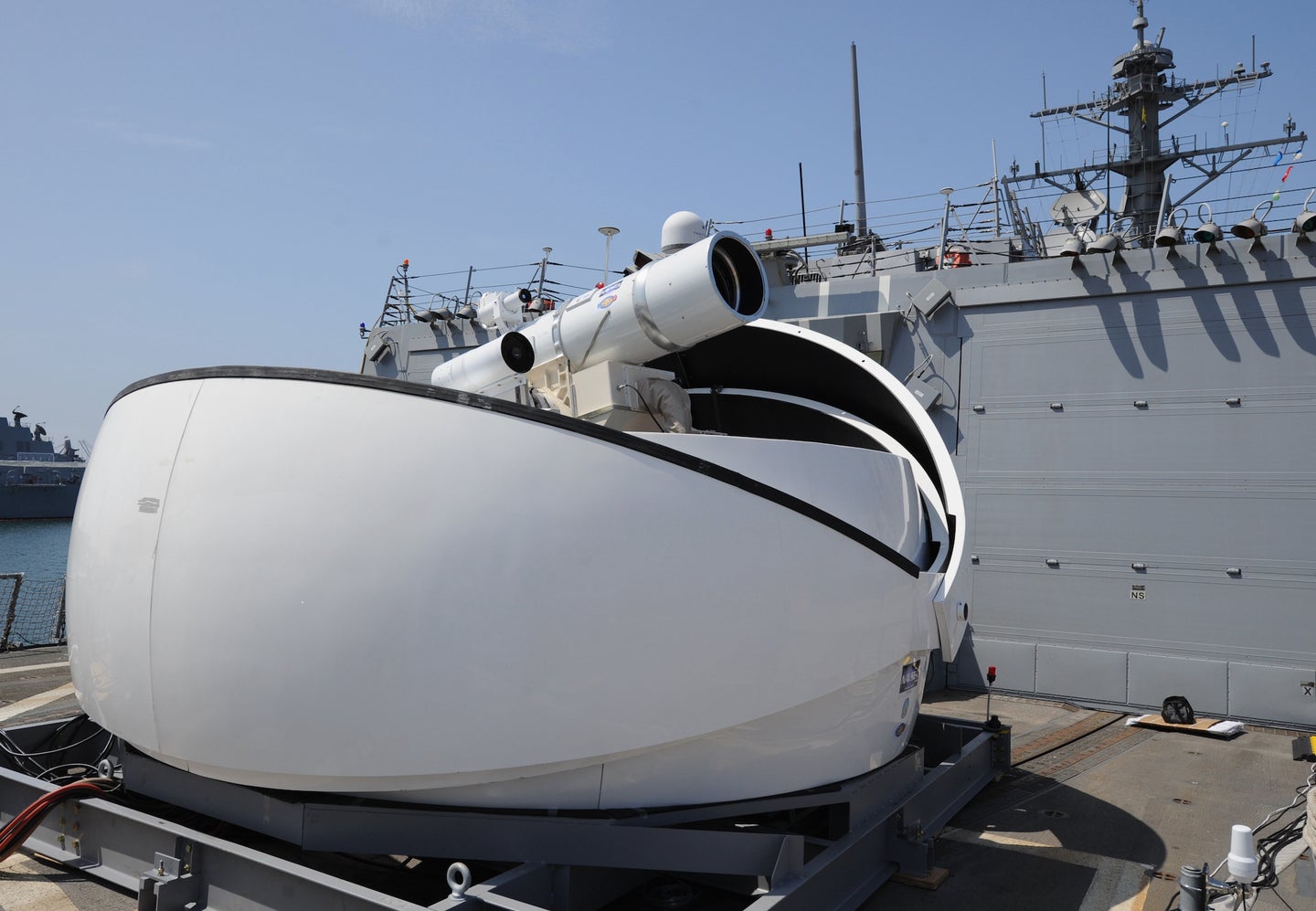 A US laser weapon system in 2012 on a destroyer. John F. Williams / US Navy
SHARE

The United Kingdom is investing roughly $100 million in new directed energy weapons across sea and land. Split into three contracts, and announced September 14 at the Defence and Security Equipment International exhibition in London, two of the direct energy weapons will be lasers that can stop drones, while the third will use radio to detect and track targets. It’s a push for a new kind of weapon that can face a new kind of threat, and do so cost-effectively.

“These technologies have the potential to revolutionise the future battlefield for our Armed Forces, enabling the prosecution of new targets in the land, sea and air domains and allowing commanders to meet mission objectives in new ways,” said Shima Fhima, director of strategic programmes for the Ministry of Defence, in a release.

As a category, “directed energy weapons” includes a range of technologies, all of which utilize a part of the electromagnetic spectrum, and bend it towards military ends for different effects. That’s a broad wording, because the application can include everything from a laser beam of light so intense that it burns through a drone’s wing to just employing a radio signal to detect a helicopter.

What directed energy offers a military commander is a way to reach out into the battlefield and stop an enemy vehicle in its path, without needing to use bullets or missiles. Bullets and missiles have many advantages, and are readily available in a bewildering array of varieties. They are also to some degree finite: one a given weapon has run out of bullets, or a ship has fired its available complement of missiles, then it has to turn to other weapons for answers, or retreat.

[Related: Watch this French laser zap drones out of the sky]

The modern danger, the one to which directed energy weapons are a reaction, is vast swarms of cheap, expendable drones. An attack by fighter jets may involve a dozen or so planes; a drone swarm could contain hundreds if not more aircraft. Scaling up to defeat that with more traditional weapons such as missiles would be expensive and unwieldy, both in terms of weapons and because of finite storage capacity.

Directed energy, at least in theory, offers firepower limited only by the ability of a vessel to store and generate energy. That makes it particularly useful against drones, because every kill can be cheaper than the object it is destroying.

“[These] next-generation technologies could revolutionise the battlefield and reduce the risk of collateral damage,” said the Ministry in a release. “The systems are powered by electricity and operate without ammunition, significantly reducing operating costs, increasing platform endurance and providing unprecedented offensive and defensive flexibility to personnel on the frontline.”

For it’s nearly $100 million investment, the Ministry will receive a laser weapon to test on a Royal Navy Type 23 Frigate starting in 2023. In that role, the laser will be paired with other systems to detect, track, engage, and counter drones. They will likely combat drones by burning through their airframes.

On land, the Ministry will test a laser demonstrator on a vehicle called a Wolfhound. The Wolfhound is a six-wheeled armored machine, with a crew of two and room for 10 passengers, used to carry troops into the action. The laser on the Wolfhound will also be used to counter drones, indicating a future where the threat to troops in battle comes not just from bombs placed along roads but also from cheap attacks launched by air.

The third directed energy device, a radio frequency demonstrator, is not an explicitly destructive tool. It’s designed for use on a support vehicle, or a large cargo transport truck. From the truck, it will “detect and track a variety of air, land, and sea targets,” which suggests that the purpose is less about protecting the cargo truck and instead about turning it into the base for a useful far-reaching sensor.

Directed energy weapons are still very much an emerging technology. The US Navy fielded one on a deployed ship in 2014, and demonstrated that the laser weapon could, in a test setting, knock a small drone out of the sky.

What will be crucial for these UK programs is not just that they demonstrate a viable weapon, but that they also show it can be cost effective for its stated purposes. If a laser is too expensive to field, it’s far better to go with a weapon that can actually be brought into combat instead.