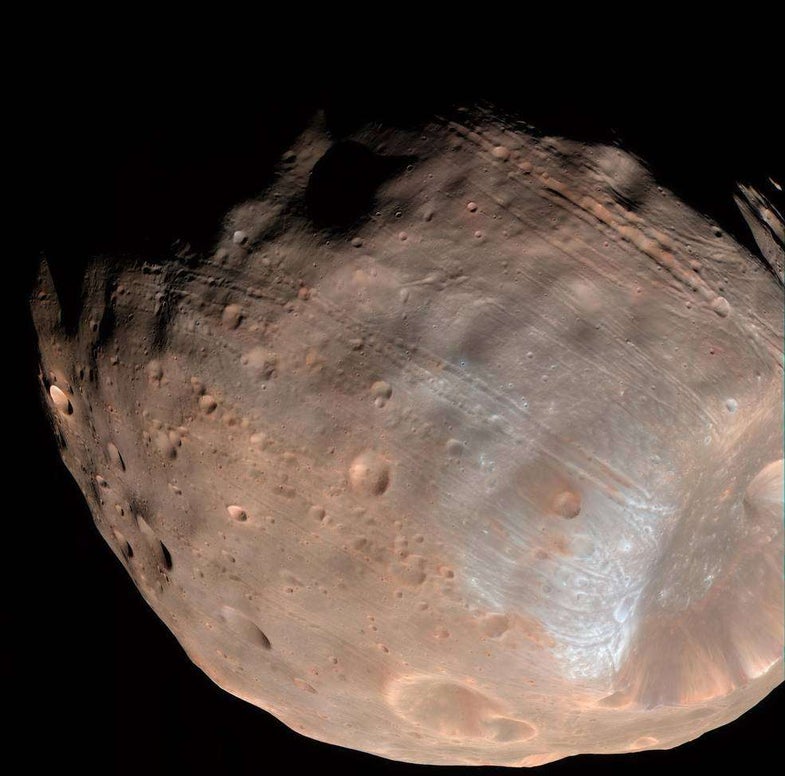 The lines along Mars' moon Phobos may indicate that it is getting pulled apart. NASA/JPL-Caltech/University of Arizona
SHARE

You’d think that something as solid as a moon would be around forever. But Mars’s moon Phobos has an expiration date.

Scientists recently presented a theory that the moon is slowly being pulled apart by Mars’s gravity, and could cease to exist within the next 30-50 million years. The research was presented at the Meeting of the Division of Planetary Sciences of the American Astronomical Society.

The researchers posit that the long linear grooves on the moon’s surface are indications that the moon is slowly coming apart. Previous theories held that the lines were a result of a huge meteorite hitting the surface, or smaller impact craters. Now, these scientists believe that the moon is not solid, but instead a pile of rubble coated with a thick layer of dust that makes it appear solid. In the next several million years, the moon could get pulled apart completely.

“The funny thing about the result is that it shows Phobos has a kind of mildly cohesive outer fabric,” Erik Asphaug, a co-investigator on the study said in a statement. “This makes sense when you think about powdery materials in microgravity, but it’s quite non-intuitive.”

Phobos only orbits about 3,700 miles above the Martian surface, roughly the distance from St. Louis to the Pacific Ocean. That’s closer than any other moon in the solar system, and it’s getting pulled 6 feet closer to the surface every century. For comparison, Earth’s moon, which is solid, is 238,900 miles away.

Of course, the only way to really determine what’s going on with Phobos would be to take a closer look. Russia attempted to send a probe to Phobos in 2011, but the Phobos-Grunt spacecraft never left Earth’s orbit. Japan plans to launch a probe to Phobos around 2022. If all goes well, we might get a better look at the moon well before it meets its ultimate demise.