Earth May Wear An Invisible Fur Coat Made Of Dark Matter 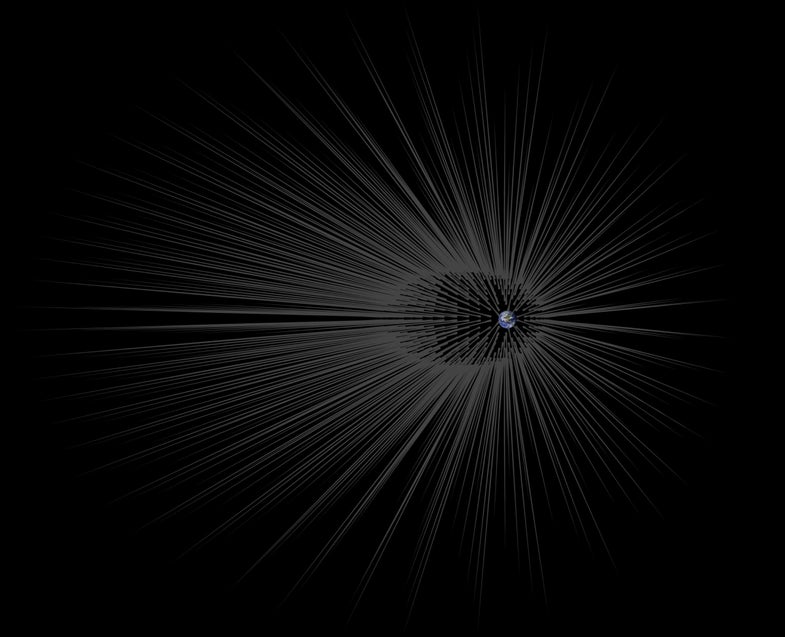 Regular matter–the stuff that makes up everything humans have ever seen or felt–makes up just 5 percent of the universe. The rest is made up of dark matter and dark energy.

Although we’ve never detected dark matter, scientists know that it exists, and there are several theories as to what it’s like. It seems the stuff doesn’t interact with light, but gravity does have an effect on it. Now, in the Astrophysical Journal, one scientist has calculated that a planet’s gravity could give dark matter a hair-like shape.

Simulations done in the 1990s suggested that dark matter moves around us in massive streams, some as large as our solar system. Gary Prézeau, a physicist at NASA’s Jet Propulsion Lab, has calculated what might happen when those streams of particles flow into a planet such as Earth.

Unlike other kinds of matter, the dark matter particles would pass right through Earth unaffected. However, they are affected by Earth’s gravity, which narrows the particle streams into dense filaments. Earth could be coated in these invisible “hairs.”

A planet with more gravity would sport a shorter dark-matter hairstyle.

The “roots” of the hairs are located about 600,000 miles from Earth, or about twice the distance to the Moon. This is where the dark matter particles are densest. The hair “tips” extend outward to about 1,200,000 miles. That’s some pretty long hair.

By comparison, a planet with more gravity would sport a shorter dark matter hairstyle. For example, Jupiter’s greater gravity pulls harder on the dark matter particles, pulling the filaments in closer to the planet. So Jupiter’s roots would begin at approximately 125,000 miles from the planet’s center, and wouldn’t extend as far as Earth’s, Prézeau explained in an email with Popular Science.

The hirsute discovery could be a boon for dark matter researchers, since the particles would be densely clustered in these areas, which might make the particles easier to detect.

“If we could pinpoint the location of the root of these hairs, we could potentially send a probe there and get a bonanza of data about dark matter,” Prézeau said in a press release.