Bust out the bug repellant 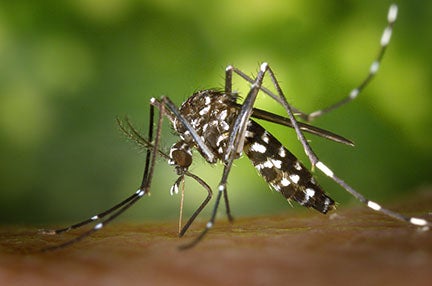 This winter, as occasional cold snaps were outnumbered by weirdly balmy days, we at the PopSci offices had a running theory that come spring time we might be contending with buggy madness—enough mosquitoes to keep us firmly indoors, or at least coated in DEET.

“Whoever bet on bugs made the right choice this year,” said Jim Fredericks, the Chief Entomologist & Vice President of Technical and Regulatory Affairs at the National Pest Management Association. “It probably will be a pretty buggy spring and summer.”

The National Pest Management Association recently released its “bug barometer“, and the predictions are lousy. This spring and summer, most of the continental United States (apart from the Pacific Northwest) will experience an uptick in insect numbers. In most regions, mosquitoes and ticks will emerge earlier and in greater numbers than usual. The southwest doesn’t have to deal with earlier mosquitoes, according to the barometer, but it gets to share in the nation’s bitter, buggy bounty: once the insects do emerge, they’ll be more prolific than usual.

You may have loved this winter’s unusually warm weather, but guess what—so did many insects. The winter warmth (this was the sixth-warmest winter and second-warmest February on record in the United States according to NOAA) was pure buggy bliss. Add a warm, wet spring to the mix, and 2017 is creating the perfect breeding ground for some of our least favorite insect pests, including ticks and mosquitoes.

“Most of the pest insects that we’re dealing with are not migrating,” said Fredericks. “They have to find a way to make it through the winter. When it’s a mild winter they tend to do a little bit better.”

It’s pretty straightforward: when the weather is milder, more insects survive the winter, which means there are more insects around to bite us and breed come springtime. Fredericks and his colleagues made their 2017 predictions based on the winter and spring weather coupled with predictions for the rest of spring and summer.

More adult mosquitoes live through a warm winter, and more of their larvae survive as well. And since mosquitoes breed in standing water, a wet spring gives them plenty of romantic enclaves to keep the population boom going. Moreover, warm weather speeds up a mosquito’s reproductive lifecycle—she can lay more eggs and have them hatch more quickly. If this is making you itchy, it should.

Ticks, which carry Lyme disease disease, are also a concern in much of the northeast. The bacteria Borrelia burgdorferi, which causes Lyme disease, can harm the joints, heart, and even the nervous system if left unchecked.

“If it’s a mild winter, more of the larva and the adult ticks are able to survive through the winter, which just translate to a large population in the spring,” said Fredericks. And a mild winter also means more of the animals that the larvae feed on—small mammals like mice, squirrels, and chipmunks—will survive to get bitten. That sturdy food supply means ticks are more likely to live long enough to encounter (and infect) humans.

The issue isn’t just limited to bugs that, well, bug people. The warming weather is also a problem for agricultural crops.

“In general, with warming winters we are going to see new pests moving north,” said Mike Hoffman, an entomologist and executive director of the Cornell Institute for Climate Smart Solutions at Cornell University. “We have one called the corn earworm in New York which is a pest of sweet corn. Historically it came in on storm fronts late in the summer, but now they find it in traps early in the season, suggesting that that the pests are starting to overwinter because of better conditions.”

The New York State Integrated Pest Management program runs its own version of the bug barometer, only for the corn earworm. It’s prediction is similarly grim. Most of the northeast can expect an unusual number of the pests.

Hoffman is quick to point out that the relationship between warm weather and bugs isn’t straightforward. “If you have lots of snow, that’s going to insulate the conditions, so the insects living in the ground are probably going to survive. But take away that snow and then the cold can penetrate into the soil, and reach those insects that happen to be in the soil, and potentially increase mortality. Also, with warmer conditions there’s more freeze and thaw activity, so water can penetrate and work its way into the soil that are encased in ice, and that’s usually not a good thing, but that can cause higher mortality.”

But still, he said, as the weather warms, “The nutshell version is that yes, there’s going to be more, and they are going to be moving north, and there are records of that happening already. Bark beetle out west expanded over enormous areas because of a combination of warmer winters, and a longer warming season, and is doing tremendous harm.”

What should you do with this information?

“Do a self-assessment of your property of areas that could potentially breed mosquitoes,” said Fredericks. “You should look for anything that is going to hold water. A lot of people hear about flower pots and old tires, and sure, those are places where water can accumulate. But these mosquitoes can breed in the volume of water that can be held inside of bottle cap. It’s time to be mindful debris and trash and children’s toys. Make sure that rain gutters are clear and not clogged.”

In addition, Fredericks recommends wearing any repellant that appears on the CDC approved list, which includes DEET, Piacridin, Oil of lemon eucalyptus (OLE) or (PMD) (which isn’t to be confused with the lemon of eucalyptus essential oil). And while dawn and dusk used to be the primetime biting period for mosquitos, newer species such as aedes aegypti are day biters. As for ticks, donning repellant and covering up—light colored, long-sleeved pants and long shirts—is key in tick areas. That means woods and grassy areas, but even the wild edges of your own property can be perilous when you’re out doing yard work.

That’s the best we can do for now. But there’s no telling whether or not swarms of mosquitoes will become the new norm in summers year to come. Because of climate change, “the conditions are changing,” said Hoffman. “It’s just not the way it used to be. We don’t have the answers of what’s going to happen.”