A guide to ensuring your Diwali festivities keep the Earth happy, too

For some, it’s the most wonderful time of the year. But the popular holiday also puts a burden on the environment. 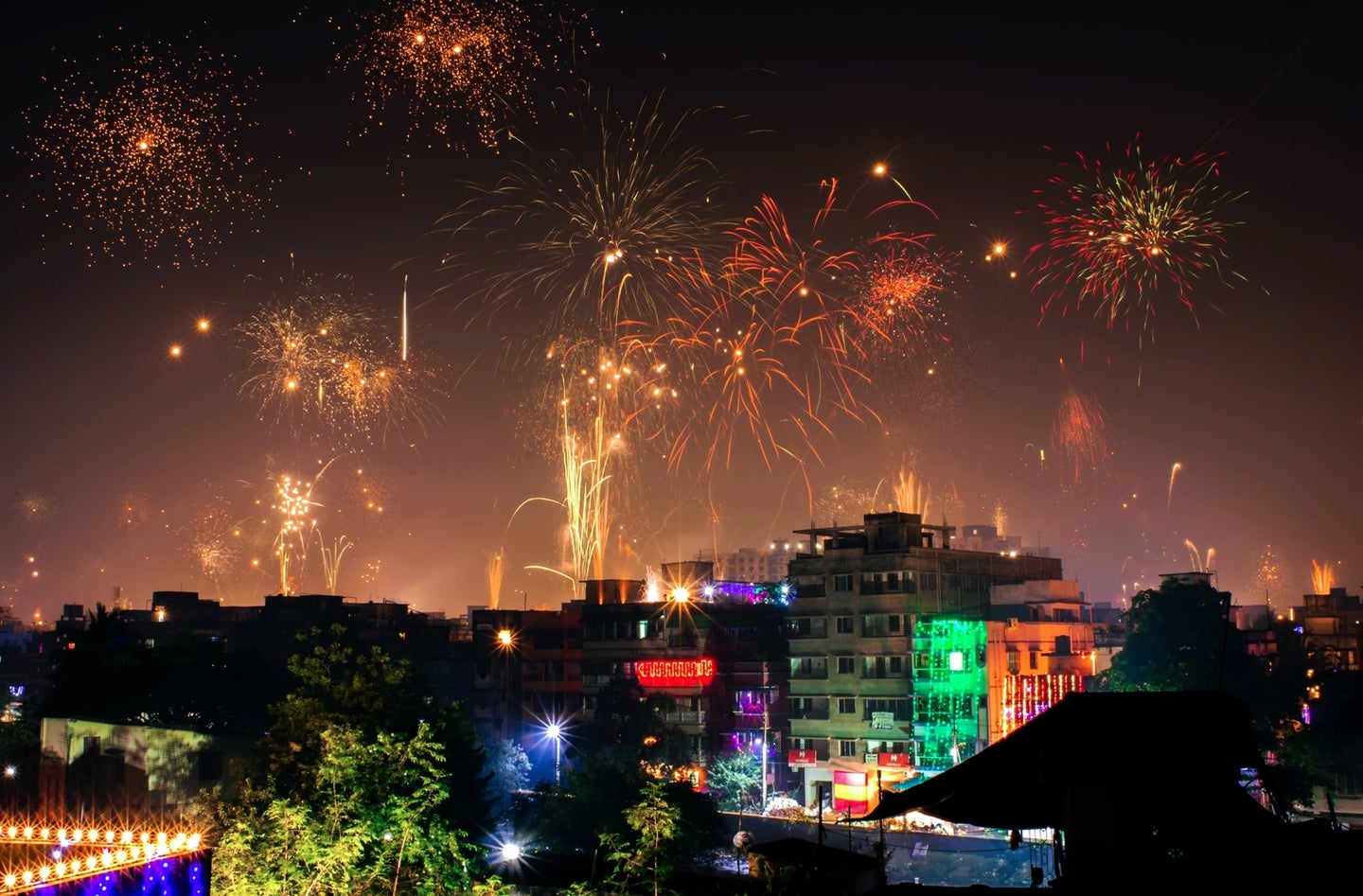 If you think 25 days of Christmas is a marathon, you have to try Diwali. This festival of lights, celebrated by millions of people across Southeast Asia, the West Indies, and other parts of the world, spans the month of October this year (the timing depends on the Hindu lunar calendar).

For some observers, the holiday starts with the nine days of Navaratri, which marks the rise of the goddess Durga as she battles demons and protects the planet from carnage. But the main Diwali dates fall between October 25 and 29, with clay lamps, firecrackers, and fairy bulbs gleaming from temples, markets, and homes. Revelers don their finest clothes, cook up giant feasts, swap gifts, visit temples, and scope out extravagant displays with friends and family. Basically, it’s a more colorful version of Christmas.

But with all that celebration comes plenty of consumption. Fast fashion, single-use dinnerware, fossil fuel-based air and car travel—like most holidays, Diwali has become more about the spirit of spending. The negative environmental impacts, however, run counter to Hinduism, which encourages humans to thrive with nature, not despite it.

Of course, the best way to enjoy traditions and still be eco-conscious is to adopt a few green practices. Start with feasible changes in your own life, then bring your loved ones and community on board. The steps can be as small as swapping out a plastic spoon or as big as curbing fossil fuel use at your place of worship. Take a look.

If connecting with family is the most important part of Diwali for you, try to make sustainable travel your top priority. Planes, cars, and other modes of transportation make up more than a quarter of our greenhouse gas emissions here in the U.S. Unfortunately, carbon-neutral options are next-to-nonexistent for those shuttling between relatives on multiple continents (unless you’re looking to sail the open seas for weeks)—so the next best alternative is to choose an environmental-minded airline.

For domestic flights in the states, JetBlue and Alaska Airlines have received high marks for their carbon offset, waste-reduction, and clean-energy programs on the ground. For international flights that cover Southeast Asia and the Middle East, those honors go to Emirates and KLM Royal Dutch Airlines. In-country travelers in India should scope out SpiceJet or the national railway system, which connects 29 states and offers more sightseeing perks than any plane.

You might also consider buying credits to mitigate carbon emissions elsewhere to cover those released during your trip. There are plenty of options, and you can make your purchase through your airline or a nonprofit that manages multiple green initiatives. Doing so should only set you back a few dollars.

It wouldn’t be a festival of lights without the golden glow that lasts all holiday season. In fact, Diwali gets its name from the decorative lamps, or “diyas,” used to attract the goddess Lakshmi and the good will she brings. Traditionally, the beacons are made of clay and butter, but many modern versions run on coin batteries.

The lamps themselves don’t have a big environmental footprint—unless they’re disposed of incorrectly. Hindu rituals often end with offerings along rivers and water bodies, which may, in turn, pollute drinking sources and wildlife habitats. Aminta Kilawan-Narine, co-founder of the Hindu-activism group Sadhana, has seen this first-hand during cleanups around New York’s Jamaica Bay. “People think because diyas are made of clay, it’s okay to leave them outdoors,” she says. “But they take longer to decompose than we think. And as they break into sharp pieces, they can hurt the animals in the refuge.”

When hosting an outdoor ceremony or celebration, Kilawan-Narine suggests using more natural materials like flowers. Or, “just make an offering in your heart,” she says. LED fairy lights, meanwhile, are an efficient, reusable choice for gatherings at home. For extra oomph, hosts can hand out sparklers instead of noisy, chemical-laden firecrackers.

Think about food (or the stuff it comes on)

If you’re cooking for a dozen-plus people, chances are you won’t want to be doing the dishes after. Single-use utensils make life easier, but they also create tons of landfill waste. “Serving food to the community is an Earth-honoring tradition,” Kilawan-Narine says, “but it irks me when I see it being given out on [plastic foam].”

She’s got a point. Plastic foam is one of the least biodegradable materials, with a lifespan of up to 500 years. Clear plastic plates and cups are slightly better, but still bad, followed by paper, which takes a few decades to decay. Compostable products can break down in two months or less, but only when placed in an actual compost pile.

One old-school method to try is naturally sourced banana leaves. They’re sturdy enough to hold wet dishes like fish and vegetable curries, and big enough to serve multiple courses on. Some Asian countries are even subbing them in for plastic packaging at supermarkets and restaurants. You can pick them up by the pound online or at international groceries.

And, although it sounds messy, you can ask guests to eat with their hands. It’s the norm in most Diwali-celebrating nations—just be sure to have a few sets of silverware to accommodate individuals with disabilities (and germaphobes).

In the end, the point of making mindful lifestyle changes is to make sure they have an effect that lasts. If you’re willing to carry your sustainability campaign beyond the Diwali season, the Alliance of Religions and Conservation has a hefty green guide that you can take to your temple or local cultural center. It includes case studies and tips on how to build a rainwater-collection system, donate surplus food, plant an organic garden, work with an energy auditor, and make the leap to solar or wind power. As more institutions in the U.S. and overseas make these upgrades, it’s easier to ensure the wellbeing of the planet we’re celebrating through this festival of lights.