Video Gallery: The Most Amazing Movies of the Minuscule World

The winners of the Nikon Small World microvideography contest 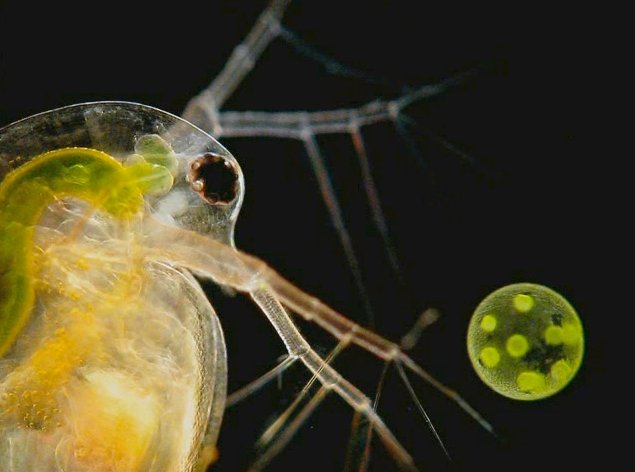 Every year we’re enthralled by the smallest things among us, as scientists capture stunningly beautiful and bizarre images under the microscope. For the first time, the people who bring us the annual Small World Microphotography Competition have caught the world of the tiny on tape.

Behold award-winning videos of the microscopic world, from the vasculature of a chicken egg to a water flea playing with algae. Like the still version of the competition, the movies were judged on whether they were visually outstanding as well as their ability to depict the intersection of science and art, according to Nikon. Some of the videos are scientific breakthroughs in their own right — we told you about one of the honorable mentions, a live-action video of a monkey cell, when it was first published last spring.

The videos feature Small World perennial favorites like zebrafish brains, fruit fly larvae and Arabidopsis thaliana plants, but seeing these things in motion lends them a whole different perspective. You can actually see the movement of tiny cell factories inside nerve cells in a fish brain, and watch the bulbous growth of a new root emerging from a plant’s primary root. Here is a collection of honorable mentions and the top three winners.

First Place
This video was the first time Oxford-based pathologist Anna Franz used this technique for injecting ink into a chick embryo. She cut a window into an egg to expose the 72-hour-old embryo and injected ink into its artery under a 3-D microscope to visualize the vascular system. “This movie not only demonstrates the power of the heart and the complexity of vasculature of the chick embryo, but also reflects the beauty of nature’s design,” Franz said.
Technique: Reflected light microscopy
Magnification: 10x

Second Place
Dr. Dominic Paquet of the German Centre for Neurodegenerative Diseases captured this time-lapse movie of mitochondria transport in the nerve cells of transgenic zebrafish. The cell membranes are green and the mitochondria are labeled in blue.
Technique: Widefield fluorescence
Magnification: 40x objective

Third Place
Dr. Ralf Wagner, a chemist in Germany, captured this video of a Daphnia, or water flea, playing with a volvox, a type of green algae. He found the specimen in his garden pond, according to Nikon. It doesn’t really reflect deep science so much as an extraordinary view of nature — the daphnia is interacting with its environment, not something you can see up close very often. Wagner said he hopes by reminding viewers how much fun science can be, he might inspire others to take up its study.
Technique: Darkfield
Magnification: 50x

Honorable Mentions
Another 11 videos were awarded honorable mentions, from a bustling ant colony to plant root growth in action.

The Maw
James Nicholson of the Coral Collaborative Research Facility in Charleston, S.C., recorded this stony coral. Visible inside the mouth are the mesenteries, structures involved in digestion and reproduction; the unique color pattern about the oral area is the result of tissue pigmentation, a response to an unidentified stressor. Maybe the stress of being under the microscope.
Technique: Epifluorescence with 430 nanometer excitation showing natural fluorescence in live specimen
Magnification: 5x

The Rotifer and the Worm
Craig Smith, a photographer in Fresno, Calif., captured two videos that received honorable mentions. The first shows a microscopic aquatic rotifer, with its corona extending and retracting during feeding. The second shows asexual budding in a worm, Aeolosoma Hemprichi, with the new worm attached to the posterior end of the parent.
Technique (both videos): Darkfield
Magnification: 400x

Monkey Cells in Real Time
We told you about this video, a major breakthrough in cellular imaging, when it was first published last spring. Researchers led by Liang Gao at the Howard Hughes Medical Institute used a new technique to capture this image of an African green monkey kidney cell. The video shows the cell membrane ruffling and internal vacuoles inside the living cell.
Technique: Two photon Bessel beam plane illumination microscopy
Magnification: 56x

How Do Ellipsoid Eggs Form?
Saori Haigo of the University of California – San Francisco wanted to investigate how ellipsoid eggs, like the types laid by birds and some insects, form during development. Haigo dissected developing eggs out of the ovaries of fruit flies and watched how they behaved outside the body. It turns out that developing eggs spin around the long axis. The green fluorescence highlights the surface of the cells, and the red marks the cell nuclei.
Technique: Live cell imaging; a 3-hour time lapse at five minute intervals
Magnification: 400X

Budded Yeast Under Attack
This video captures amoebas ingesting brewer’s yeast. They are expressing a red fluorescent protein to label actin filaments, and a green protein to label what’s called the phagocytic cup — the method by which the amoeba ingests the yeast cell. We will let author Margaret Clarke of the Oklahoma Medical Research Foundation explain further: A phagocytic cup often pauses at or returns to the concave curvature at the neck of a budded yeast, and actin [a protein] accumulates there in an attempt to seal the cup. An unsuccessful attempt may end in retraction of the cup and release of the particle, or the cell may eventually resume extension of the cup and engulf the entire particle. Those two outcomes are shown here.
Technique: Laser scanning confocal microscopy. A time series was collected in a single focal plane, with images acquired at 4-second intervals.
Magnification: 33 microns x 26 microns