NASA Is Launching Microsoft’s Hologram Technology To The Space Station 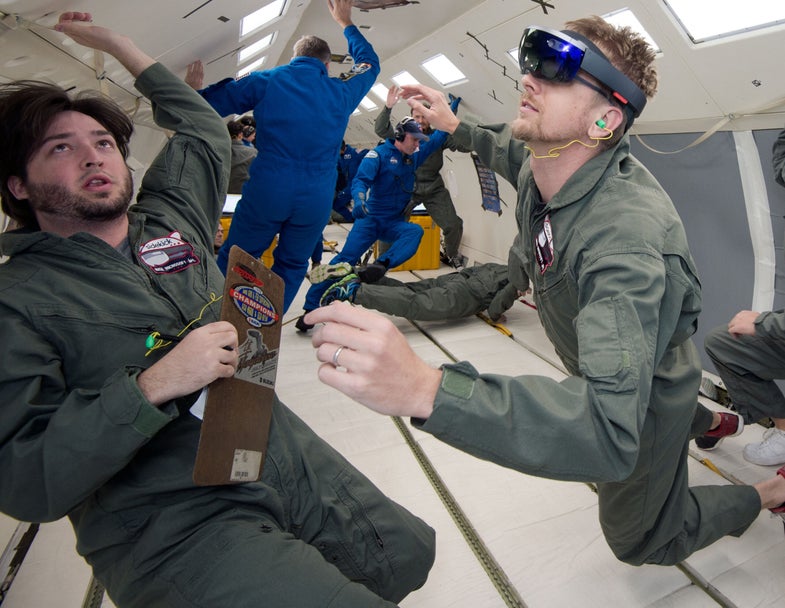 One of Microsoft’s most ambitious projects of the last few decades is HoloLens, a prototype headset that displays holograms over the real world as you look around. Also known as augmented reality, the technology has so far been used mostly for entertainment purposes, putting Minecraft on your tabletop, for example. But now Microsoft is teaming up with NASA to take HoloLens much further than it’s ever gone before: outer space, to be exact. NASA and Microsoft have already been testing HoloLens in weightless environments simulated on a plane:

As announced by NASA today, a pair of HoloLens headsets will be flown to the International Space Station aboard the next resupply rocket, a SpaceX Dragon 9, which is set to take off this Sunday, June 28th. Once there, astronauts will test the devices to make sure they work and can receive information and images from Earth. The collaboration between NASA and Microsoft, known as “Sidekick,” will eventually allow astronauts wearing HoloLens headsets to give operators back on Earth a first-person look at what they’re seeing. The ground operators can then draw 3D holographic images in front of the astronauts to help direct them through research and repair work, a setting called “Remote Expert Mode.”

Another setting, called “Procedure Mode,” will enable astronauts wearing HoloLens on the space station to see animated illustrations on top of the equipment they’re using, without the aid of ground operators.

Although just experimental for now, NASA and Microsoft both are optimistic about the future promise of the technology, saying it could eventually be used to help astronauts explore other worlds. “This new technology could also empower future explorers requiring greater autonomy on the journey to Mars,” said International Space Station program director Sam Scimemi in a statement released by NASA.