Our bravest ancestors may have hunted giant sloths

Or maybe they were just having fun? 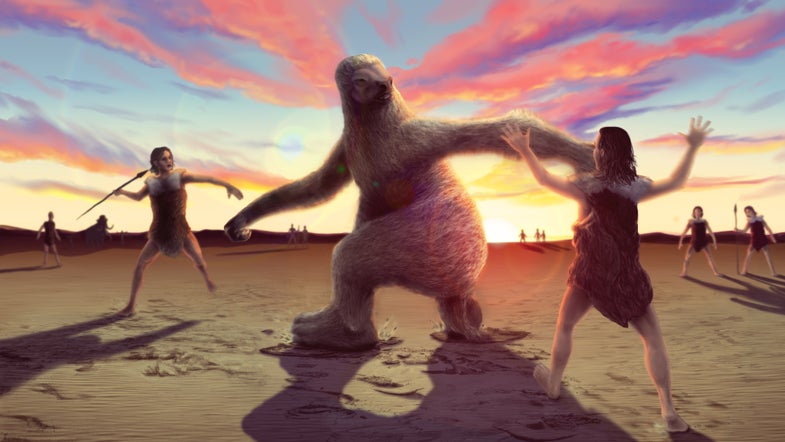 You might think a ground sloth would be easy to kill. Surely you could just, you know, walk right up to it. They’re so slow. What’s it gonna do, walk away from you at half a mile per hour?

If you, like me, made this joke when reading the recent headlines about humans stalking sloths, I have some bad news. Ground sloths were actually terrifying and quite hard to kill, not in the least because they were about eight feet tall and possessed long, curved blades on their feet (known better as “claws”). Some species even had bony bits incorporated into their skin that acted like chainmail, along with thick hides to protect them from spears.

The humans who hunted these behemoths must have been badasses. It’s been difficult to tell whether humans hunted them at all, though, because sloth fossils aren’t often found with cut marks on their bones. This may be because they were simply so big that people didn’t need to scrape down to get enough meat off their carcasses. But paleontologists were still fairly sure that ancient humans hunted down and ate at least some. Now, we have evidence that they stalked ground sloths.

They also discovered that the sloths attempted some evasive action. Whereas sloth tracks unaccompanied by human prints went in straight or gently curving lines, the tracks where a sloth was (apparently) being hunted showed sharp turns. The sloth was trying to lose its pursuers, the researchers argue. The team didn’t uncover any sloth remains near the tracks, which may be a sign that these particular hunts were unsuccessful. They point out that this is unsurprising—94 percent of hunts by the modern Hadza tribe end in failure, at least according to one study. They’re tracking and eating warthogs and porcupines and other mammals, not enormous sloths, but the principle is similar: it’s hard to find and kill large animals.

The prints have yet to be dated, but the team thinks they were from the late Pleistocene, which would be about 11,000 years ago. Some paleontologists think it’s possible that humans hunted ground sloths to extinction around this time, helped along by the changing climate at the end of the last ice age.

Of course, it’s also possible that these tracks are just evidence of humans coming across some sloth prints and following them along. It seems that the hunters were extending their strides to deliberately walk inside the sloth tracks, like a little kid trying to step exactly in her mom’s footprints. Normal human strides should be about 60 centimeters apart (that’s about 23.5 inches), but the marks inside the sloth prints were more like 80 to 110 centimeters apart. It’s not clear why hunters would want to step within the tracks. Maybe they were just trying to have some fun with it, though. There probably wasn’t a whole lot to do for entertainment in the late Pleistocene.

We should just all be grateful that the U.S. isn’t still inhabited by eight-foot-tall sloths. Slow as they may have been, their claws were no joke. Even the grippers on small tree sloths look like they’d give you an infection from a slight jab, and ground sloths would have been faster and more muscular than their canopy-dwelling cousins. Our early ancestors were true warriors for wanting to follow their tracks at all—even if it was just for fun.