Volcanoes giveth, and volcanoes taketh away. 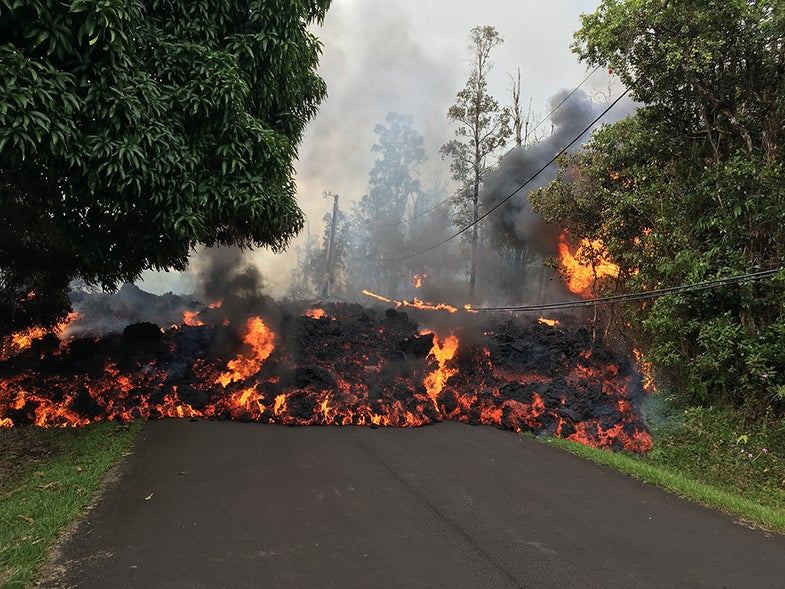 Volcanoes have created more than 80 percent of the planet’s surface. Currently, one of the world’s most active volcanoes, Kīlauea, hovers over a hotspot in the lithosphere, the portion that makes up the Earth’s crust and upper-most mantle, that’s responsible for the formation of the entire Hawaiian Island chain. Kīlauea has erupted continuously since 1983. Last week, a new eruption sprouted in the Leilani Subdivision on the sprawling volcano’s southeast flank, with fissures popping up along a 2.5 mile stretch and lava covering 116 acres and claiming 36 structures. Here’s what you need to know about Kīlauea and the latest eruption. These particular eruptions are heavily monitored Hawaii’s volcanoes are classified as “shield” volcanoes due to their gently sloping profile built up over time by a steady flow of lava. Unlike composite, conical-shaped volcanoes—Mt. St. Helens in the Pacific Northwest—shield volcanoes are characterized as effusive versus explosive. That means they do not generally erupt like an uncapped fire hydrant, throwing lava and rocks thousands of feet in the air and billowing unending clouds of ash the way the 2010 eruption in Iceland closed airspace across Europe. Many volcanoes are nearly impossible to forecast, but the shape and slow-moving behavior of Hawaii’s volcanoes make them some of the easiest and safest to study.

In 1912, the establishment of Hawaii Volcano Observatory (HVO) on Kīlauea’s rim triggered the scientific field of volcanology. For over a century, a growing set of instruments has been used to monitor—and forecast—Kīlauea’s volcanic activity. Because active volcanoes make for unstable land, highly sensitive seismometers come in handy to track the frequency and strength of micro-earthquakes. Global Positioning System (GPS) devices and another satellite-based technology, InSAR (Interferometric Synthetic Aperture Radar), map ground deformation (inflation and deflation) to within a fraction of an inch while tiltmeters measure slope from ground level. Together, these technologies help track lava’s movement underground and help pinpoint where it might break through the surface.

As HVO geologist Janet Babb says, “Every inch of the Island of Hawaii was a lava flow at one time or another.” Five volcanoes created the island—and only one, Kohala, is considered extinct. Mauna Kea is categorized as dormant, meaning it has not erupted in the last 200 years; however, it certainly may in the future. Then, there’s Mauna Loa, Hualalai, and Kīlauea, all three clustered on the south side of the island and all three active—as is Haleakala on Maui. Kīlauea is simply the only volcano currently erupting lava on the island’s surface.

Until early May, Kīlauea’s activity was centered at two locations—at the summit’s 4,190-foot Halemaumau crater, located inside Hawaii Volcanoes National Park, and at a lower elevation along the East Rift Zone known as PuuŌō vent. Things started to get interesting the last week of April when the lava lake at the summit rose and spilled over into Halemumau. Then, on Monday, April 30, the lava lake drained, as if someone pulled the plug in a bathtub.

Downslope, similar changes were underway at PuuŌō. Within hours seismometers picked up hundreds of shallow earthquakes migrating east—toward neighborhoods—and triggering Hawaii County Civil Defense to organize evacuation centers. The morning of May 3rd, a magnitude 5.0 earthquake rattled more nerves and caused the release of a short-lived pink plume of ash from PuuŌō. By that evening, a fissure of approximately 500 feet had sliced open the ground at Leilani Estates subdivision along the lower East Rift Zone, producing lava fountains and causing the mandatory evacuation of two residential subdivisions. Since then, 14 more fissures of varying size and duration have opened up, spattering lava and spewing sulfur dioxide gas to the sounds of crackles and pops.

Eruption temperatures can reach 2,000 degrees Fahrenheit, plenty hot enough to burn homes and forests to the ground. But even if lava isn’t marching down your street, potentially lethal rates of sulfur dioxide gas may be present up to a half-mile away from the eruption site. Then, there is the threat of earthquakes. On May 4, after a series of strengthening earthquakes, a magnitude 6.9 temblor—Hawaii’s strongest quake in more than 40 years—struck the south flank of Kīlauea. In fact, the rocking could be felt in Honolulu, a couple hundred miles away. There were secondary worries as well. Earthquakes can trigger deadly tsunamis—and generated mega-tsunamis in times before humans occupied these islands—but the Pacific Tsunami Warning Center quickly issued a statement, saying, “No tsunami is expected. Repeat. No tsunami is expected. However…some areas may have experienced strong shaking.”

There is such a thing as volcano preparedness

Using the location of historical eruptive sites, past lava coverage, and current topography, the U.S. Geological Survey (USGS) created a map of Hawaii Island ranking areas for the threat of lava hazards. Turns out, Leilani Estates sits smack in an area of highest threat—Zone 1—and last saw an eruption along its southernmost boundary in 1955. The northwest corner of the island, where the volcano known as Kohala has not erupted for 60,000 years, sits in Zone 9, considered the least hazardous region. The purpose of the map is to encourage residents to understand the threats they face and to make a plan for evacuation before an emergency arises. HVO posts daily public volcanic updates, and the County of Hawaii issues watches and warnings the way other communities put out flood, tornado, and hurricane notices—although perhaps a little unique to volcano emergency preparedness kits is the recommendation of a “respiratory mask and goggles for working outside in volcanic ash.”

Babb and fellow scientists may have some pretty snazzy technology that tracks what the volcano is doing, but they say they don’t know what caused Kīlauea’s change in activity nor when it will end. One thing’s for sure—the alerts from HVO keep coming. The latest: that there’s a possibility of explosive eruptions at the summit that may include ballistic projectiles weighing a few pounds to several tons.