From the slimy blobfish to the mighty auroch, these are the most iconic digital creatures. 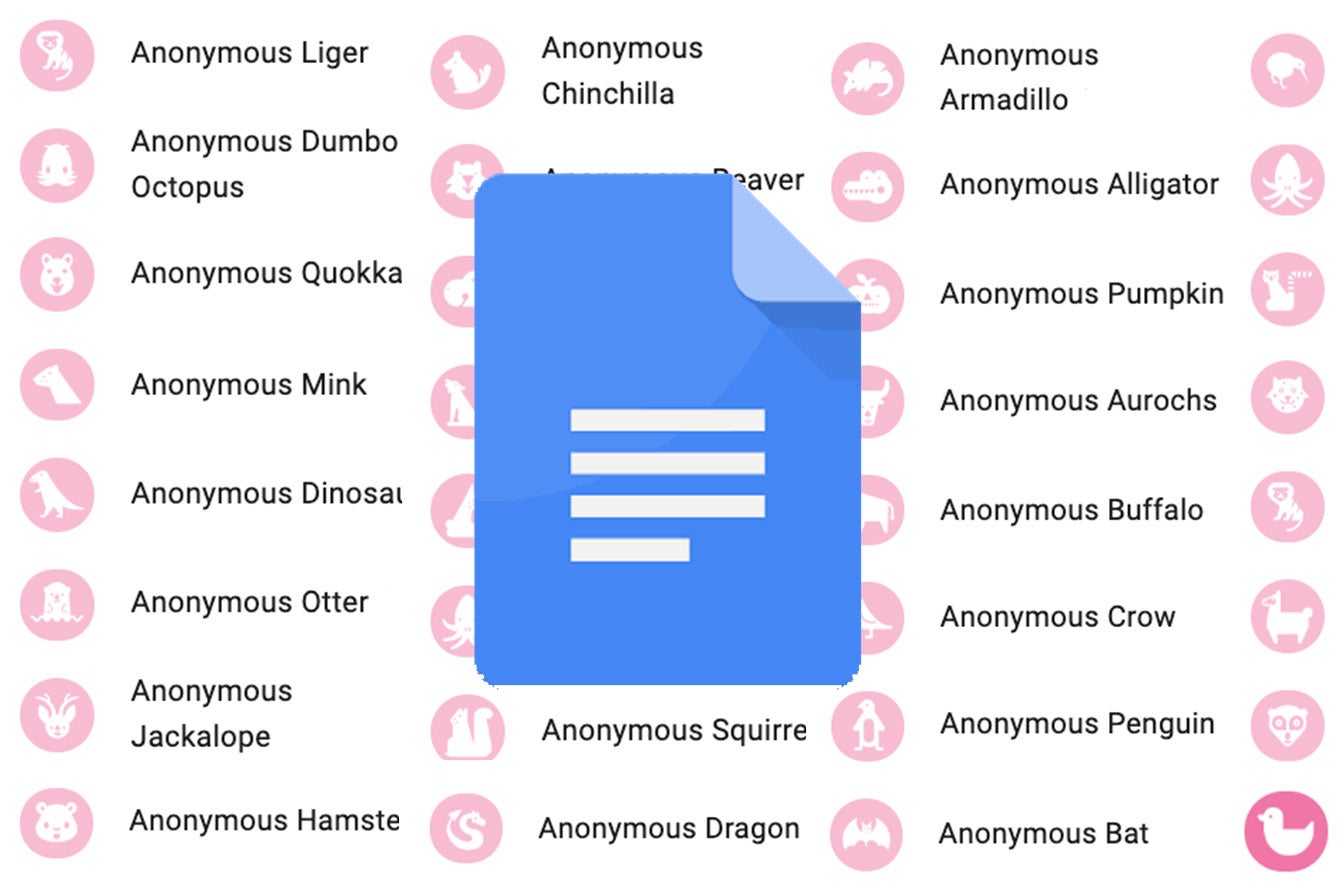 Google Docs are the cursor-clogged artery of the modern internet. The service lets you write in a flexible word processor that saves everything to a central cloud. That way, content is never lost, changes are always tracked, and you can access it anywhere (except, let’s be honest, on your phone, where everything is so scrunched, comments are impossible to track). It’s the raucous draft stage of basically every article on the internet, including PopSci‘s. But far and away the most delightful feature are the anonymous animals.

Normally, when you open up a doc, your presence is marked by a little icon of your face or the first letter of your name in the upper right-hand corner. But when you view a doc anonymously, you’re instead assigned one of several dozen animals. Google declined to comment for this story, but I was able to find a very long, crowdsourced list of critters online. Some are fictional, like the chupacabra or the meme-derived Nyan Cat. Others mundane, like the hamster. There are no insects, but somehow one plant (a pumpkin) made its way into production. And many members of this digital zoo are potent symbols of real-world declines in biodiversity: by my count, approximately a dozen of the 70-odd species are endangered, or already extinct.

You can’t control what anonymous animal they’re assigned—an algorithm does that for you. But one can still hope that the next roll of the Docs dice lands you one of these clearly superior creatures:

This flightless avian is the avatar for all New Zealand. Even the humans there call themselves kiwis. Relative to body size, it lays the largest egg of any bird in the world, with unhatched chicks clocking in at 20 percent of mom’s weight.

Crowned the ugliest animal in the kingdom, the blobfish’s goopy looks are advantageous for its oceanic niche. It lives as deep as 3,900 feet below sea level, where staying buoyant is a tough business. The blobfish compensates with a gelatinous body slightly less dense than water. This allows it to float just above the surface of the seafloor without wasting any energy.

This zebra once roamed the plains of South Africa, but Dutch colonists hunted it into extinction by the 1880s. This photo, of a female quagga at the London Zoo in 1870, is reportedly the only image of the species ever taken. The only other tangible evidence of its existence are 23 preserved hides. Like other zebras, the quagga had stripes on its head and neck, but they tapered off, to a caramel brown body, with white legs and belly. In 1987, German natural historian Reinhold Rau started the Quagga Project, to selectively breed other zebra populations with brown hides and fewer stripes. While these animals may eventually look like the quagga, it’s far too late to preserve their unique genetics.

They poop cubes. What else do you need to know?

You wish this was the face welcoming you home at the end of a long day. Good thing quokkas are mainly nocturnal. The cat-sized marsupial, which has lived most of its evolutionary history without predators on Australia’s southwestern coast and its outlying islands, isn’t afraid of humans. It’s often pictured with its arms outstretched, a radiant smile across its face. But their populations are considered vulnerable, because they’re subject to predation by dogs, house cats, and foxes. And, given they live in small and isolated groups, they’re particularly vulnerable to natural disasters. A 2015 brush fire killed 90 percent of quokkas in the area. Hug this icon close.

The auroch is used to its icon status. Humans have been depicting the wild cattle for at least 20,000 years, when it showed up in cave paintings in Lascaux, France. The ancient cow was a mighty herbivore, with 30-inch-long horns and an estimated maximum weight of 3,300 pounds. Talk about an absolute unit. Now extinct, it’s thought to be the progenitor of some modern, domesticated cattle populations, namely South Asia’s stately zebus.

This amphibian has it all. It looks like a fish, but it walks on legs. Instead of scarring, like many salamanders, it regrows lost limbs. And it has emotional range; sometimes, you may think it’s smiling, but other times, you sense it plotting your death. But much like the quagga or the auroch did historically, the axolotl faces extinction in the wild today. The species is native to the lake beneath Mexico City and was a staple of the Aztec diet. As Mexico City has urbanized, the lakes have shrunk and suffered from pollution, affecting all of the wildlife within.