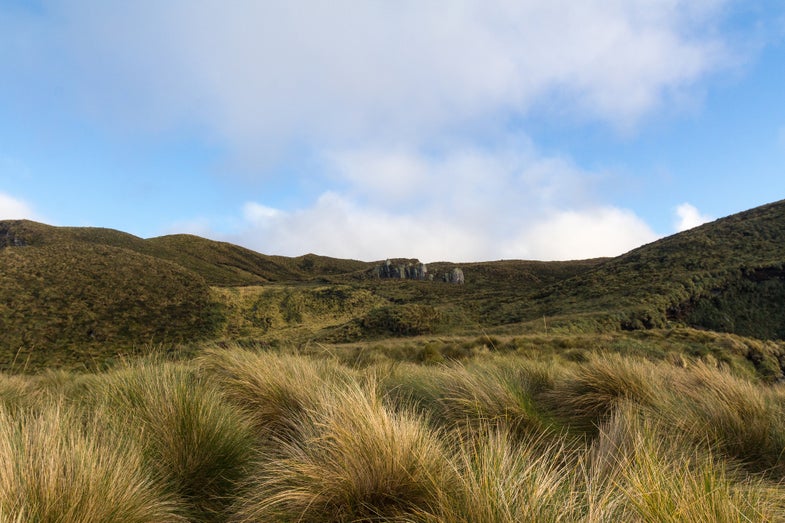 Compared to New Zealand, we are all terrible at getting rid of mice. The country just totally eradicated the 200,000 or so rodents scurrying around the subantarctic Antipodes island.

Unlike most of the mouse traps around the world, this was not about helping humans. In fact, humans won’t benefit from this mission at all. There are no people on Antipodes island and there never will be. It’s a remote nature reserve and World Heritage site, because it’s home to an enormous number of plants and animals found nowhere else in the world. Four land birds, 21 uncommon plant species, and a couple dozen insects are unique to the island.

You’ll notice that mice are not listed. Mice are not native to Antipodes island, just as they’re not native to any other part of New Zealand. So when they arrived by ship (alongside whalers and sealers and explorers) they invaded. Mice are excellent invaders. They’re small, they breed fast, they eat a broad diet—they’ll infiltrate anywhere, anytime. In the last few decades, though, New Zealand’s Department of Conservation realized that mice and other mammals were decimating native plants and animals, especially on islands like Antipodes. They were eating everything, including baby chicks of rare birds that hadn’t evolved any protection from rodents. They’d already wiped out two insect taxa, and had forced two bird species from the main island to smaller ones offshore.

And so the New Zealand government started systematically eliminating the mice.

They had some experience in this area, because New Zealand is an island nation with no native land mammals whatsoever. Sheep, mice, cats, stoats, hedgehogs, deer—they all arrived with humans in the last few hundred years. That means the Department of Conservation (DOC) has had to figure out effective ways to get rid of mammalian predators before. They had previously eradicated mice from some smaller islands near to the mainland, but the Antipodes effort—dubbed the Million Dollar Mouse project—is one of the largest ever attempts to rid an area of mice. Antipodes island is about 2,100 hectares, which is roughly 1.5 times the size of Los Angeles International Airport (that sounds small, but just go on Google Maps and look how huge it is).

To eradicate mice on the entire island, though, you first have to get a whole team of people there. That means a three-day boat ride from the southern tip of New Zealand, down into the subantarctic zone, bringing all the supplies they’d need with them (you can read about The Chorizo Affair, in which they accidentally got 382 packages of chorizo instead of 35, on their brilliant blog). There’s no harbor, so the 13-person crew had to climb up sea cliffs to get onto the island, and they slept in small huts with no electricity. They stayed for several months in winter 2016, spreading poison bait over the entire island in two separate treatments—144,400 pounds in all.

In between, they got down to some other conservation work. They tagged birds and collected insects. They surveyed animal populations. They ate loads of chorizo, sometimes on pizza.

The whole mission didn’t take long to set in motion, but then they had to return to the mainland and wait. Part of the problem with eradicating mice is that they’re so darned hard to find. You can’t kill them off and then immediately look for evidence that they’ll all dead. You’ll probably never find two lone mice on a 2,100-hectare island, and two mice can do a lot of damage once they start getting it on. So you have to leave, wait, and see whether the population rebounds in a couple years. If any mice survived in 2016, there’d be plenty of offspring by 2018.

A team went back to the island at beginning of the year to check, and spent weeks trying to find any sign at all of the little critters. They checked the chewing papers left behind for evidence of mouse bites. They took two adorable dogs out to sniff for the buggers. And they found nothing. No mice.

This is, to put it bluntly, huge. Yeah, it’s only 1.5 times the size of a large airport. And yes, it’s just one island, and a remote one at that. It’s only a tiny fraction of the world’s fragile ecosystems, and an even tinier percent of the world’s at-risk species, that they’ve saved. And it took $3.6 million to do it.

But the point is: they did it. It can be done. This is, as the BBC wrote, considered “one of the most sophisticated pest eradications project ever carried out in the world.” It’s basically proof that in at least some cases, we can save ecosystems from invasive species. Other island nations might be able to follow in New Zealand’s footsteps, and though larger land areas might be impossible to entirely rid of pests, the techniques they used here could inform how other countries approach pest management.

The Kiwis are basically the world’s leading experts on invasive species eradication—their methods are the gold standard now. They’ve had more successful projects than almost any other country in the world. And they’re going to need a lot more. The New Zealand government has pledged to rid the whole country of invasive species by 2050, which for a country with no native mammals will be quite a challenge. But this is exactly how you have to do it: one island at a time.