Electric race cars will finally get through a race without recharging

A power boost for Formula E. 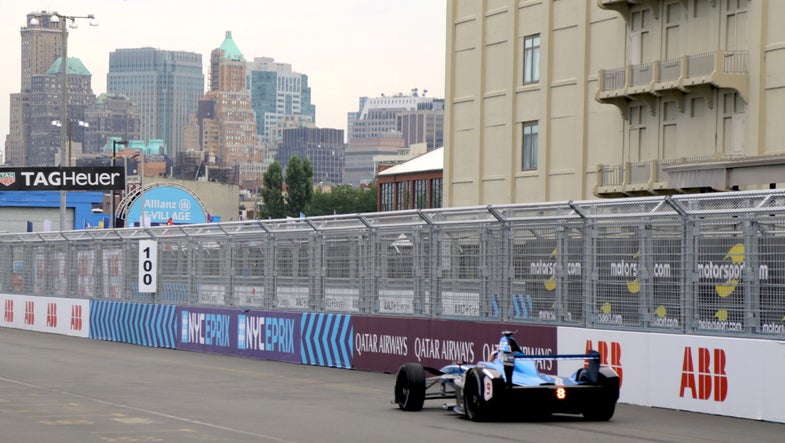 Cars zipped past at blistering speeds, only slowing to round the hairpin turns etched into the waterfront course in New York City. Spectators lined up at the edge of the roadway, close enough to see the drivers strain against their steering wheels. From that distance, fans could smell the burning rubber and feel the rush of wind as cars bolted past, but they could not hear the roar of any internal combustion engines. That’s because these cars run on lightning, and they scarcely make a sound. The gearbox of a Formula E race car generates the same whirring hum as Luke Skywalker’s landspeeder, but the cars are otherwise noiseless. Powered by electricity, the vehicles use no liquid fuel and produce no emissions, and that is the least impressive thing about them. Formula E cars can go from zero to 60 in three seconds and reach top speeds around 140 miles per hour, more than enough for the winding street circuits where they compete. Jean-Eric Vergne, the winner of last week’s race in Red Hook, Brooklyn — the twelfth and final contest of the 2017–2018 season — beat the next closest competitor by just half a second. Next year, races could be even tighter, as Forumla E adopts faster cars with more range and power.

Currently, cars last around 25 minutes before needing to be recharged, so drivers have to switch to a second car mid-race. For the fifth season of Formula E, which begins in December, each car will sport a battery large enough to make it through an entire 50-minute race. They will also feature a more aerodynamic design to compensate for the added weight. The million-dollar cars promise a top speed of upwards of 170 miles per hour, more than 30 miles per hour faster than their predecessors and closer to the speed of NASCAR and Formula 1 race cars.

While teams can customize their car’s motor, inverter, and transmission, the battery of each car is standardized and its output capped at 180 kilowatts. In certain circumstances, organizers allow batteries to deliver more power, allowing cars to go faster. Drivers who win support on social media can earn a “fanboost,” which increases the power available in their cars for a few seconds toward the end of the race. Starting next season, drivers will also be able to unlock a brief power boost a few times each race by taking a detour through an “activation zone.”

Much of the strategy of Formula E comes down to managing a finite supply of energy. Drivers can’t make a pit stop to fill up on gas, so they have to be careful about how to ration their battery — when to lay back and conserve energy and when to floor it to overtake an opponent. The tension between speed and endurance sets Formula E apart from Formula 1 and NASCAR, which are more about using brute force to overtake the competition.

In Formula E, for example, drivers have little incentive to speed ahead of the pack, as a collision might bring the safety car onto the track, and the leader will have wasted precious energy putting distance between himself and his opponents. That doesn’t mean, however, that drivers always play it safe. Points are awarded for completing the fastest lap, incentivizing those at the back of the pack to drive more aggressively, even if that means they fail to improve their position overall.

The sport has grown in popularity among both fans and automakers. Formula E manufacturers already include big name firms like Jaguar and Audi, and BMW, Porsche, Nissan and Mercedes-Benz are set to join in upcoming seasons.

The high-tech sheen of all-electric racing has also garnered the attention of a number of celebrities. Last week’s race in Brooklyn drew several stars, including Liv Tyler, Uma Thurman and Natalie Dormer. Celebrity CEO Richard Branson came to the sport years ago, when he founded the Virgin team. Leonardo DiCaprio co-founded the Venturi team, believing that Formula E could advance the cause of clean energy and help address climate change.

It was appropriate, perhaps, that last week’s race took place amid soaring heat and oppressive humidity. Temperatures in New York state have risen 2.4 degrees F since 1970, making summer weather all the more intolerable. To help keep rising temperatures in check, consumers will need to abandon their gas guzzlers in favor of electric vehicles. Formula E could help by ginning up interest in electric cars and giving engineers a venue to test cutting-edge EV technology.

Overseas automakers like BMW, Audi and Jaguar, as well as U.S. automakers like Ford and General Motors, are betting big on electric vehicles. This is partly a nod to changing regulations overseas—China, India, Norway, France and the United Kingdom have all promised to ban the sale of gas-powered cars in the next couple of decades — but it’s also a response to the rapidly falling cost of producing electric cars. Bloomberg New Energy Finance projects that by the end of the next decade, electric cars will be cheaper to manufacture than gas-powered cars.

Formula E promises to stay ahead of the consumer market by continuing to improve the speed and stamina of electric cars. Racers have every incentive to make cars more efficient, and their innovations could be used to improve consumer models. A Formula E race isn’t just a chance to see racers compete. It’s also a preview of things to come.