How It Works: A Wiffle Ball Pitch

Take a whiff of that 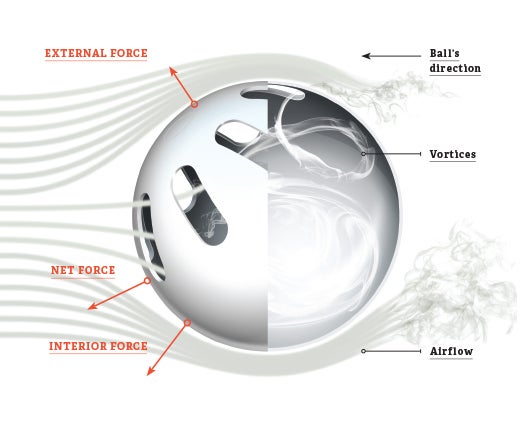 The Wiffle ball has been fooling batters since its invention in 1953, but scientists only recently learned why. Mechanical engineer Jenn Stroud Rossmann at Lafayette College placed the ball in a wind tunnel, measured airflow around it, and concluded that the shifting balance of forces inside and outside the ball is what makes it so devilishly hard to hit.

NET FORCE
The strengths of the internal and external forces shift constantly while the ball is in flight. The net of the forces is what dictates the ball’s path.

HOLES
The holes are on just one side. They disrupt airflow, increasing turbulence over that half of the ball.

EXTERNAL FORCE
More turbulence means less drag on that side, resulting in an upward “lift” force.

VORTICES
Air rushing into the holes creates vortices that whirl inside. The ball’s orientation, spin, and velocity all affect how those vortices develop.

Scratching the smooth surface between the holes creates more turbulence on that side, strengthening the curve. Asymmetry is key, so scuff only the one side.

Enlarging the holes or smoothing their edges can increase interior airflow and make it the governing force, causing the ball to break toward the solid side.

Toss the ball at an easy speed, without spin, so the holes will face the batter upon release. In this orientation, the internal and external forces are at a perilous equilibrium: If the ball turns slightly—and it will—dominant airflow will shift and create a dramatic and unpredictable break.

Continue reading about How It Works: an electric racecar, private moon-landers, and more