The Microscopic Future of Surgical Robotics

Chances are, you aren’t, and never will be, an astronaut. So the recent revelation that NASA is funding the development... 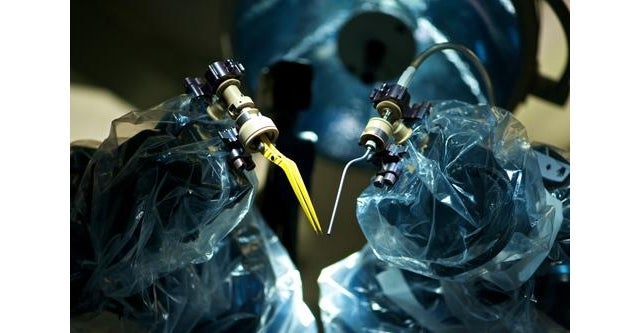 Chances are, you aren’t, and never will be, an astronaut. So the recent revelation that NASA is funding the development of a somewhat gruesome-sounding surgical bot—a fist-size contraption that would enter a patient’s gas-engorged abdomen to staunch bleeding or remove a ruptured appendix—isn’t exactly news you can use. The more relevant announcement might be from Intuitive Surgical, which announced that its newest robo-surgeon has been approved by the FDA. With thinner and more maneuverable arms, the da Vinci Xi will turn more open surgeries into minimally-invasive, robot-assisted procedures. Instead of requiring large incisions to get at various portions of a patient’s anatomy, the Xi will let surgeons reach essentially anywhere in the abdomen through smaller less traumatic punctures. With this clearance, the likelihood that you’ll one day be under the robotic knife just jumped significantly.

This is the near-term for robotic surgery, a gradual expansion of machines throughout the body, and through the full range of possible procedures. In addition to the da Vinci’s primary focus on the abdomen, bots are currently aiming drills in the brain, reshaping joints, and using lasers to correct vision. But the future of surgical bots appears be in some of the most challenging and specialized operations: microsurgery, or surgeries performed at a microscopic scale.

“Right now all of the operations we do are on the scale of human eyes and human hands,” says Catherine Mohr, director of medical research for Intuitive Surgical, referring to da Vinci-assisted procedures. “That’s because traditionally, medicine has been the laying of hands of the physician onto the patient, and trying to intervene. But we may be able to get that patient that much better an outcome because we’ve changed the scale of that interaction with robotics.”

It’s not that microsurgery is unheard of today. The issue is that, despite the fact that microscope-enabled surgery has been practiced for close to a century, it’s such a remarkably difficult and specialized skill, that the spectrum of related procedures is vanishingly narrow. And when those operations are possible, the waiting list for qualified surgeons can stretch for up to a year.

Robots, however, could turn more surgeons into microsurgeons, by translating large movements into minuscule ones. “Think about working in Photoshop, and you’re zoomed way in, working a pixel at a time on an image,” says Mohr. “Your mouse motions are still comfortable motions with your hand, but the scale that you’re working at is completely different.”

Microsurgery wouldn’t replace traditional surgeries, but could help solve specific problems. One example—though Mohr noted that it isn’t FDA approved, or backed up with overwhelming clinical data—would be treating breast cancer patients, who often suffer severe swelling and pain in their arms and hands following the removal of lymph nodes. This condition, called lymphedema, is caused by the disruption of natural drainage channels, meaning that blood isn’t flowing properly back through the patient’s system. Redirecting blood flow is theoretically possible, but incredibly challenging, as surgeons try to sew tiny vessels that are only barely visible under a microscope. “I’m excited that, if I can change that scale, for someone who’s got this terrible edema, we could start sewing their lymphatic channels onto the local veins, and drain it,” says Mohr. “So instead of spending their lives with compression stockings on their arms, we can go in and do a small intervention and fix it.”

For Intuitive Surgical, microsurgery is a target for research, but not a confirmed direction for development. But a microsurgical robot built by researchers at the Eindhoven University of Technology in the Netherlands is currently in clinical trials, with results expected by 2015. The unnamed bot is operated with dual joysticks and a foot pedal that adjusts the scale. It’s initially intended for complex reconstructive procedures in the hand and face, offering increased precision for microscopic procedures, such as connecting nerve fibers and tiny blood vessels.

The NeuroArm, a robot that can perform micro-scale neurosurgery while a patient is undergoing an MRI, has already been used in Canada to remove a 21-year-old patient’s brain tumor. The bot, which uses non-ferrous materials (to avoid interacting with the MRI’s magnets), was acquired by surgical imaging firm IMRIS, and has since been rebranded as the SYMBIS Surgical System. SYMBIS isn’t available for sale yet, but IMRIS already sells specialized MRI systems, which allow for scans mid-procedure. Once it’s cleared for use, SYMBIS would allow the surgeon to image the patient’s brain without removing instruments.

There are other examples of microsurgical bots currently in development, including Johns Hopkins University’s Steady-Hand Eye Robot, which deals solely with retinal procedures, and Carnegie Mellon University’s Micron, a handheld robotic instrument that would use gyroscopes and actuators to actively boost the precision of the surgeon. All of these systems are years and possibly decades from use, if they make it to market at all. But Intuitive Surgical’s interest in microsurgery is a clear indication of what’s to come. Despite a series of lawsuits leveled at the company in 2013, and the subsequent negative media coverage and pummeling in the stock market, Intuitive is the biggest maker of surgical robots, and one of the driving forces in the entire robotics industry, with systems that routinely sell for more than $2M, and more than 200,000 da Vinci procedures conducted yearly. And according to Mohr, adding micro-scale capabilities might not require entirely new robots, but rather new instruments and other modular components that would attach to some portion of the more than 2500 da Vinci’s already installed worldwide.

For us prospective patients, it doesn’t necessarily matter who makes microsurgery more accessible. What matters is that it’s coming. “We as a medical community haven’t made a lot of therapies that require that kind of super microscopic view and manipulation, because those are at the limit of what the human hands can do at unscaled motion,” says Mohr. “But if we kind of break that barrier, I think it will unleash a lot of new therapies that will have profound effects on patients’ lives.”