Wind farms could absorb some of the energy from hurricanes before they hit land. 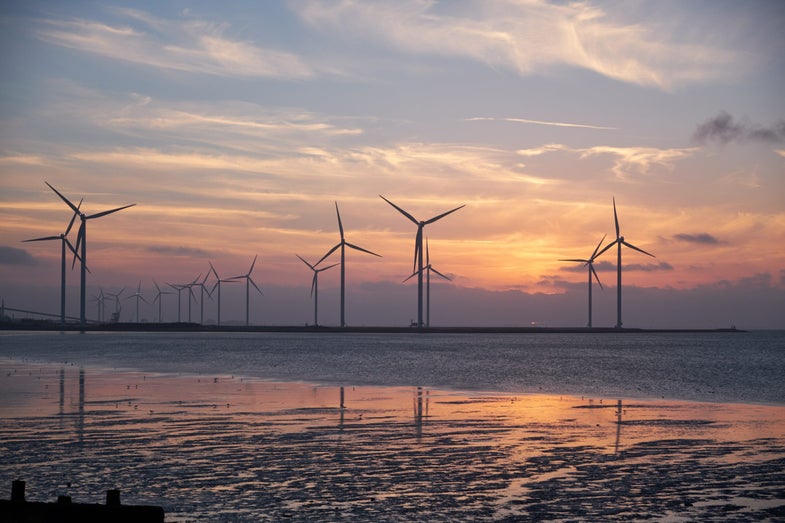 The advantages of wind power are well-known. Wind is clean, plentiful, and renewable. Installing turbines in large numbers could help wean our carbon-intensive civilization from its addiction to fossil fuels. New research suggests that one day there could be another major benefit: massive installations of wind turbines could lessen the deluge when powerful hurricanes bring devastating amounts of rain onto land. During such recent storms as Harvey and Florence , which brought historic levels of rainfall ,  this could have meant less flooding and destruction, and fewer deaths. “Offshore wind farms definitely could be a potential tool to weaken hurricanes and reduce their damage,” says Cristina Archer, a professor in the University of Delaware’s College of Earth, Ocean and Environment, who conducted a recent study published in the journal Environmental Research Letters describing the impact of offshore turbines on hurricane rainfall. “And they pay for themselves, ultimately, which is why I am excited about this.”

Climate change has been driving larger and more intense hurricanes in recent years. Evaporating sea water fuels hurricanes, whose strength depends on how rapidly water can evaporate from the ocean. When sea water evaporates, it transfers heat from the ocean to the atmosphere, which converts it into wind energy, creating stronger and stronger winds. As the temperature of the water goes up, so does the rate of evaporation — and so does the wind. The warmer the ocean, the faster the evaporation. And climate change is heating up the oceans at an ominous pace.

In earlier research, Archer demonstrated that offshore wind farms absorb kinetic energy from hurricanes, reducing the effects of wind and storm surge. Her latest study suggests that turbines might also decrease rainfall for onshore locations downstream from a wind farm — when deployed in very large numbers. “The motivation for this new study was basically Harvey itself,” Archer says. “It dumped an incredible amount of rain, and it was the rain that actually caused the flooding in the Houston area.”

To picture what happens when a hurricane meets a wind turbine — and how turbines can diminish rainfall — it’s important to understand the two significant factors that influence precipitation, convergence and divergence. Strong hurricane winds slow down when they hit wind turbines, and move upward because they have no other place to go. This brings more moisture into the atmosphere, boosting rainfall. That is convergence.

Divergence is the opposite; it causes downward motion, attracting drier air that is moving downward, which suppresses precipitation.

Convergence and divergence occur naturally in many situations. “For example, wherever we have a low-pressure center — associated with storms in the mid latitudes — typically the surface winds converge towards it,” Archer says. “Vice versa, wherever we have a high-pressure center, like during clear and warm weather, winds at the surface diverge out of it. When you have a change in land use, like from ocean to land, or from forest to pasture, this causes a change in the winds — deceleration from ocean to land, or acceleration from forest to grass -and thus you have convergence and divergence, respectively.”

Over a wind farm, the wind speed slows “because that’s what turbines do,” she says. “They extract kinetic energy from the wind, therefore the wind behind them, downstream of each turbine, is weaker than it was upstream. Put more and more turbines together in a large farm and you can imagine that you would start causing convergence ahead of the farm, before the winds hit the first turbines, and divergence past it, after the farm, where the winds accelerate again.”

Therefore, in order to have precipitation, there must be upward motion to bring moisture-rich air near the surface into the atmosphere, where it condenses and causes rain. “To get upward motion near the surface, you need to have convergence,” she says. Then, “to kill precipitation, you need downward motion, which is what happens when you have divergence at the surface. Obviously you also need a moisture-rich environment to start with. If you have convergence in the desert, no matter how strong, there will not be precipitation because it is too dry.”

That’s why the scientists studied the impact of offshore wind farms, rather than land-based ones, as hurricanes form over water and dissipate quickly once they reach land. “There is plenty of moisture [offshore], thus it was more likely that we would see an effect,” she says. “We looked at hurricanes because they last long enough that the patterns of convergence/divergence can form and persist. If you think about it, a hurricane lasts for days and causes strong, steady winds from pretty much the same direction — from the ocean to the land.” 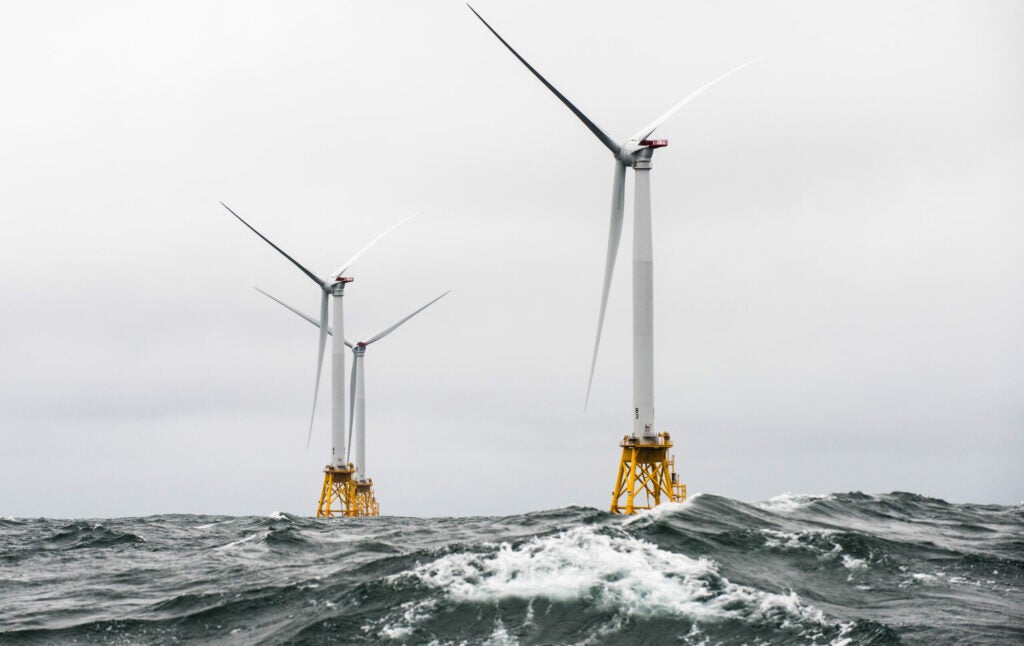 Turbines off the shore of Block Island.

One current drawback is that turbines often are now turned off during high winds. Archer said their computer simulations took the “cut-off” wind speed into consideration, which currently is 76 miles per hour for the Enercon 126, a German offshore wind turbine model. However, manufacturers now are developing new turbines that will withstand even stronger winds, such as those in hurricanes and typhoons, and these are expected to be on the market in 2020, she added.

The scientists used numerical computer simulations that covered the coast of Texas and Louisiana, examining what might have occurred in the presence of offshore wind farms during Harvey. They looked at a wide range of numbers of turbines, over different sized areas, and in a variety of layouts.

“By the time the air reaches the land, it’s been squeezed out of a lot of moisture,” Archer says. “We got a 30 percent reduction of the precipitation with the Harvey simulations. That means, potentially, if you have arrays of offshore turbines in an area where there are hurricanes, you will likely see a reduction in precipitation inland.”

The study used hypothetical turbines ranging from a control case of zero turbines to a maximum of 74,619, a number currently unrealistic for the United States, she said. Unlike Europe — where there are more than 100 offshore wind turbines — the United States only has five, all part of the nation’s first and only offshore wind farm located on Block Island, off the coast of Rhode Island.

Although she believes the more turbines the better, the scientists found there were positive effects of using fewer turbines or placing turbines over a smaller area. “For example, you do not need to have [turbines covering a large area],” Archer says. You can get pretty much the same benefit with [a smaller layout] placed ‘smartly’ for Houston.”

At this time, she said the researchers can’t project the optimal number of turbines needed, although “the more [offshore] wind farms you have, the more impact they will have on a hurricane,” she says. “By the time a hurricane actually makes landfall, these arrays of turbines have been operating for days and days, extracting energy and moisture out of the storm. As a result, the storm will be weaker. Literally.”

She points out that communities can build sea walls or artificial barrier islands to protect against storm surge. But these won’t protect against rain. “The costs are high and they only serve one purpose,” she says. “An alternative is to build offshore wind farms, which [ultimately] pay for themselves, generate clean and renewable energy, and — cherry on top — protect against hurricanes, including rain and storm surge.”