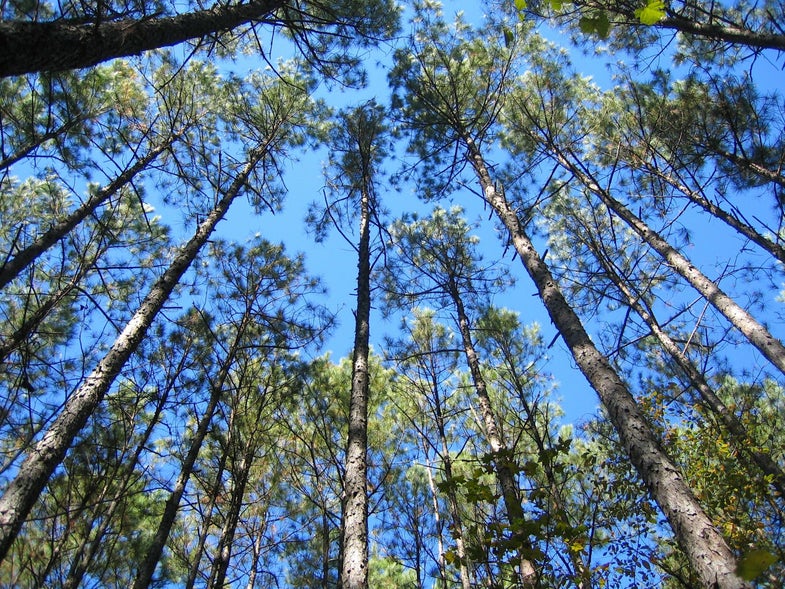 The loblolly pine isn’t the first choice of Christmas tree lovers. It’s not as compact as fir or spruce, and its needles are longer, so it doesn’t hold ornaments well. But the loblolly has a storied history, nonetheless.

The famous Eisenhower Tree, on the 17th hole of the Augusta National Golf Club, was the bane of President Eisenhower. He hit it so many times while playing that he asked the club to cut it down. To avoid offending the president, the club’s chairman abruptly adjourned the meeting, rather than reject his request. (In 2014, the late president finally got his wish when an ice storm damaged the tree so badly, it had to be removed.) Loblolly pine seeds also traveled aboard Apollo 14 and were planted all around the country upon their return, including on the grounds of the White House. Some of these moon trees still survive.

Today, the loblolly is serving a more noble purpose by helping limit the need for fossil fuels. Researchers, tinkering with the tree’s genetics, have found a way to reverse-engineer how the loblolly produces resin, a discovery that could help manufacturers produce greener alternatives for a range of goods now made with oil and gas, including surface coatings, adhesives, printing inks, flavors, fragrances, vitamins, household cleaning products, paint, varnish, shoe polish and linoleum.

“The chemical composition of resins is not very different from that of certain fractions currently obtained from crude oil,” said Mark Lange, a professor in Washington State University’s Institute of Biological Chemistry. Lange wants to improve the production of resin to help reduce the chemical industry’s reliance on fossil fuels.

“These are fossil resources that were formed over millions of years,” he said. “They also are non-renewable, which means that once we run out, there is no way to replenish them within a reasonable amount of time. Before the advent of crude oil as a cheap raw material, pine resins were harvested and converted into many common household goods by the naval stores industry.”

Currently, only two industries generate commercial value from pine trees — lumber and paper. Thus, in conducting their experiments, “we were thinking about how we could decrease our reliance on fossil resources while increasing the use of renewable resources,” Lange said. Their findings appear in the Journal of Experimental Botany.

“Our immediate goal was to begin to understand how pines produce copious amounts of resin,” Lange explained. “Our longer term vision is to use this knowledge to develop trees that produce larger amounts of resin. Such trees can still be harvested sustainably for the timber and pulp and paper industries, but the resins might provide added value as a source for green chemicals. In other words, we are not thinking of resins as being the primary product but rather a high-value byproduct. Much of the commercial infrastructure, including scale-up, is already in place.”

Lange and his colleagues dissected the machinery loblolly pines use to produce oleoresin, a toxic component of resin that provides the tree with an important defense against insects and pathogens. Animals can flee predators, but a tree has no such ability, so the loblolly produces oleoresin. The chemical is so toxic that it has to store it in specialized compartments, called resin ducts, to keep from poisoning itself.

To understand how the trees make oleoresin, researchers studied the cells around resin ducts, cutting them out with a laser-equipped microscope. “Essentially what you do is draw around the area that you want to cut out and then the laser follows what you’ve been drawing and blasts it off,” Lange said.

Researchers then compared cells near the resin ducts with cells farther away, to find the genes that trigger oleoresin production. “Our work helps to unravel the mechanisms underlying the production of resin in pine trees, a secretion that can also serve as the basis for the production of renewable, green chemicals,” he said. Understanding the genetic blueprint of loblollies will help scientists improve resin production in pines, or even replicate the resin-producing mechanism in different species, such as an E. coli or yeast, Lange said. Doing so could help drive down the cost of resin, making it competitive with the chemical byproducts of oil and gas.

Plants have become a valuable resource for producing numerous consumer goods, including pharmaceuticals such as morphine and chemotherapy drugs, essential oils for aromatherapy, compounds that mimic estrogen, antioxidants, cannabidiol for pain control (not the stuff that provides the high), and most everyone’s favorite stimulant, caffeine. “As natural factories go, plants are industry leaders,” Lange said.

By supplanting oil and gas as a resource, plants could help the world wean itself off of fossil fuels, aiding in the fight against climate change. Manufacturers now dependent on oil and gas to manufacture these products will need to look elsewhere for raw materials. Plants could provide them. “There is a strong, almost universal, consensus across scientific disciplines that climate change is one of humanity’s most pressing challenges,” Lange said. “I think we can make a difference in the chemical sector by looking at resins as byproducts of existing commercial processes, which will have benefits both economic and environmental.”