California is set to go carbon-free by 2045

A new bill has been fast-tracked in the midst of a climate change-fueled wildfire season. 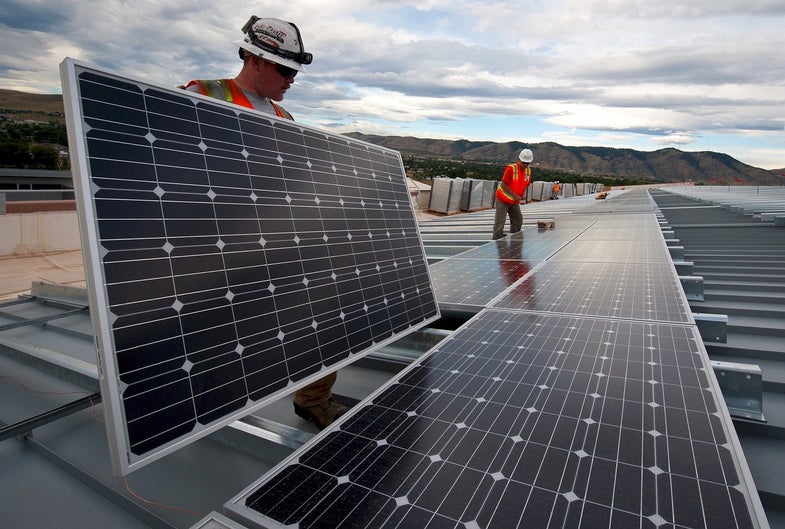 California—which, if it were an independent country, would have the world’s fifth largest economy—is joinning Hawaii in going carbon-free by 2045 thanks to a landmark bill to ditch electricity from fossil fuels for renewable energy. On Monday, Governor Jerry Brown made this quest an official mandate by signing SB 100 into law.

“California is committed to doing whatever is necessary to meet the existential threat of climate change,” Brown said.

The push to fast-track the state’s clean energy trajectory coincides with real-world climate change concerns. California is experiencing longer and deadlier wildfire seasons exacerbated by climate change even as the Trump administration rolls back federal programs for reducing greenhouse gas emissions from coal-fired power plants, cars, and trucks that contribute to global warming.

As groundbreaking as SB 100 would be, the shift to green energy wouldn’t be a big lift for California for several reasons, says Laura Wisland, senior energy analyst at the Union of Concerned Scientists.

The state is already close to meeting its first benchmark to increase its renewable energy portfolio to 33 percent by 2020, in line with state law SB 350, Wisland says. Another climate law, SB 32, requires California to limit statewide greenhouse gas emissions to 40 percent below 1990 levels by 2030.

Some of this shift will happen naturally as older power plants retire, Wisland says.

Already, new solar and wind-powered projects are starting to outbid new natural gas plants, says Mark Jacobson, professor of civil and environmental engineering at Stanford University. The kilowatt-hour price of electricity from new onshore wind and hydroelectric facilities is less than from new conventional energy sources, according to Jacobson. Add in externalities from fossil-fuel derived energy, including impacts from air pollution that harms human health and the environment, and solar energy becomes more affordable in the long run as well.

The Solutions Project, which Jacobson is a part of, provides a roadmap for California to 100 percent renewable energy by 2050 using a mix that’s about 55 percent solar, 35 percent wind, 5 percent geothermal, and 4.5 hydroelectric.

However, many energy experts disagree that aiming for a 100 percent renewable energy portfolio is the most cost-effective path going forward. For one thing, the availability of solar or wind power varies by time of day. Since long-term battery storage and extensive transmission networks for moving electricity across large distances don’t exist yet, nuclear power plants or natural gas plants with carbon capture and sequestration on dispatch may remain necessary to supplement renewable energy sources.

California currently gets about nine percent of its energy from its remaining nuclear power plant, Diablo Canyon. However, it’s unlikely that California will be expanding its nuclear energy footprint. Diablo Canyon is set to close in 2025 and a state law prohibits the construction of new nuclear plants until the government finds a way to safely store the radioactive spent fuel.

That’s why SB 100 gives California flexibility around how it will reach 60 percent renewable energy and become 100 percent carbon-free, Wisland says. For one thing, there are bound to be improvements and new technologies between now and 2045.

“Whether we have all of the answers today is not the most important question,” Wisland says. “You start by looking at the most cost-effective combinations of resources that will get us to our goal. Given what we’re up against, which is climate change, we don’t have the luxury to only take action when we have all the answers.”

A version of this article was originally published on September 5. It has been updated.