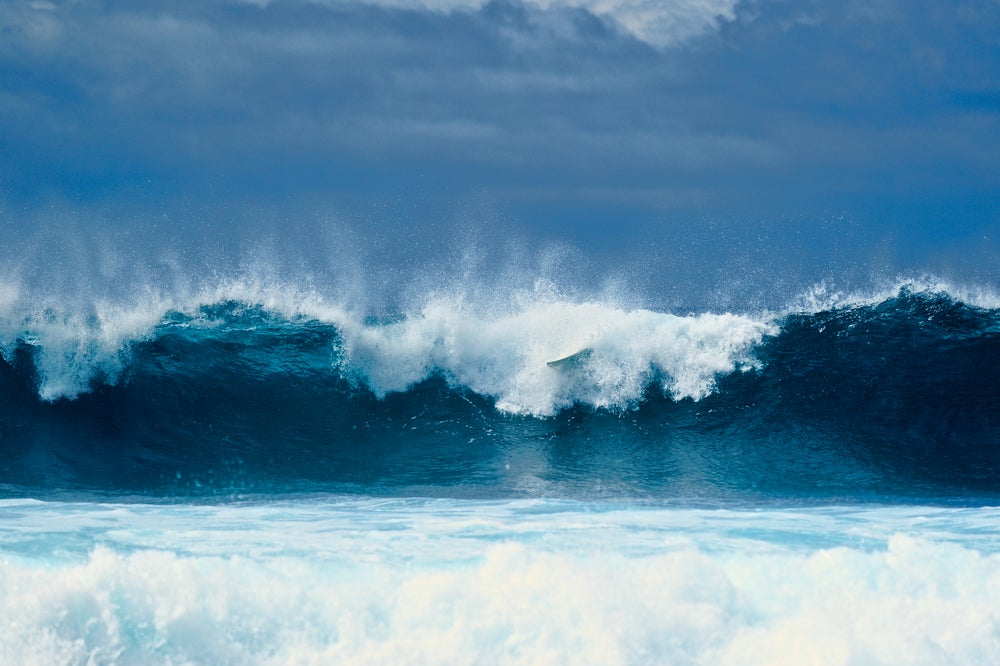 Is there anything as soothing as the sound of ocean waves? For many people, no, but for climate scientists, those waves are worrying. A new study from researchers at UC Santa Cruz gives everyone more cause for worry: it directly connects how strong waves are with ocean warming. “Upper-ocean warming, a consequence of anthropogenic global warming, is changing the global wave climate, making waves stronger,” the paper reads. Stronger waves could mean faster coastal erosion and greater flooding at the places already most immediately impacted by climate change.

Wave power is a measurement of the relationship between wind energy (basically, how the wind is blowing and how warm it is) and the upper ocean. Waves occur largely because of this relationship. The researchers found that wave power has risen globally by 0.4 per cent since 1948. Some areas have seen bigger increases than others, but they’ve all seen increases.

Climate change is driving global temperatures upward, and “most of the… heat imbalance is going into the oceans,” says Borja Reguero, a UC Santa Cruz environmental engineer and the paper’s lead author. There, it becomes part of the big cycle of winds and water that shape the wave climate. Looking at wave climate, therefore, can tell researchers about climate change and how it’s going to affect our planet.

It’s long been known that certain kinds of weather events, like El Niño, influence how big waves get. But whether climate change, which is a global phenomena, has an impact on all waves, hadn’t been conclusively shown until now. Reguero, who has been working on questions of wave power since his PhD., collaborated with his former advisors on this new paper, which shows a direct link between wave strength and warming oceans.

The research relied on a historical wave climate analysis he produced previously, as well as mathematical modelling of future trends. Besides the finding that global wave power has increased over the last 80 years, the data also showed that higher and lower latitudes—the North Pacific and the Southern Ocean—will be more affected by increasing wave power.

Still, this finding “is going to affect coastlines around the world,” says coastal scientist Gary Griggs, who is also a professor at UC Santa Cruz but was not involved with the current paper. Griggs said that the use of observational data alongside modelling gave him faith in the paper’s findings.

Being able to plan for stronger waves is vital for climate change adaptation planning on coasts, which are some of the most vulnerable regions to climate change. “Wave power and wave action is a key driver of flooding and erosion,” says Reguero. “Wave actions also influence where we build coastal infrastructure,” including things like breakwaters, he says.

At COP24, the recent international climate change planning conference, climate adaptation and how it can save lives was a key feature of conversations about how to mitigate the effects of climate change. Reguero questions whether current predictions for the fate of coastlines take into account increased wave power, and says more planning is needed to anticipate this.

This paper augments a known hazard—extreme weather—which is and will remain one of the most visible effects of climate change in the coming years, Griggs says. “In the [short and] intermediate term, maybe up until mid-century,” he says, storms and weather volatility will be “far more damaging than [0.1 to 0.15 inches] a year of sea level rise.” Increased wave power will make storms more violent and more dangerous, and planning for it may help mitigate the impacts.

However, adaptation isn’t the only way that this new information can be used, Reguero says. Wave power measurements, taken by satellite, can also be climate change indicators. That means tracking wave power can tell us about what’s happening with the climate—key as countries work to reduce emissions and the human race faces its biggest-ever existential threat.