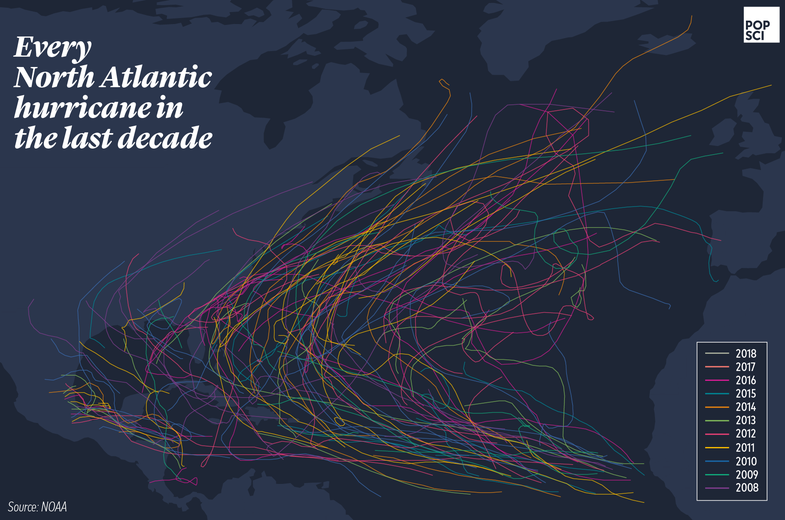 For a long time, climate scientists weren’t sure whether global warming had an effect on large-scale storms like hurricanes and tropical cyclones, but in recent years they’ve established that rising temperatures really are making the storms worse. It’s difficult to track, though, and it’s even more difficult to determine exactly how much humans are contributing to the problem. Hurricanes have always been destructive—how much more destructive are they becoming?

To help you visualize it, we put together a few graphs to illustrate the changes.

Last year, Hurricane Harvey killed 82 people and caused $180 billion in damages, largely due to the immense rainfall. Researchers estimated that warming due to climate change increased the storm’s precipitation by about 38 percent. A total of 34 trillion gallons of water fell on the area during Harvey, which a geophysicist told Popular Science would be enough to press the Earth’s crust down by more than half an inch in some places.

That’s just the most recent example, but extreme rainfall events have been increasing for years. The top 1 percent of them carried 71 percent more rain in 2012 than they did in 1958. Warmer ocean temperatures make surface waters more likely to evaporate into the low-pressure systems that turn into cyclones, increasing the moisture inside the storm system that will later fall as precipitation. This chart shows how once-rare events (those exceeding the 1-in-5-year event threshold) have become more common in recent decades. These intense rains can also occur outside of large storms like hurricanes, so the damage they do isn’t limited to hurricane season.

Wind speed is picking up

The increased condensation inside hurricanes from warmer oceans further lowers the pressure, and that allows the storm system to suck air in harder and faster. Though there’s a lot of variability from storm-to-storm (and even year-to-year), the average wind speed has been rising. As the mean has gone up, so has the number of category 4 and 5 storms (hurricanes are ranked by their wind speed).

Storms are costing us more, literally and figuratively

Part of the reason for the rising number of billion-dollar disasters is the increase in wealth and population, according to researchers at the National Oceanic and Atmospheric Administration, but it’s also that climate change is fueling stronger storms with more flooding, and that flooding is moving farther inland (there are also more wildfires, but we’ll leave that for another article). Tropical cyclones accounted for more than half the losses sustained from 1980 to 2017.

Historically, most hurricanes have stuck to hitting the lower half of the Eastern seaboard. But with increasing temperatures in both the air and ocean, experts say these paths might shift farther north. Jim Kossin, an atmospheric scientist from the National Oceanic and Atmospheric Administration, told Popular Science that this could be disastrous—these places aren’t used to being in the direct paths of tropical cyclones, and are thus the least prepared to deal with it.