The Future Of Energy Is Blowing In The Wind 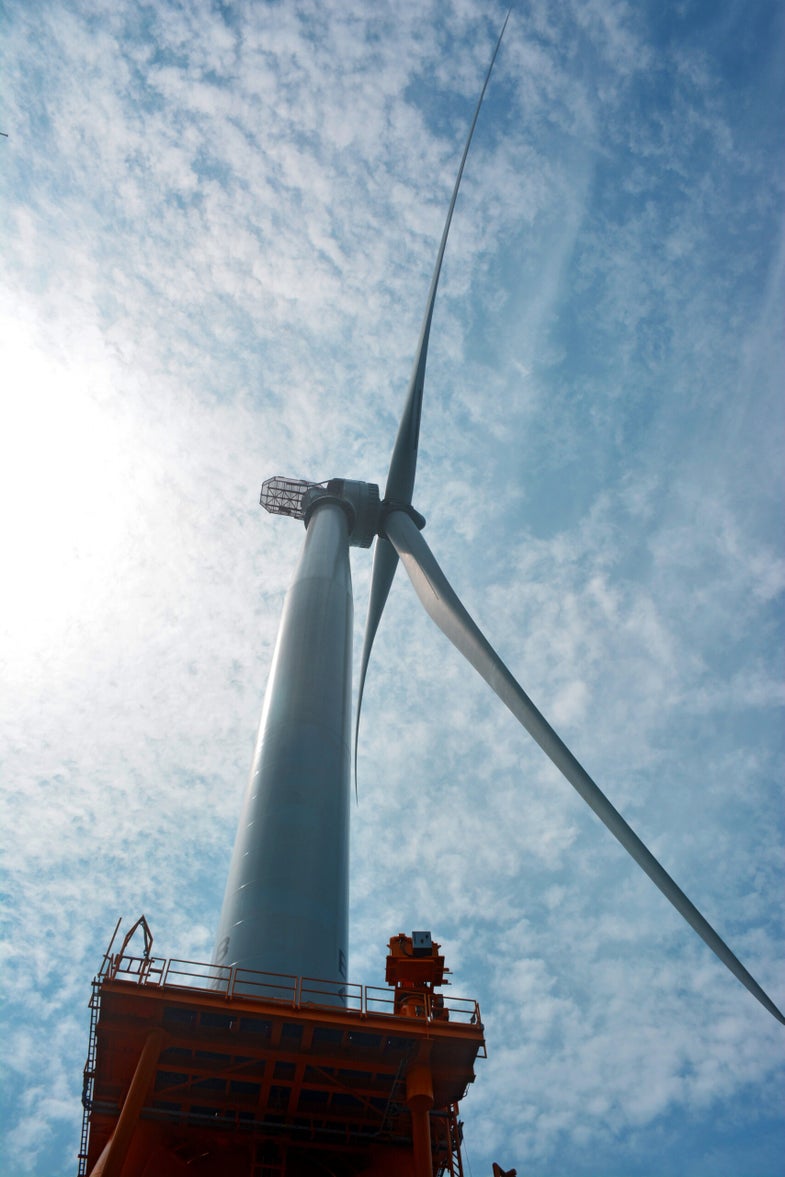 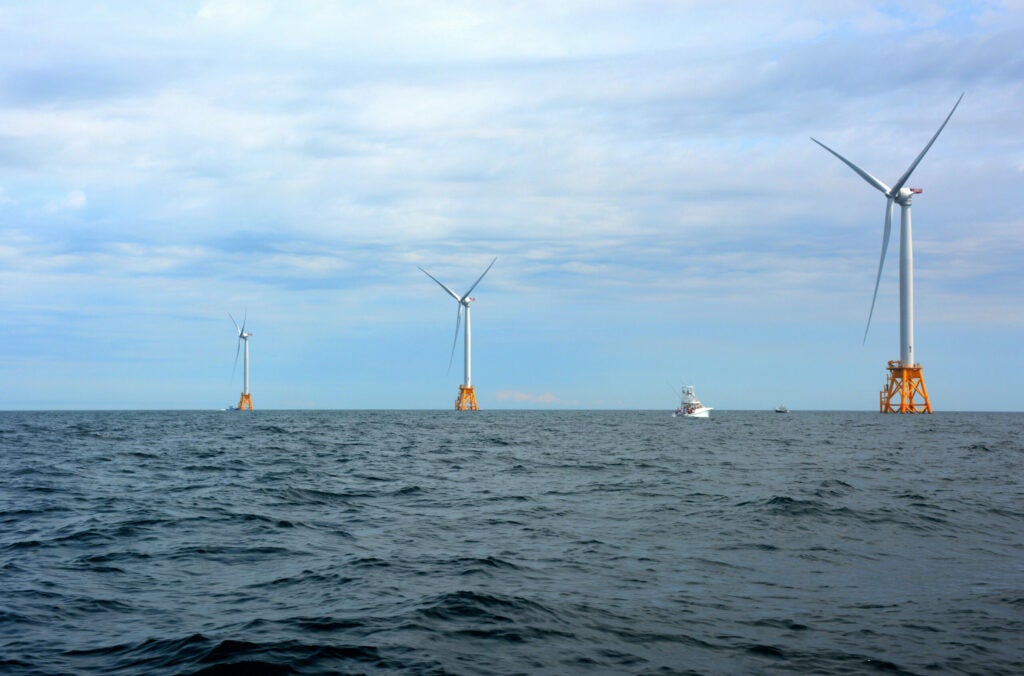 Turbines on the horizon

Leaning over the ferry railing, a passenger can just make out the four completed turbines in the distance, three-and-a-half miles off the coast of Block Island. The industrial grey towers are distinct from the hazy blue of the summer sky, and the grey green waters of the Atlantic, but not by much. At this distance, they are an extension of the busy seascape, populated with ferries from the mainland, fishing and pleasure boats, and the occasional adventurous parasailer.

The turbines are part of the recently constructed Block Island Wind Farm, the first offshore wind farm in the United States. The pilot project pales in comparison to the massive offshore wind farms of Europe and Asia, but it is a start.

A Department of Energy assessment of the potential for offshore wind energy found that there were over 320,000 square miles of water off our coasts that could be used to generate 4,150 gigawatts of electricity if it was completely utilized. For comparison, the capacity of all energy plants in the entire United States measured 1,100 GW in 2012.

It’s a huge potential source of power, but first someone has to show that it can be done. States from around the country, but particularly nearby Massachusetts, New York and other Northeastern states are watching the Block Island project to see how the experiment turns out. 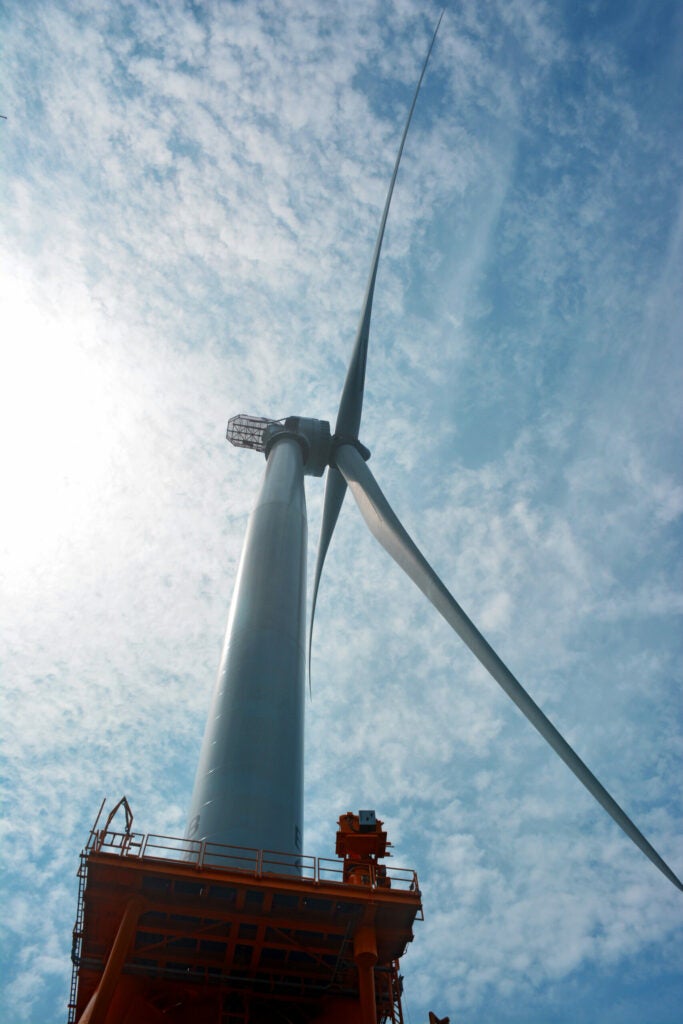 The turbines are 589 feet tall

Away from the rocky jetty protecting the harbor, the shoreline softens into vegetation and hills dotted with houses and inns. Then, suddenly the island falls away into bluffs topped with a lighthouse. Beyond that, the turbines rise, gracing the horizon in a long curve like fence posts without a fence.

Closer to the bright yellow foundations, the grey spires are giants, towering over even large vessels at a height of 589 feet. At the base of the turbine, it’s easy to imagine you’re standing at the foot of a tripod from War of the Worlds.

The construction of the final fifth turbine was completed in mid-August, and during construction, there was another giant on the seas. The Norwegian “Brave Tern” is a massive ship that journeyed across the Atlantic to help install the five turbines. It’s an installation ship that’s known as a Windcarrier, and looks like a cross between a small aircraft carrier and an oil rig, hovering above the sea on four adjustable legs. 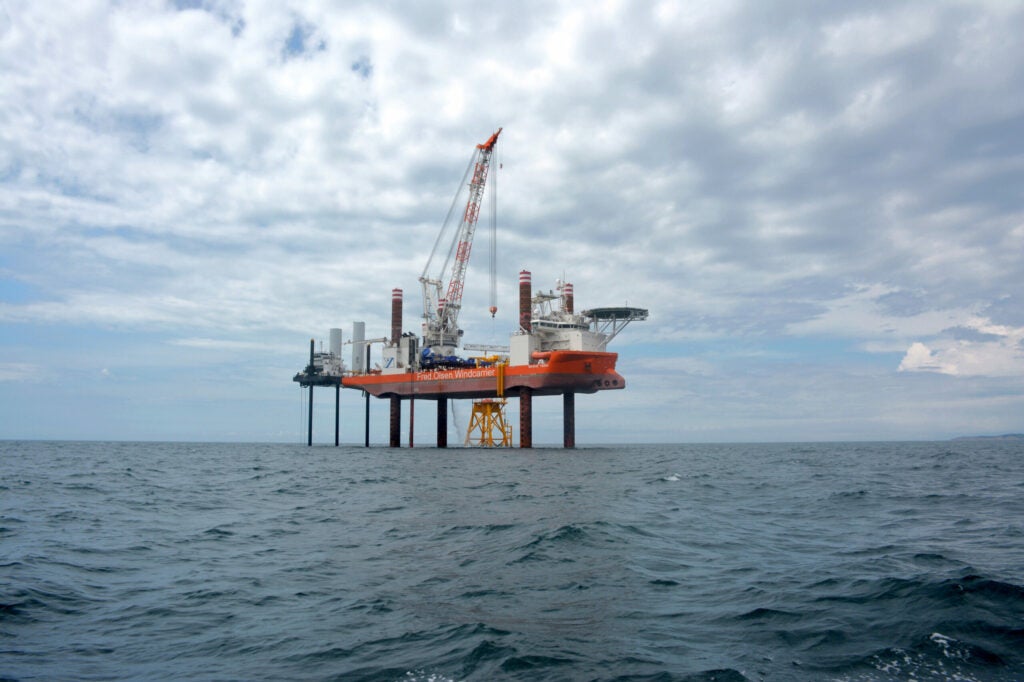 The Norwegian windcarrier used to install the offshore turbines. Just behind the Brave Tern is a smaller support vessel that ferried parts of the turbines from the harbor to the construction site.

The Brave Tern has a crane onboard that helped erect the turbines, hauling the pieces of the tower into place onboard the steel platforms that were constructed last summer. It’s a job that no other ship in the United States could do–because this is the first offshore wind farm in the United States, a lot of the support infrastructure (like the Brave Tern) has to be imported.

The turbines came into being as an international collaboration. Constructed in pieces in France, Spain, Denmark, and Louisiana, the GE Haliade turbines had a long, global journey from drawing board to completion (not in the least because the design was first owned by Alstom, a French company of which its power division was recently purchased by GE).

GE Project Director Eric Crucerey told Popular Science that the project involved 8,000 cases of calculations spread out over a year in which workers with GE were designing the high-tech turbines.

The turbines operate with direct drive technology, eliminating the need for a gearbox, which in older models helped connect the spinning blades of a turbine to the generator.

The hope is that with fewer moving parts, like the gears in a gearbox, there will be less opportunities for something to go wrong, reducing the amount of maintenance needed on the offshore structures.

These turbines are designed to be independent, with each one operating autonomously. The turbine can sense the wind and adjust the position of its giant nacelle and even the tilt of individual blades to most efficiently catch the wind.

“Each machine is alone on the ocean, but it is connected to many offices,” Crucerey said.

Though the turbines are capable of operating autonomously, progress will be closely monitored by the local energy companies, GE, and Deepwater Wind. In addition to monitoring the progress of the energy created, the various stakeholders will also be watching to see how the turbines hold up in the harsh waters of the North Atlantic.

The turbines are built to withstand the everyday waves and winds, and are painted with coatings to weather the corrosive salt spray, and to slough off any ice that might form on the blades in the winter. The turbines are also built to withstand natural disasters expected on the East Coast, like hurricanes, and less expected disasters like earthquakes.

Because there is so much computing equipment held inside the towers, the central tower has a slightly positive air pressure compared to the outside air. That means that stray bits of salt spray (dangerous to any electrical equipment) can’t enter the tower along with workers.

Workers will have to do periodic maintenance on the turbines, making the short journey out to the turbines by boat, scaling the steel base via a ladder, and then traveling through the turbine’s tower by elevator. It’s unlikely that a worker will be out at the turbine in a storm, but just in case, there are backup plans to evacuate the workers safely. Every worker and visitor that goes up into the turbine must go through a training course that details the way to get out in an emergency.

“There are plenty of systems to make sure that this [an evacuation] is not happening, but we have to consider everything,” Crucerey says. There are two ways off; by the helipad, or with a manual rappelling system operated from the helipad.

“You go up to the helipad, you attach yourself to the system,” Crucerey smiles and pauses for effect. “Then you jump.” 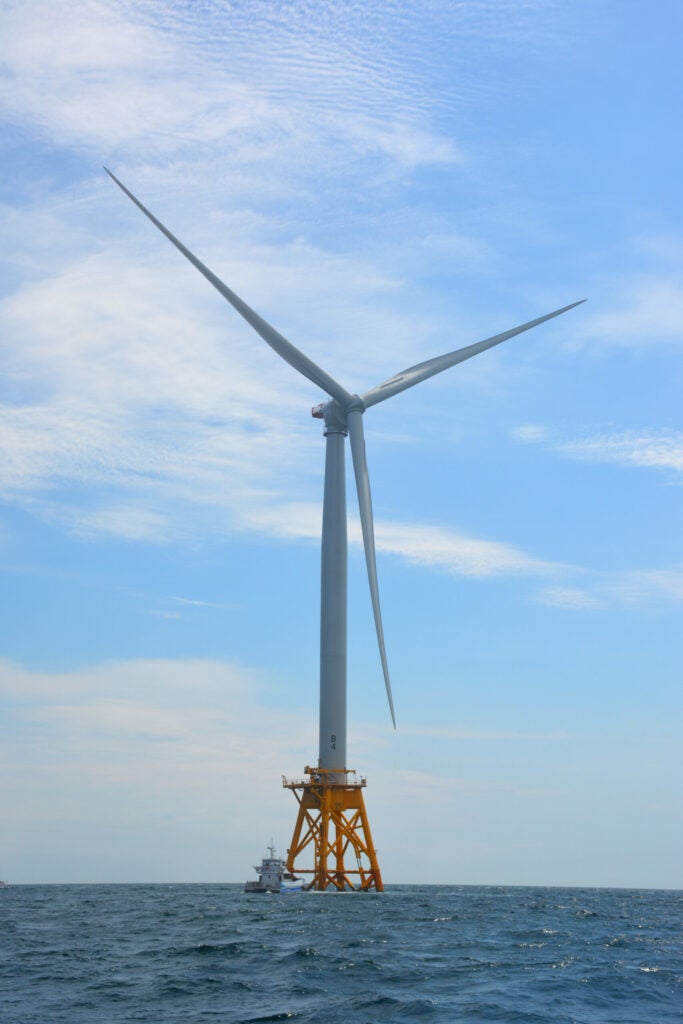 A support vessel approaches the base of one of the towers. Each tower houses electrical and computing equipment that lets the turbines function autonomously.

A Leap Into the Future

In a way, this project is a leap into the unknown for the energy markets in the United States. The turbines mark a first for renewable energy advocates, but there are critics who decry the appearance of the wind farm as an eyesore and lament the high cost of the wind energy.

Deepwater Wind says that the five turbines, which will provide power to both Block Island and the mainland, will reduce the power bills paid by Block Island residents by forty percent. Block Island used to have some of the highest power rates in the country and currently gets its power from diesel generators, one of which caught fire this summer.

The state’s Utilities Commission has agreed to purchase the power from the wind farm for the next 20 years, and while the estimated cost might be less than Block Islanders are used to paying, it’s more than what others are used to. A lawsuit over that purchase agreement alleged that the power from the wind farm was still going to be vastly more expensive than power created by more traditional power generation methods on the mainland. That lawsuit was dismissed earlier this summer, but the relative costs of energy produced by the wind farm in the future remains to be seen.

Then there’s the initial cost. Building the infrastructure, including the turbines, and connections between the turbines and the country’s energy grid, is expensive. Energy company National Grid constructed a $107 million cable from Block Island to the mainland, which will transfer excess energy from the wind farm to the mainland on windy days, and energy from the mainland to the island when the weather is calm. Deepwater estimates that the cost to build five turbines was about $300 million. Future projects, with many more turbines, would likely have an even larger bill.

Still, moving forward is usually an expensive proposition, and many other states and locations are clamoring to invest in projects like the Block Island Wind Farm. 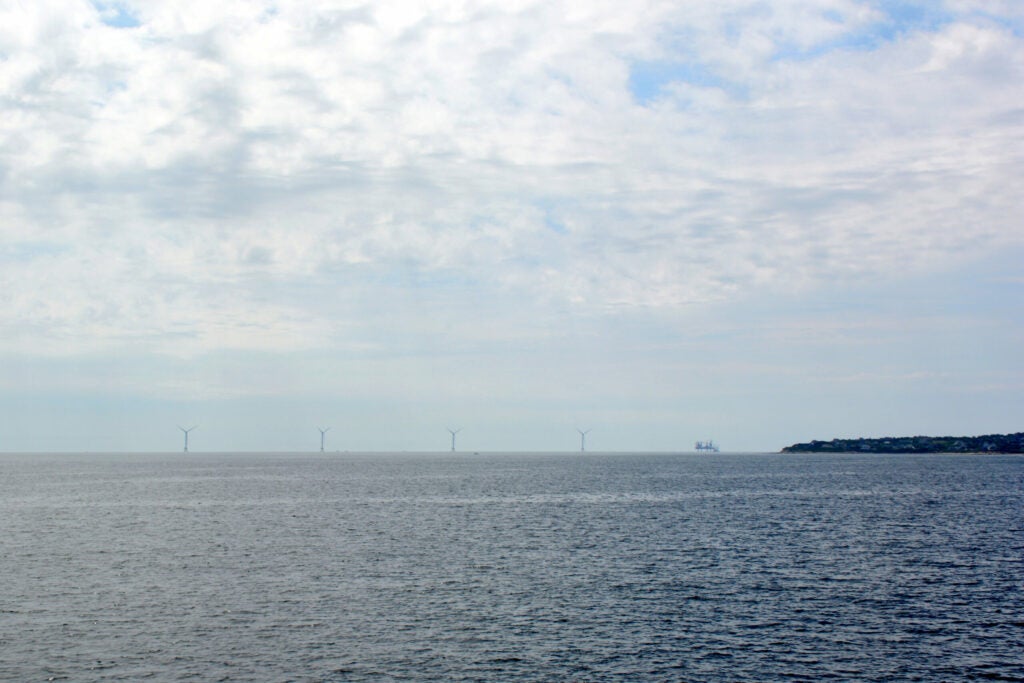 The wind farm and the Brave Tern off the coast of Block Island.

“This a first beachhead for the offshore wind industry in the United States,” Walt Musial, manager of Offshore Wind at National Renewable Energy Laboratory (NREL) says. “I see this as the first of many projects that are coming to the United States now.”

Musial, who has been leading the program in offshore wind at NREL for the past 12 years noted that there are several offshore wind projects in the works, but this is the first that managed to get to the construction phase.

The next project to enter the construction phase will be a 90-megawatt (15 turbine) installation off of Long Island, also constructed by Deepwater Wind. That farm is expected to be situated 30 miles offshore, at distance that places the turbines over the horizon, rendering them invisible from shore, and nullifying concerns over the appearance of the turbines on the seascape.

But it is expected that other offshore wind farms will be entering the fray soon too. Earlier this month Massachusetts passed a bill that directs energy companies to look towards offshore wind for power. New York recently passed a similar measure that mandates that the state will get 50 percent of its energy from renewables by 2030. The push to reduce greenhouse gases from electricity generation is a driving force that may be pushing policymakers past concerns over the initial cost and towards a greener future.

“These state driven policies are generally creating the incentive to begin those first projects and then in that development we would expect the emergence of a supply chain and the infrastructure necessary to sustain the industry,” Musial says.

In terms of offshore wind, the United States is behind in some areas when compared to Europe and Asia–but it’s not that far behind.

“It’s never too late,” Musial says. “When you look at the resource area offshore wind is adjacent to some of the largest population centers in the country, and the largest electricity loads in the country. It may be very convenient to bring that power in.”

Cities like New York and Boston have limited land area, making them unsuitable for traditional land-based renewable energy options like dedicated solar or wind farms, and their demand is high. But both cities are located on the coast and are absolutely power-hungry. New York devoured a record amount of electricity on August 15, using 11,855 megawatts to power a vast number of air conditioners as the city suffered through a heat wave.

Though the Northeast is furthest along in looking at offshore wind, other regions like the Great Lakes, Pacific Northwest and Hawaii are not far behind.

Technologically, the next step might be floating offshore wind turbines, which places like the West Coast–with their deep water just off the coast and frequent earthquakes–see as an alternative to the seafloor-anchored designs that are only now gaining a footing on the coasts off the United States.

But for now, the turbines are slowly turning at the Block Island Wind Farm and the wind farm anticipates generating power for the island by November and delivering power to the mainland as early as January. We’ll see then if the current continues to jolt the offshore wind industry to life.