It's just the latest environmental rollback. 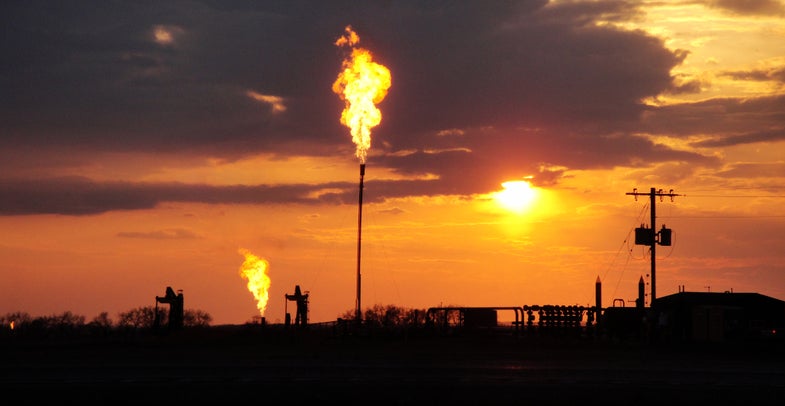 California and New Mexico have sued over the Trump administration’s latest rollback of climate change protections to curb greenhouse gas emissions. The challenge came hours after the Bureau of Land Management, an agency within the U.S. Department of Interior, finalized a rule Tuesday letting companies off the hook for reducing air pollution from methane gas released during oil and natural gas production on federal lands.

The final rule is just one of three “common-sense standards” set by the Obama administration on the oil and gas industry that the Trump administration is trying to discard, says David McCabe, an atmospheric scientist with the Clean Air Task Force. In addition to changing how the Bureau of Land Management rule regulates new and existing oil and gas operations on federal and tribal lands, the administration is focused on easing Environmental Protection Agency regulations of new oil and gas sites, as well as existing sites in areas with air pollution violating national standards.

Methane, the main component in natural gas, is a greenhouse gas 28 to 36 times more potent than carbon dioxide per ton over a 100 year period and 86 times more potent than carbon dioxide in the shorter term. Methane is also a public health hazard: it reacts with nitrogen oxides under sunlight to form ozone, better known as smog, which exacerbates asthma and other respiratory diseases and makes it more difficult for people to breathe.

The Bureau of Land Management’s mission is “to sustain the health, diversity, and productivity of America’s public lands for the use and enjoyment of present and future generations,” according to the Bureau’s website.

Oil and gas produced on public land made up about nine percent of domestic natural gas production and five percent of U.S. oil production in 2017, according to the Bureau of Land Management. Methane escapes from leaky infrastructure or emitted as a waste product.

“A typical scenario is when you’re drilling an oil well and you’ve also got natural gas that comes up,” says Robin Cooley, a staff attorney at Earthjustice. When there isn’t a pipeline in place yet to collect the excess natural gas, the company will burn it (a process known as flaring) or vent it directly into the air. It’s “incredibly wasteful” since methane is a valuable natural resource that can be captured and sold, Cooley says.

Operators reported releasing 426 billion cubic feet of natural gas between 2009 and 2015, according to the Interior’s Office of Natural Resources.

In 2016, the Obama administration passed a waste prevention rule requiring oil and gas facilities that operate on federal lands to increase how much methane gas they salvage rather than burn or vent. The rule also required producers to inspect equipment for infrastructure leaks. The Bureau estimated the rule would cost the industry $100 to $280 million per year over 10 years, but reduce annual methane emissions by up to 180,000 tons, producing an overall benefit of about $50 to $200 million each year.

However, the Trump administration postponed compliance deadlines while the rule was being challenged in court by industry groups and several western states and while the Bureau worked to get rid of the rule.

The Bureau’s replacement, finalized this week, argued that waste prevention doesn’t “require an operator to lose money capturing and marketing uneconomic gas.” The Bureau also calculated that the costs to industry of reducing methane waste outweighed the benefits to society from mitigating climate change—if you look domestically rather than globally—and that cutting methane pollution for public health and environmental reasons exceeded the Bureau’s regulatory authority and overlapped with the EPA’s responsibility.

A week before, the EPA proposed a rule that would reduce how often oil and gas producers needed to inspect new well sites, from twice a year to once a year or once every two years. It would also give producers 60 days instead of 30 days to make repairs. The change would save industry up to $75 million a year, the EPA said, but release 380,000 tons of methane, 100,000 tons of volatile organic compounds, and 3,800 tons of hazardous air pollutants between 2019 and 2025.

“We’re at a time when the dangers of climate change are ever more clear,” Cooley says. “This administration is just being dangerous and irresponsible by rolling back climate change regulations.”